Many Large US Firms Sell, Hire and Invest More Overseas Than in Us and They Have to Think Globally, Not Domestically, to Survive

Policies that force globally-oriented US companies to operate with domestic focus make no sense and hamper trade.

The table below (click to enlarge) is based on financial data included in the World Investment Report 2017, a report produced annually by the United Nations Conference on Trade and Development (UNCTAD) and just released with data for 2017. Table 19 of the UNCTAD report lists the world’s top 100 non-financial “Multinational Enterprises” ranked by foreign assets in 2017, and the table below features the 20 multi-national corporations (MNCs) in that group that are headquartered in the US. Displayed below are: a) foreign assets, b) foreign sales, and c) foreign employees, both alone and, most importantly, as shares of the global totals for those three items for the 20 US-based companies. Those items with shares above 50 percent are displayed below in bold. 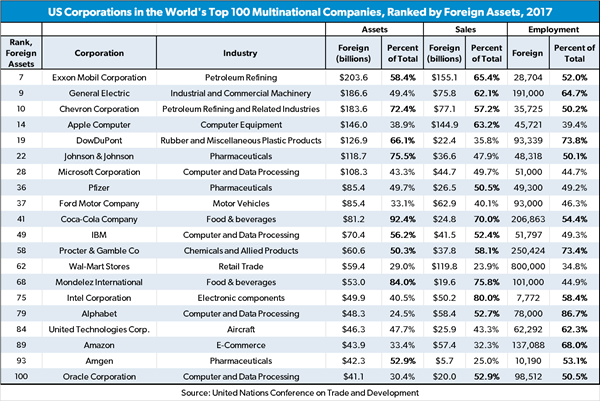 Here are some key points from the table above:

Most Business Does Not Happen in the US

To remain competitive and profitable in an extremely competitive global marketplace, US firms have to operate as efficiently as possible and produce their products at the lowest possible cost to survive. The long-term viability and sustainability of US MNCs forces them to minimize production costs for their customers in global markets, and sometimes that requires them to shift production overseas, possibly to take advantage of lower labor costs, lower taxes, or more favorable regulations. It’s also frequently the case that expanding production and manufacturing operations overseas takes place to better serve retail markets outside the US and the 95 percent of non-American global consumers.

It makes perfect economic sense for those US-based MNCs to source, manufacture, and assemble a large share of their production overseas.

Last year, Intel generated $4 in foreign sales for every dollar in domestic sales, and Mondelez, Apple, Exxon, and Coca-Cola generated close to $2 or more in foreign sales for every dollar of sales in the US. It, therefore, makes perfect economic sense for those US-based MNCs to source, manufacture, and assemble a large share of their production overseas since such a large majority of their sales take place in foreign markets and not the US market.

In the current nationalistic, jingoistic “America First” politically-charged climate, we’ve seen the Protectionist-in-Chief routinely put political pressure on large MNCs like Intel, Coca-Cola, or Apple to shift production of their products to the US where labor costs and corporate taxes are higher, and where production is moved further away from the retail markets where those products will ultimately be sold. Corporate decision-making that is based more on political pressure than sound economics and business considerations could disrupt those companies’ carefully orchestrated and maximally-efficient global supply and value chains. To the extent that Team Trump is successful at pressuring US companies like Intel and Apple to shift production from overseas to the US for shallow political purposes, it could put those companies at a competitive disadvantage globally by forcing them to incur higher operational costs.

Saddling American firms with political burdens that force firms like these to think domestically rather than globally isn’t a formula to make America great.

It’s important to recognize that large US-based MNCs like the ones in the table above (but also hundreds of other large US multinational firms) operate in a hyper-competitive international marketplace—they produce and sell their products globally, they hire workers globally, they invest in capital assets, infrastructure and real estate globally, and they compete with foreign rivals in an intensely competitive global marketplace. US-based MNCs are already exposed to constant risks, challenges, and gales of Schumpeterian creative destruction, which force them to focus relentlessly on operational efficiencies and low production costs to survive, and they have to make decisions at the global level to compete with their foreign rivals and maintain or grow market share.

Saddling American firms with additional, unnecessary, and avoidable political burdens, uncertainties, and risks from a protectionist, nationalist, jingoistic xenophobic, “America First” administration that forces firms like those in the table above to think domestically under political pressure rather than globally for economic reasons isn’t a formula to make America great. It’s a formula that’s guaranteed to make American companies weaker and the country poorer, and in the process eliminate, not create, more jobs for US workers.