The law is causing worse problems than it solves

It’s rush time for fraternities and sororities on college campuses right now. That means dressing up, networking, socializing, attending parties, and staying up late nights. It also means, whether parents know it (or like it) or not, astonishing amounts of drinking of very potent liquor. One of the most famous “drinks” is called “jungle juice”: trash barrels filled with random spirits and mixtures, consumed one red cup at a time.

Many of these kids are away from home for the first time, able to drink to their heart’s content. A huge culture as grown up around this practice, including a full vocabulary, games, and rituals. Mostly it is just fun, but it can also lead to serious trouble for everyone involved. Let’s not be squeamish: it leads to very un-adult-like amounts of personal abuse and, often, the abuse of others.

Doubling down on a bad rule, rooted in the idea that laws can change human desire, is not a workable solution.Most of these kids have never been socialized in what it means to drink responsibly. They are living for the thrill that comes with defiance. The combination of new freedom, liquor, and sexual opportunity leads to potentially damaged lives.

How do these kids get away with this? In fraternities and sororities, it all happens on private property, not public and commercial spaces, and so campus police can look the other way. Most everyone does.

Indeed, being able to drink with friends, and unhampered by authority, is a major appeal of the Greek system on campus. It’s a way to get around the preposterously high drinking age. Getting around this law will consume a major part of the energy and creativity of these kids for the next three years.

As for everyone else who cannot afford to join, it’s all about a life of sneaking around, getting to know older friends, lying and hiding, pregaming before parties just in case there is no liquor there, and generally adopting a life of bingeing and purging, blackouts and hangovers, rising and repeating. And so on it goes for years until finally the dawn of what the state considers adulthood.

For an entire class of people, it’s the Roaring Twenties all over again.

It’s all part of Prohibition’s legacy and a reflection of this country’s strange attitudes toward drinking in general. The drinking age in the United States (21), adopted in 1984, is one of the highest in the world. Countries that compare in severity are only a few, including Indonesia, Kazakhstan, Cameroon, Oman, Pakistan, Qatar, Sri Lanka, Tajikistan.

Most of the rest of the world has settled on 18 for liquor and 16 for beer and wine. In practice, most European countries have very low enforcement of even that. Somehow it works just fine for them. 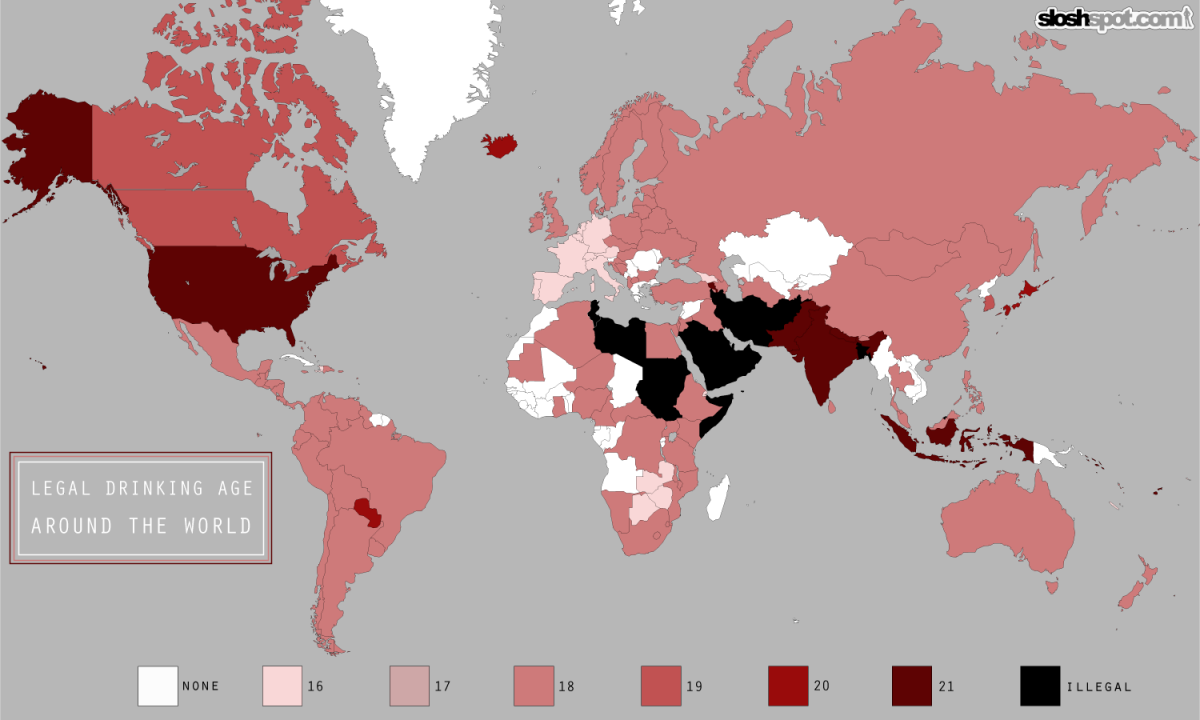 The consequences of this draconian law have been terrible for American society. Teenage drinking is a gigantic part of American life, all done surreptitiously and mostly without responsible oversight. The market for fake IDs is ubiquitous and diffuse. Everyone in the United States has a story of kids and their abusive habits, their strategizing, their hidden flasks and risky games, their constant maneuvering to do what they know they are not supposed to do.

The drinking-age law would surely be a winner in a competition for the least obeyed law. The notion that this law is accomplishing anything to actually stop or even curb teen drinking is preposterous. Instead, we see all the unintended effects of Prohibition: over-indulgence, anti-social behavior, disrespect for the law, secrecy and sneaking, and a massive diversion of human energy.

People speak of a rape crisis on campus, and whatever the scope of the problem, the fact that women under 21 must retreat to dorm rooms and frat houses to drink puts them all in a vulnerable situation. It’s hard to imagine that consent is really there when people are falling down, passing out, and feeling mortified the next day about what happened. In fact, the law represents a true danger to women in particular because it prohibits legal access to safe public places to drink responsibly, and go home to a safe environment afterward.

There is an organization of college administrators who are fed up. It is called the Amethyst Initiative. Currently, 135 colleges have signed support for a lower drinking age. Their goal is not to encourage more drinking but to recognize the unreality of the current law, and how it has led to perverse consequences on campus.

You know the situation has to be extremely serious to get this risk-averse crowd on board. Their statement reads:

A culture of dangerous, clandestine “binge-drinking” — often conducted off-campus — has developed. Alcohol education that mandates abstinence as the only legal option has not resulted in significant constructive behavioral change among our students.

Adults under 21 are deemed capable of voting, signing contracts, serving on juries and enlisting in the military, but are told they are not mature enough to have a beer. By choosing to use fake IDs, students make ethical compromises that erode respect for the law.

It’s not just about campus. It’s about teens and drinking in general. The law requires them to hide in private places. Such clandestine meetings can lead to compromising and dangerous situations without reliable public oversight.

It’s also about business. Convenience stores and bars, in particular, have been put in a strange position. They have been enlisted to become the enforcement arm of an unenforceable policy, which has meant haranguing customers, inventing new systems for ferreting out violators, turning the servers into cops, confiscating IDs, and creating an environment of snooping and threats in a place that should be about service and fun.

The only path toward restoring sanity in teenage drinking is greater liberty. Why isn’t something done to change this? Those who are most affected have the least political power. By the time they figure out the ropes in American political life, they are turning 21 and so no longer have to deal with the problem. In practice, this means that there is no real constituency pushing for reform of these laws. That’s why they have persisted for 30 years without serious pressure to change, despite the obvious failure they have been.

There is some movement at the state level. In Missouri, longtime state representative Rep. Phyllis Kahn has worked for a lowering of the drinking age in her state. She has an interesting take on whether this would mean that the state would have to give up 10% of federal highway funds (the threat that the feds used to force states to raise their drinking ages). In 2012, a Supreme Court ruling on Medicaid clearly stated that the federal government could not coerce states by withdrawing funding to force legislative action at the state level.

Other activists have said that even if the federal highway funding is cut, the increase in revenue from alcohol sales (and decline in enforcement costs) could make up a lot of the difference.

Regardless of the financing issues, current drinking-age law is unenforceable and destructive. The reality is that kids are going to drink. Denying that and imposing ever more draconian punishments doesn’t fix the real problems with alcohol.

Bringing it into the light, rather than driving it underground, is the best way to solve binging and abuse. Doubling down on a bad rule, rooted in the idea that laws can change human desire, is not a workable solution.

The choice between virtue and vice is a human choice. Relying on the government to make this choice for us disables the social order’s internal mechanisms for bringing about and rewarding responsible behavior. It seems like a paradox, but it is true: The only path toward restoring sanity in teenage drinking is greater liberty.