We look at pictures of newspaper boys from 1905 and say, “Oh how sad that these kids had jobs. We are so much more humane now!” 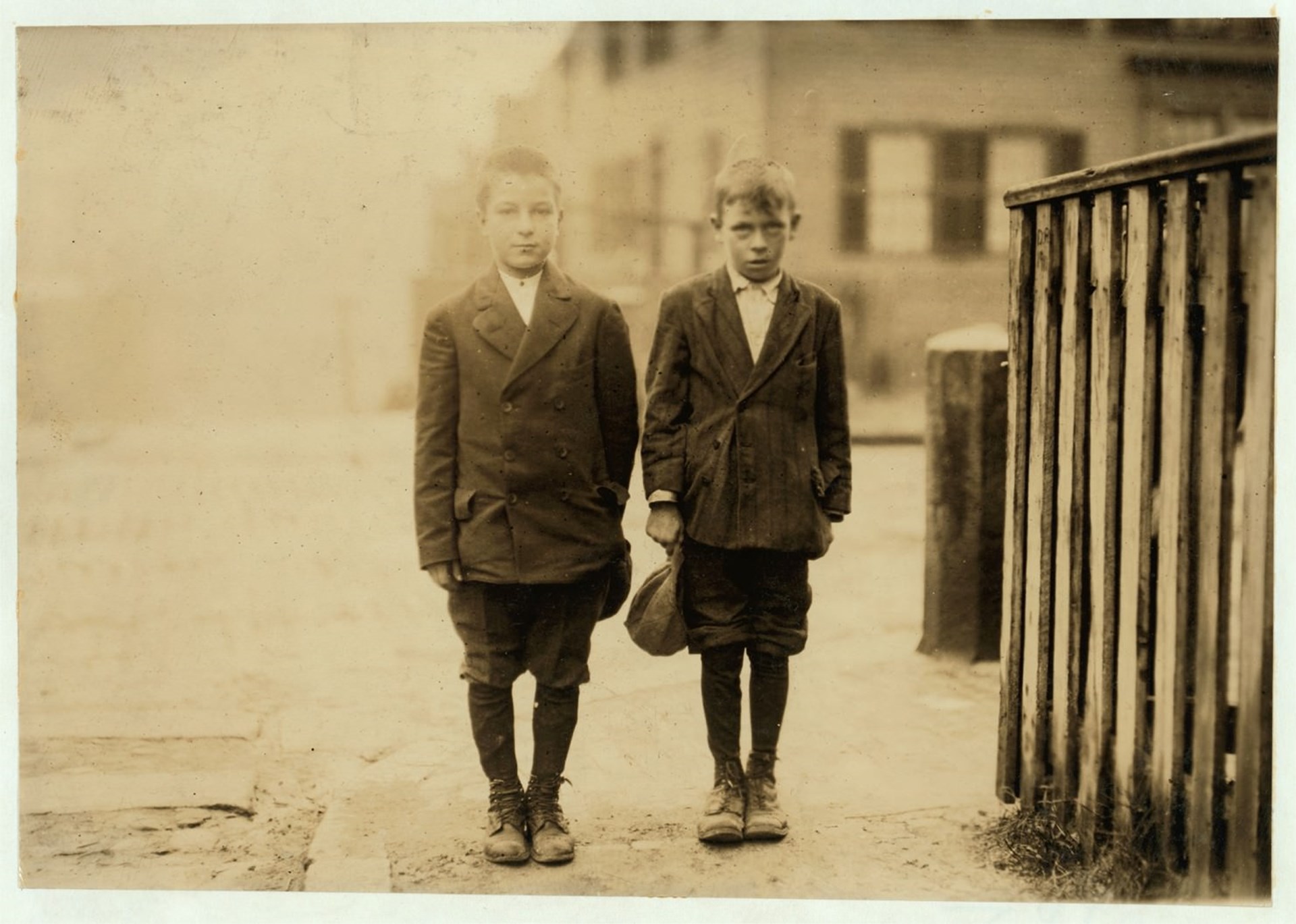 The Washington Post ran a beautiful photo montage of children at work from 100 years ago. I get it. It’s not supposed to be beautiful. It’s supposed to be horrifying. I’m looking at these kids. They are scruffy, dirty, and tired. No question.

But I also think about their inner lives. They are working in the adult world, surrounded by cool bustling things and new technology. They are on the streets, in the factories, in the mines, with adults and with peers, learning and doing. They are being valued for what they do, which is to say being valued as people. They are earning money.

Whatever else you want to say about this, it’s an exciting life. You can talk about the dangers of coal mining or selling newspapers on the street. But let’s not pretend that danger is something that every young teen wants to avoid. If you doubt it, head over the stadium for the middle school football game in your local community, or have a look at the wrestling or gymnastic team’s antics at the gym.

And I compare it to any scene you can observe today at the local public school, with 30 kids sitting in desks bored out of their minds, creativity and imagination beaten out of their brains, forbidden from earning money and providing value to others, learning no skills, and knowing full well that they are supposed to do this until they are 22 years old if they have the slightest chance of being a success in life: desk after desk, class after class, lecture after lecture, test after test, a confined world without end.

Yes, I know, the Washington Post montage is our periodic reminder of the horrors and brutality of the age of capitalism. Oh, look how exploitative it is! These poor children are being chewed up and swallowed by a powerful capitalist machine that cares nothing for their health and well-being! For all you people who think that government isn’t so wonderful, look at the world you would recreate should kids be allowed to work again! Let’s never go back, they say.

The market, not a Progressive armed with government power, does these things. It inspires innovation and disperses them to the masses. Why are we isolating this one aspect of teen work and condemning it as hell on earth? By comparison today, everything except the absence of the income tax was hell on earth.

And there is a fundamental historical error associated with all these nightmare images of the past. What the photos don’t reveal is that it was the market, not the government that reduced and nearly eliminated full-time grueling child labor. Corey Iacono lists the myth to the contrary as one of the greatest of all time, and cites the professional historian consensus: “Industrialization and economic growth brought rising incomes, which allowed parents the luxury of keeping their children out of the workforce.”

The laws against child labor didn’t achieve national codification until the Fair Labor Standards Act of 1938, by which time machines had largely displaced the labor children had done generations earlier. It was also a useful change in the law from a political point of view. It helped shore up the power of labor unions against cheaper wage competition. An entire demographic had been deleted from the workforce and pushed by compulsion into government holding tanks for a full decade.

It’s not at all obvious to me why this should be something to celebrate.

And let’s be clear about the relationship between child labor and compulsory school. It is direct. It was at the very time that governments at the state and local level were banning labor for kids that these same kids were subjected to force in making them go to school. You can talk all you want about capitalist exploitation but it makes no sense to overlook a situation surely as problematic: any kid not in his or her school desk was subjected to be kidnapped in the name of enforcing laws against so-called truancy. A system that worked without coercion was displaced by a system that depended fundamentally on coercion.

But Let’s Get Real

All those photos dig deep into the past and conjure up weird dystopian scenarios, none of which have anything to do with today. If kids were allowed to work and compulsory school attendance was abolished, the jobs of choice would be at Chick-Fil-A and WalMart. And they would be fantastic jobs too, instilling in young people a work ethic, which is the inner drive to succeed, and an awareness of attitudes that make enterprise work for all. It would give them skills and discipline that build character, and help them become part of a professional network.

Young people are forcibly kept out of the workforce and then we are shocked to discover that they have a hard time getting into their groove at 23.These attitudes are rather missing from today’s young people just entering the workforce. They are forcibly kept out and then we are shocked to discover that the average college graduate today has a hard time getting into his or her groove at the age of 23. It’s because their human right to work and earn has been violated for a good part of their lives, to the point that they have lost interest in and knowledge of what work is like at all.

When I was a kid, you could get around the laws if you knew the right people. Or you could just lie about your age. No more. The laws are heavily enforced, and any employer who hires underage is subjected to terrifying penalties. In theory, you can work from the age of 14, but the hours and tasks are so restricted, and the paperwork so vast, that it is not practical. Same with 15. By 16 you can get a job, but the hours are still restricted and the type of work you can do is still limited. You are not really free until you are 18 years old, and, by then, there is too much fun to be had by doing something, anything, other than work. Is it any wonder that they turn to music, pop culture, drugs, alcohol, promiscuity, internet trolling, and so on? Idle hands, as they say.

A century ago, we invented a system that imagined children as civic soldiers. Kids bolted to chairs with absolutely no skin in the game have abstract “information” pounded into their heads by tax-paid instructors who teach from state-approved books.

We push these kids through the system and deny them any chance to realize their human value in gainful employment in a community of productivity and real learning. Then we tell them to scrape together $100,000 for yet another degree that will somehow gain them entry into the workforce, but all these demoralized and cynical kids end up with is an empty CV and 15 years of debt.

Then we look at pictures of newspaper boys from 1905 and say, “Oh how sad that these kids had jobs. We are so much more humane now!”

It’s time we stop congratulating ourselves for taking away opportunity from kids. It’s time to let the kids work again.