As this new mode of transportation grows in popularity, regulators should put some basic rules in place and leave the rest to innovation and common sense.

Following the explosion of ride-sharing businesses like Uber and Lyft across the country, motorized scooters are arriving in metropolitan areas. With dockless vehicle companies such as Lime, Bird, and Ofo each receiving multi-billion dollar valuations, it is time to treat scooters as a respected component of city transportation.

Initially, it appeared that bike-share kiosks were going to dominate the market of cheap, maneuverable transportation in high-density areas. Projects such as Washington D.C.’s Capital Bikeshare and New York’s Citi Bike were replicated across the country. In 2017, Bay Area startups Spin and Limebike and Chinese company Ofo brought in new dockless bikes, enabling riders to start their trips wherever they could find a bike and end them where they pleased. Now, motorized dockless scooters have joined the dockless bikes. Riders simply have to push buttons to move vehicles rather than exert energy by pedaling.

Because of the rapid pace at which dockless scooters have risen to prominence in cities from San Francisco to Washington, D.C., some local governments have had little chance to regulate. However, in Miami, Nashville, and Indianapolis, city councils have responded with cease and desist orders.

Despite the enthusiasm from riders, legitimate concerns exist about safety and aesthetics. By their nature, dockless scooters (and bikes) are left on sidewalks, potentially blocking businesses, pedestrians, and traffic. If left in front of stores, an unsightly buildup of scooters could deter potential customers. Some bikes and scooters appear abandoned and rusting on walking trails and in far reaches of metropolitan areas.

But regulation that punishes companies before they can solve problems will only stifle innovation that could make these products better.

Scooter companies must be held to a high standard of accountability when it comes to ensuring proper parking of their vehicles. Requiring liability insurance and the timely removal of unused scooters are two ways to ensure public safety while not limiting innovation. But regulation that punishes companies before they can solve problems will only stifle innovation that could make these products better.

San Jose has required that scooter companies provide discounts to low-income residents and allocate scooters to “communities of concern,” even if demand in these areas is low. By implementing such restrictions, local government officials are signaling that they want to oversee the distribution of scooters. Los Angeles has adopted a policy incentivizing—rather than coercing—companies to serve these communities by offering bonus permits for those who operate in these areas.

Some cities have limited the number of scooters. San Francisco has set an initial limit of 1,250, and Austin allows 500 scooters per licensed vendor. While well-intentioned, these caps ignore fluctuations in the market and seasonal considerations. Companies have no reason to oversaturate the market, as the costs involved with maintenance and collection rise with additional supply. If the vehicles are not being used, the companies make lower profits.

For example, the company Bird has self-enforced a “Save Our Sidewalks” policy that requires scooters to be used at least three times a day to stay in circulation, and the company has agreed to pay cities $1 per scooter per day to fund new bike lanes and other transit infrastructure. Cities that set caps are losing this potential investment.

Competition encourages further innovation and lowers prices. Charging high fees to scooter companies disproportionately affects new startups. Dallas has a reasonable charge of $808 for an initial company permit and $21 per vehicle, while Santa Monica charges a steep $20,000 registration fee plus $130 per scooter. 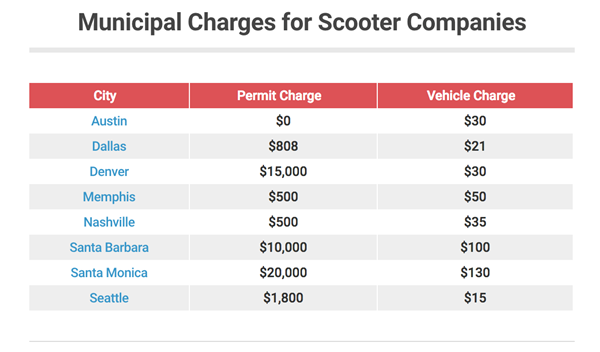 Companies want to ensure their scooters are not causing congestion problems, as customer satisfaction and maximizing profits are the driving factors behind any business decision. This is the case in San Diego, where the local government has taken a laissez-faire approach to the scooter revolution. Without instituting new restrictions, problems have decreased. Riding in unauthorized areas has been reduced since police started handing out citations, and the scooter company Lime has begun public education campaigns to get people off the sidewalk and to wear helmets.

In addition to providing opportunities for riders, scooters offer work opportunities that could benefit low-income individuals who want jobs. Someone has to relocate and charge these vehicles, creating a side flow of income for residents who are paid to move scooters out of harm’s way. For instance, Bird pays “Chargers” $5 to $20 per scooter, allowing some entrepreneurial individuals to make hundreds of dollars every night.

With benefits ranging from increased accessibility to reduced emissions, scooters can add value to cities across the country. Ironically, many of the cities that have pushed most vigorously for environmentally-friendly policies also have the strictest scooter restrictions. Regulators should put some basic rules in place and leave the rest to innovation and common sense.