The Netflix original series demonstrates just how powerful the market can be.

As an avid Tina Fey fan, a large portion of my own personal admiration stems from her frequent skewering of “sacred cows.” While presented in a different style, her “no one is immune to criticism” attitude is comparable to the political commentary found in Trey Parker and Matt Stone’s long-running South Park, which has left no politician unscathed when it comes to its content.

Fey, perhaps unknowingly, makes the case for using capitalism to change the world.

Politics has a keen ability to divide the country into factions, especially this most recent election season where individuals have doubled down on their preexisting views, leaving no room for compromise or civil discourse. It is precisely for this reason that writers like Stone, Parker, and Fey have become a breath of fresh air for viewers who have recognized the hypocrisy that exists within the entire political sphere, regardless of party affiliation.

Fey’s performance as Sarah Palin may have become a symbol for the 2008 Presidential Election, but her mockery does not stop at right-wingers. While Fey most likely considers herself part of the Hollywood left, she sees humor in both sides which is why her current project, The Unbreakable Kimmy Schmidt, is currently much needed in a country desperately in need of a laugh.

The Netflix original series and brainchild of Fey, in which she also occasionally guest stars, has been extremely popular since its first season debuted in 2015. Its third season, which premiered a week ago, is arguably its best yet and displays Fey’s continued comedic insight into all corners of society.

From questioning the overuse of the term “privilege,” to mocking the right wing’s obsession with shallow patriotic tradition, nothing is off limits when it comes to the show — including political correctness. But in one particular episode, meant to poke fun at the hardline right wing Trump supporters, Fey, perhaps unknowingly, makes the case for using capitalism to bring about a desired social change, something that is far from leftist in practice.

Using the market to bring about social change is an admirable lesson to preach.

Jacqueline Gets Her Groove

Kimmy Schmidt’s strongest creative component is the unique characters the show highlights. Reuniting with her 30 Rock costar Jane Krakowski, Fey has created a character who is the epitome of a blonde trophy wife, but as the seasons unfold, there is a surprising depth to Kimmy’s friend and former employer, “Jacqueline White.”

After breaking off a marriage that allowed her to live a luxurious, albeit lonely, life Jacqueline attempts to assert her independence and take on the world alone. While she may seem like your typical first world, upper-class female, viewers soon come to learn that this is just a facade. Through phone calls made to her family, we learn that Jacqueline is the black sheep of a very traditional Native American family. In one scene, we see Jacqueline pop out her blue contacts to reveal dark brown eyes that she has worked so hard to conceal.

Her family hardly takes her seriously, especially since she has fought so hard to leave behind her true roots. However, in season three Jacqueline proves herself to her family when she is successful in convincing the owners of the Washington Redskins to change their name to something less offensive to her heritage.

On the surface this may seem like a typical display of leftist PC culture, but regardless of how you feel about the name of the team, using the market to bring about change, especially social change, is an admirable lesson to preach, even if it is masked in modern liberal undertones. 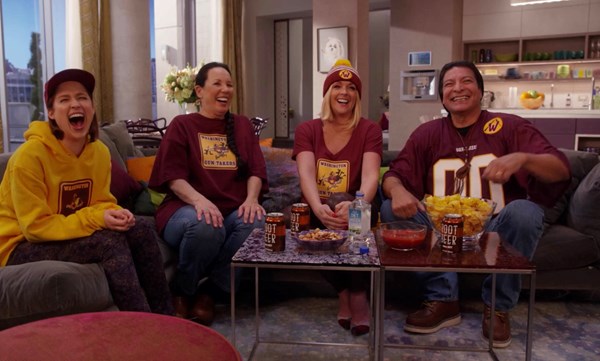 After falling in love with the black sheep of a wealthy family, portrayed by David Cross, Jacqueline learns that her new beau’s family are the owners of the Washington Redskins. Wanting to take a stand and make her family proud, she and her new love interest decide to take on the family and demand a change to the team’s name. Unfortunately, Cross’ character is “smooshed” by a car and falls into a coma before their plan goes into effect.

His family, who is more taken with Jacqueline than the son they view as an outcast, arranges for the two to get married mid-coma, which, due to the suspended reality of television, is able to occur without any ethical complaints.

As a legal member of the family, Jacqueline is now able to fight the team’s name change from the inside.

While on her way up to an owner’s meeting, Jacqueline runs into her parents who have traveled a great distance and are protesting and chanting “change the name!” She is all too excited to tell them that she is taking the team down from the inside when she notices that the protesters are burning large amounts of Redskins merchandise.

Inquiring as to how much was paid for the jersey’s being thrown into the makeshift bonfire, her father tells her that each jersey is $250, but that he would have gladly paid more just to feed the offensive cloth to the flames.

Suddenly Jacqueline realizes that the only way to change the owners’ minds is to find a way to make the name change profitable and desirable for all parties involved. Unfortunately just as she has this epiphany, she discovers that the other owners have switched the time of the meeting intentionally to avoid dealing with her activism.

Having only five minutes to make it to the top floor of a New York City skyscraper and preying on their dedication to nationalism, Jacqueline calls upon another splendid character, Titus Adromenon, a hopeful, but mostly failed, musical theater performer.

Knowing that the other owners are bound by tradition and will not conduct any business during the National Anthem, Jacqueline calls Titus and tells him to “sing the Star Spangled Banner, and really milk it!” which is then broadcast over a loudspeaker. While Titus is performing this over dramatic and very long version of our national anthem, she is able to make it to the meeting in the nick of time.

Composed of stereotypical conservatives who are committed to red meat, God, and their guns, the owner’s board has only one female, who comments that “Americans don’t kneel,” in reference to Colin Kaepernick’s infamous decision to kneel in protest during the national anthem showing exactly where their principles lie.

Rage is a hot selling point.

Catching her breath, Jacqueline addresses the owners, “what is the single most important thing to everyone in this room? Money!”

Garnering the room’s undivided attention, she explains how Colin Kaepernick had the number one selling jersey the previous year, specifically because he was the center of controversy.

Consumers either bought the jersey to show support for the professional athlete, or they bought the jersey to destroy it as a form of protest. Either way, consumers were purchasing Kaepernick merchandise in droves, while the team sat back and watched the profits pour in.

Jacqueline explains that “anger” is a hot selling point and that there is money to be made off of the atmosphere of rage seething throughout the country because after all:

She then segues into her proposal to rename the team, “The Washington Gun-Takers.” Just the suggestion of this name evokes strong emotions as the patriarch of the family stands up and exclaims, “Nobody takes my guns! I’d buy a jersey just to shoot it full of holes!”

Suddenly the lightbulb goes off and the entire room understands exactly what Jacqueline is trying to say.

By using market incentives, every single party involved wins. Those offended by the former name will bask in their victorious pursuit of justice and those who had no issue with the name will be bonded by their love of anger. Meanwhile, everyone is buying merchandise, either in support or protest of the new name — proving just how powerful market incentives can be.

Each week the cast of Kimmy Schmidt learns a new basic life lesson. While usually this involves learning how to Google or secure a job, this season the entire cast gets a primer in free market economics 101.