Kaepernick Is Right that America Has a Policing Problem. But Condemning American Ideals and Police Isn't the Solution.

I’m a fan of college football rather than the NFL, so I haven’t paid much attention to the controversy over players protesting against police misbehavior during the national anthem.

However, the topic is now trending. The 2018 season about to start and Colin Kaepernick is being featured in a new ad campaign for Nike, so I figure why not insert myself into the discussion. 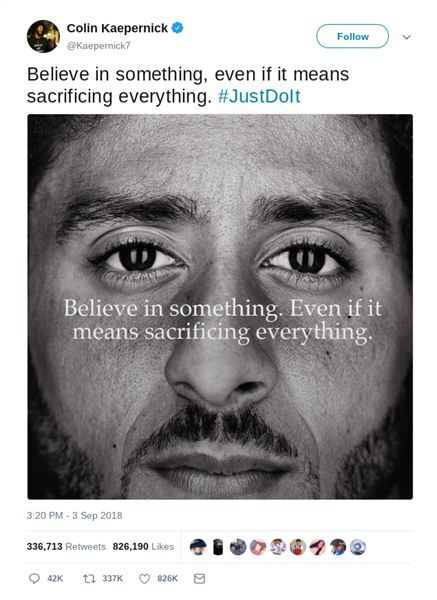 The bottom line is that Kaepernick and the other players have identified a very real and very important issue.

I’ve written on many occasions about the need for better policing.

Though I don’t think the problem is systemic racism or pervasive brutality.

Some of that exists, of course, but I assume the vast majority of cops want to do a good job and treat people fairly (except when giving me traffic tickets).

The real problem is that politicians have enacted far too many laws, many of which don’t make sense or don’t have any victims, and then they expect the police to use those laws to generate more revenue.

This is a recipe for more Eric Garner tragedies.

After all, the goal should be to change policy, not generate noise and controversy.

That being said, NFL players are not going to win the hearts of middle America by actions that can be portrayed as being anti-flag, anti-police, anti-military, and/or anti-country. Heck, they’re playing into Trump’s hands with that approach.

The players would have much more success (both in terms of the issue and with respect to their own popularity) if they portrayed their cause as one that affirms and extends American ideals.

NFL players should come up with some inclusive pro-America slogan about “The Constitution Protects Everyone” or “The Principles of the Founding Fathers Apply to All Americans.” And then they should be ostentatiously patriotic (in the proper sense), standing for the national anthem, with one hand over their hearts and one hand holding both an American flag and some sort of symbol of their campaign.

Trump would have a hard time attacking that kind of approach.

More important, I’m guessing a lot of Americans who heretofore have been rejecting the message of Kaepernick, et al, may start paying attention. And that would be the ideal outcome. After all, the goal should be to change policy, not generate noise and controversy.

For all intents and purposes, I’m suggesting the football players adopt the strategy Martin Luther King used when fighting Jim Crow laws. Dr. King explained that equality of law was an American principle. He embraced the Constitution and Declaration of Independence, even though slavery and other sins meant America was grossly imperfect at that point.

But he wanted an inclusive message. I hope that today’s NFL players copy that approach. Assuming, of course, they actually want better policing and a better America.

P.S. Until and unless there’s a better strategy, Nike will probably suffer the same adverse consequences as Dick’s, which lost customers after kowtowing to the anti-gun crowd. Irritating a big chunk of the buying public is not a wise idea.

P.P.S. I believe in a tough-on-crime approach, but only if laws are just.

P.P.P.S. If you want some cop-related humor, click here, here, and here.