The “fatal flaw” of neoliberalism, which “denotes a preference for markets over government, economic incentives over cultural norms, and private entrepreneurship over collective action,” is that it simply is “bad economics,” according to a new Guardian article penned by Harvard economist Dani Rodrik.

The one size fits all formula can be overly simplistic but that could be said for any economic philosophy.

Most of Rodrik’s article is thoughtful and nuanced. His primary criticism of “neoliberalism,” is that, “its customary remedies – always more markets, always less government – are in fact a perversion of mainstream economics. Good economists know that the correct answer to any question in economics is: it depends.”

He’s correct. The one size fits all “more markets, less government,” formula for economic policy can in many cases be overly simplistic and will not produce the best outcomes in every socioeconomic context, but that could be said for nearly any economic philosophy and really isn’t incredibly innovative as an argument.

It is, however, worth noting that one of the reasons why many “neoliberals” advocate for less government intervention in the economy is precisely because they don’t trust a centralized state authority to have the proper knowledge to know when it is appropriate to intervene, and to what degree, in the interactions between millions or even billions of consumers and producers.

Much of the rest of the article gives the reader the impression that Rodrik is not being entirely fair to “neoliberalism,” as an economic philosophy. For one, in spite of his rebuking neoliberals for making sweeping economic statements, he himself claims that neoliberalism, “does not even get the economics right… it is bad economics.”

There are a great number of empirical studies that examine how neoliberal reforms affect economic development.

Rodrik also seems to downplay the importance of neoliberal reforms in the role of the success of countries like China whilst laying the blame for crisis or stagnation in Chile and Mexico entirely at neoliberalism’s feet. As observed by Noah Smith in Bloomberg, “Rodrik cherry-picks quite a bit.”

What Does the Research Show?

Importantly, there are a great number of empirical studies that have examined how neoliberal (i.e free market) reforms affect economic development that go unmentioned in Rodrik’s article.

For example, Wacziarg and Welch (2008), using quantitative analysis and a thorough review of country-specific case studies of economic liberalizations, find that liberalizing countries “experienced average annual growth rates that were about 1.5 percentage points higher than before liberalization.” 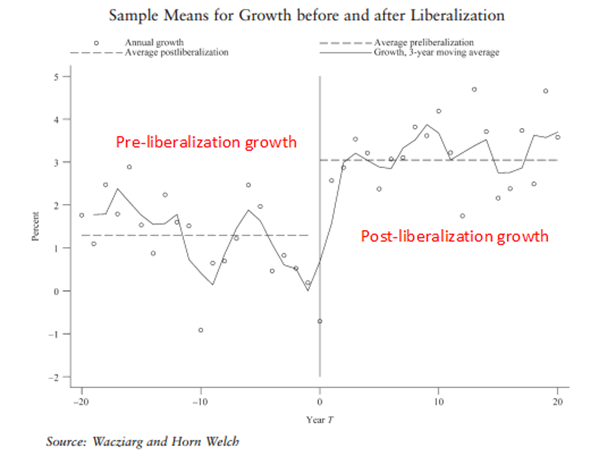 Estevadeordal and Taylor (2008) find that, on average, countries that engage in free trade reforms see considerable accelerations in economic development relative to the control group, such that the income per capita of the liberalizers is 25% higher after a quarter-century.

And while Chile’s free-market reforms imposed under the violent rule of Augusto Pinochet in the 1970’s initially produced disaster, the liberalization process did, in fact, continue, resulting in Chile becoming not only the freest economy in Latin America but one of the wealthiest as well.

Perhaps neoliberals do need to engage in a little introspection and be more open to the idea that free markets aren’t perfect and can even lead to calamity, but any honest examination of the evidence strongly suggests that, in general, the movement towards free markets has produced meaningful and beneficial results across the world. It isn’t a coincidence that the global shift towards the embrace of ‘neoliberalism’ has been accompanied by unparalleled reductions in global poverty, particularly in China and India.