No, Afghan Refugees Won’t Drive Up Crime in America

Reasonable people can disagree on how many refugees the United States should accept, but the mindset should be to take as many as possible, not as few.

Fox News TV host Tucker Carlson recently aired a 17-minute segment of moral outrage toward people who want to bring large numbers of Afghan refugees to the United States in the wake of the recent collapse of the Afghan government.

The segment is titled, “We are living through the biggest influx of refugees in history,” which in itself is an incomprehensible assertion given the reality that refugee admissions are at record lows. That’s Carlson’s first mistake.

Given the segment’s content, the intent appears to be to paint Afghan refugees in the worst way possible—as violent criminals who will ruin American society as we know it. Tucker points to Europe as proof of this.

“Afghan resettlement in Europe has been an utter failure,” Carlson said, before approvingly quoting a political scientist who claims that Afghan refugees are “notorious for barbaric attacks” on Europeans.

Even if that were true in Europe, that has not been the case with the United States. Population-size adjusted data on Afghan immigrants to the US shows they are almost twelve times less likely to be imprisoned than the average native-born American, implying low rates of criminality.

In contrast to illegal immigration to Europe, a refugee to the United States must undergo an arduous selection and screening process; a process which generally emphasizes the selection of refugees based on vulnerability-based criteria, such as prioritizing women and children.

In fact, 64 percent of all refugees admitted to the US are women or children under the age of 14. And estimates suggest that only 14 percent of the refugees resettled in the US in 2016 were males between the ages of 18 and 35 (i.e. the demographic with the highest propensity to commit crime.)

Even if we were to focus on foreign-born, working-age men specifically, the National Academies of Sciences, Engineering, and Medicine reports that this demographic group has crime rates four times lower than native-born, working-age men. Simply put: the data show that legal immigrants, refugee or otherwise, have comparable or lower crime rates than the native-born population. 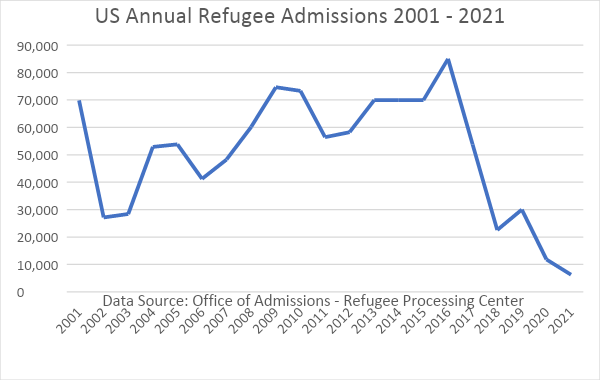 To illustrate the non-effect that refugees have had on crime and terrorism in the US, consider the following:

If it were true that refugees were a significant driver of crime, such a drastic policy reversal should have produced a clear effect on crime rates. And yet, a study published in American Political Science Review found that the policy change produced “no discernible effect” on violent crime rates.

Another study came to similar conclusions, failing to find “any statistically significant evidence” of an association between refugee settlement and crime or terrorism rates in counties across the United States. That’s mistake number two.

This question is odd considering that the vast majority (86 percent) of refugees globally are sheltered by developing countries, according to the United Nations Refugee Agency data.

Of the 2.6 million Afghan refugees that already existed prior to the collapse of the Afghan government, the overwhelming majority of them have sought refuge in neighboring countries like Pakistan and Iran. Over the last 20 years, the US has resettled a mere 20,841 Afghan refugees, or 0.8 percent of the total. In no stretch of the imagination is refugee resettlement a burden uniquely borne by America.

But given the United States’ status as a global superpower and our national relationship with the Afghan people, whom the US has fought a war against terror with for 20 years, our nation does bear a unique moral responsibility to accept the Afghan refugees who are desperately fleeing ultraviolent religious extremists.

Ultimately, reasonable people can disagree on how many refugees should be accepted, but the mindset should be to take as many as possible, not as few.