Ireland's Water Consumption Just Became a Tragedy of the Commons 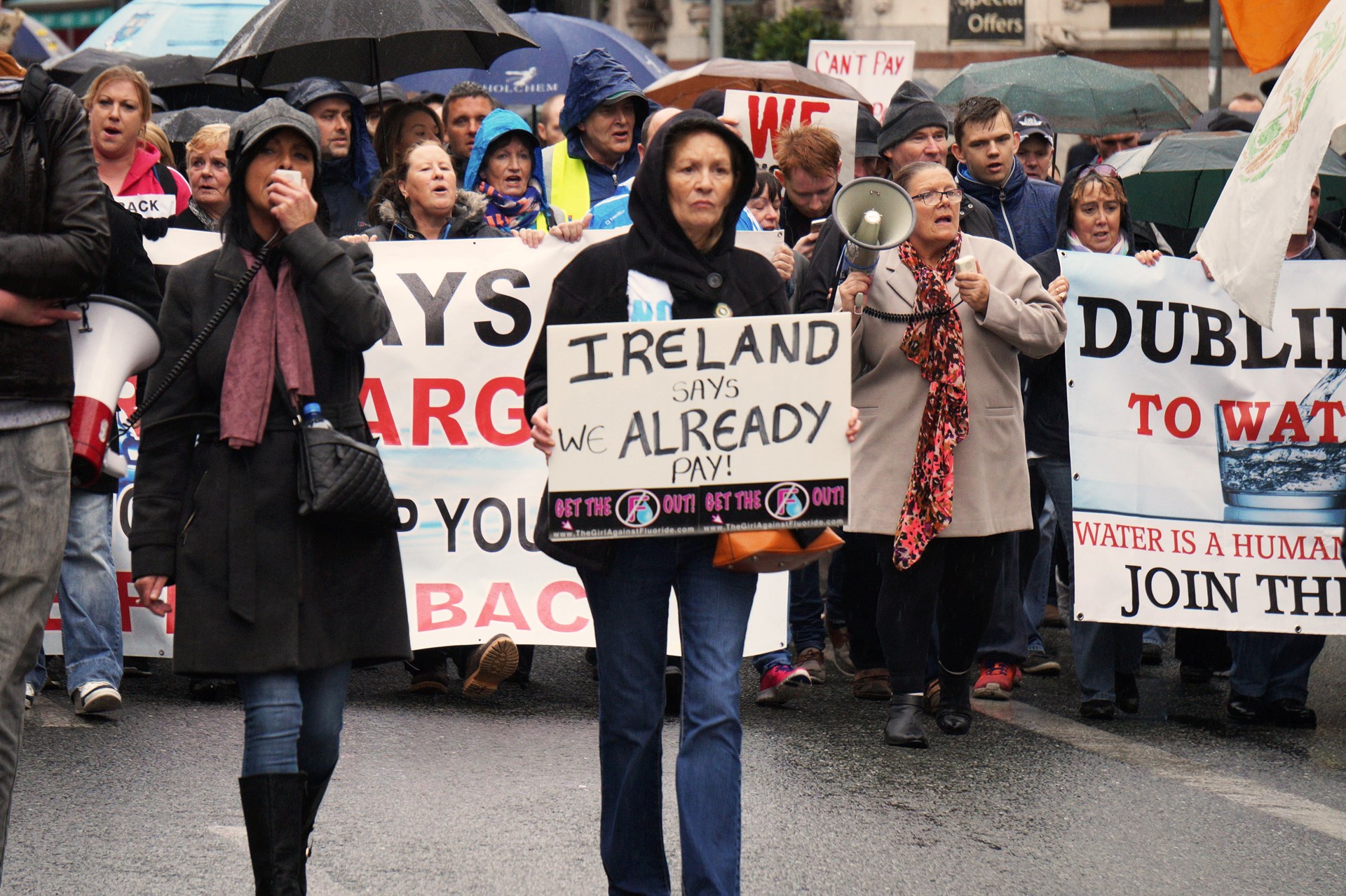 On the 13th of April, the Dáil (the Irish parliament) decided to get rid of the 2014-introduced domestic charging schemes for water consumption. The legislation had forced many Irish citizens to pay individual water charges, as opposed to water being a universal good provided solely through the government, free of charge. As the first bills arrived in January 2015, thousands of people took to the streets to protest what was perceived as austerity measures.

Anti-austerity activists called for simply boycotting the water bills.A considerable amount of activist groups are opposing the privatization of the state water supplier Irish Water, which was created in 2013. Until then, water supplies were managed by local authorities and paid for by taxes to the central government. Irish Water was supposed to take over the entire water-related infrastructure and introduce water charges in the long run. These charges, which billed the customer on his individual consumption, were highly controversial in the general population. Anti-austerity activists called for simply boycotting these bills, claiming that more than 70 percent of Irish people are already refusing to pay their charges. While that number is cannot be confirmed to be this high, it remains accepted that many thousand of households are withholding payments.

These protests have been inspired by a larger European movement in 2013, known as the Right2Water campaign, which opposed the attempt by the European Union Commission to allow privatizations on the European market and requested that the EU recognize water as a basic human right. As the European debt crisis was seriously troubling to the economies of Greece, Portugal, and Spain, the Commission had suggested that selling publicly owned water providers would help balance the budgets. The Irish government has been accused of maintaining similar reflections, even though members of the government have publicly claimed that this is not the case:

The minister said that while politicians may disagree over how to fund water services, "we share a common view on the State owning this vital public service." (Irish Examiner)

Ironically, the reasons given to criticize Irish Water make the case for its privatization in the first place: without competition, the publicly-run company couldn't care less about its waste. A staggering 47 percent of all water carried by Irish Water is lost in pipe leaks. The total amount of leaks is 76,000 – almost 9 percent of all water connections in the country. The government expects to invest €135 million on finding and fixing domestic leaks by 2021, and €300 million on replacing the leaking pipe network. This shows how the decade-long management by local authorities has ruined the service quality of water supplies.

Criticizing Dublin’s intention to privatize the water supply should seem especially odd when coming from the consumers themselves. Letting Irish Water socialize the costs of its inadequacy through the taxpayers will never incentivize them to increase quality. Meanwhile, local authorities have been proven to run up large amounts of debt when it comes to supplying the service.

These anti-privatization movements are also often supported by environmentalists, who reject the system of individual metering and internalizing consumption even though it lowers water consumption.

Water consumption in metered buildings in Ireland, Germany, and the UK all dropped by at least 10 percent.This is illustrated in the divide between public property and private property. This phenomenon is particularly clear considering the water consumption of apartment buildings. It is difficult to encourage water efficiency through price signals when costs are socialized, since owners and renters of multi-home buildings do not actually pay for their own consumption. An OECD report found that two-thirds of OECD member states meter more than 90% of single-family houses, yet for apartment buildings the report only mentions that “a few are metered.”

And there is more evidence supporting that individual metering of water reduces overall water consumption: in the United Kingdom, a study (Lis Stedman, Motivations for metering, Water 21, The Magazine of the International Water Association, April 2006) shows an instant drop of 10 percent in metered apartments, while the 1993 tap German water report (Trinkwasserversorgung in Deutschland, DIW-Wochenbericht 1993) shows an 18 percent lower consumption rate compared to apartments that were not metered.

After the introduction of water charges, water consumption in Dublin dropped by 20 million liters a month. Even though experts insisted that this might be an anomaly, they had confirmed the reduction in water consumption to be 10 percent overall. In 2016, the expected usage of 190 litres per day per person ended up only being 250 litres per household per day (just over 80 litres per person per day), 50 percent less than expected by Irish Water metering.

Tragedy of the Commons

The Irish water consumption is one big Tragedy of the Commons: collective financing of water charges increases inefficiency and water consumption overall. The Irish parliament's decision is regrettable: how long before politicians and the general public recognize that, when internalizing the costs of their own consumption, people tend to act more carefully towards the environment?