Intervening in a World in Turmoil Will Only Make Things Worse 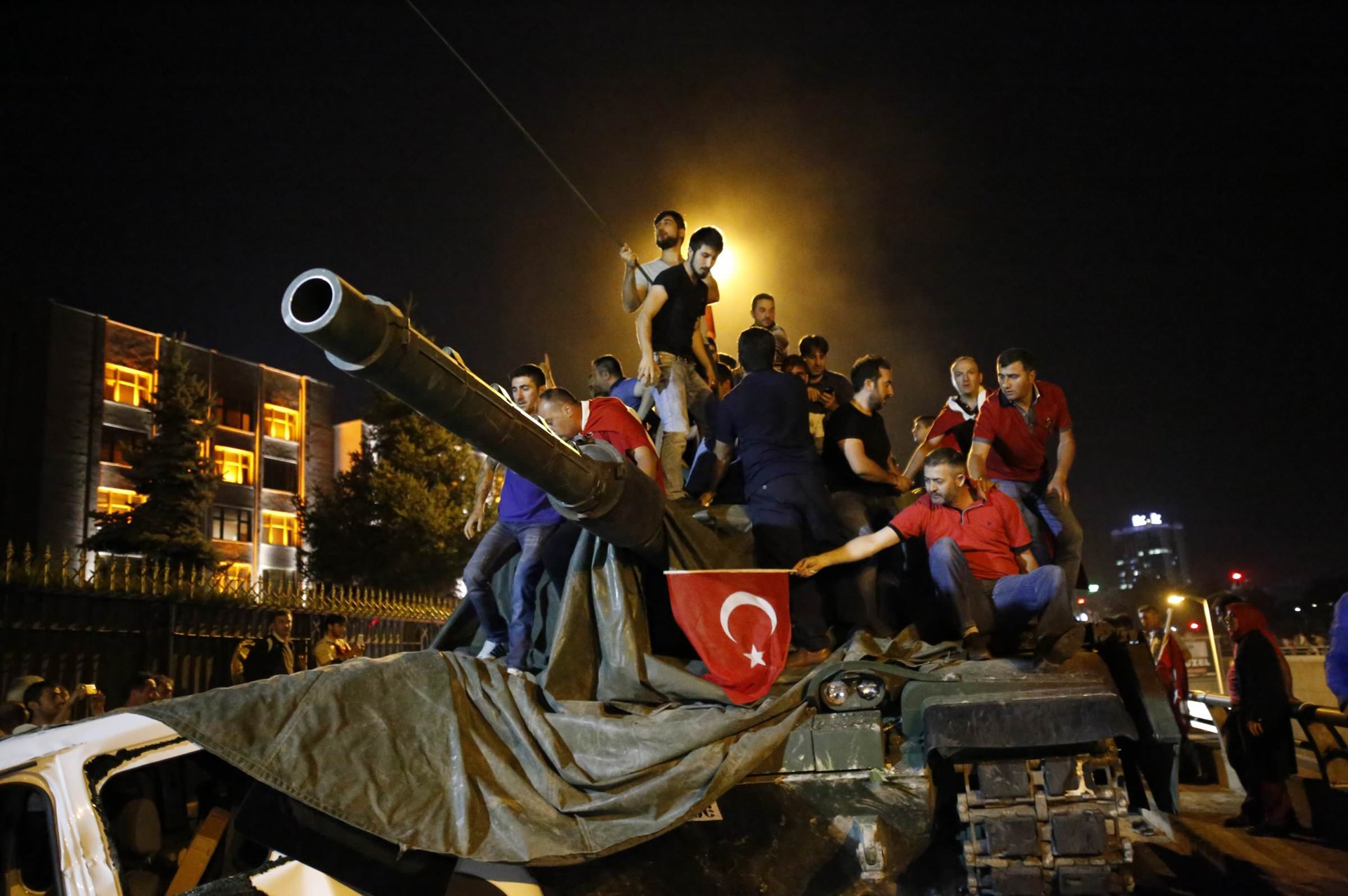 Turkey suffered through an attempted coup last week. So incompetent were the plotters that some people believed the country’s increasingly authoritarian president staged the incident to justify a crackdown on his political opponents: sort of a Turkish version of the infamous Reichstag fire under the Nazis.

For a few hours, however, Turkey provided a dramatic experiment for social scientists. However, it really shouldn’t have been of great concern to the U.S. government.

While there's no evidence America was involved, the folks in Washington had to be concerned about the coup since they desire to run the world.Americans should wish the Turks well: no one should have to live under a military despotism. But then, if President Recep Tayyip Erdogan ends up looking a lot like President Vladimir Putin, only a bit taller and sporting a mustache, maybe a junta would be a better deal. And there’s not much the U.S. could do about it anyway.

Yet lots of Turks weren’t so sure. Some believed Washington orchestrated the mess. Indeed, a cabinet minister charged: “The U.S. is behind the coup.”

While there’s no evidence America was involved, the U.S. did participate in plenty of coups in the past. Anyway, even if not responsible, Washington, or at least a lot of the folks living there, had to be concerned about the coup since they desire to run the world.

After all, they view their role as a bit like that of God, who is concerned when the smallest sparrow falls to earth. More practically, they want to use the Turkish base at Incirlik to bomb and drone most of Ankara’s neighbors as well as more distant points. So the U.S. government must keep either Erdogan or the military – whoever happens to be in control of Incirlik at any given moment – happy.

Keeping other governments happy appears to be a full-time job for the State Department. Last year, the Obama administration suggested a major policy change when it negotiated the Iran deal – by no means a perfect accord, but certainly better than sending in the bombers, as many neocon politicians seemingly desired. However, despite coming up with a strategy to dissuade Iran from building nuclear weapons and enable the country to reenter the international economy, providing better opportunities to the large and generally pro-Western youth population, the administration felt it had to “reassure” such U.S. allies as Saudi Arabia.

People in Washington apparently missed the memo: Saudi Arabia is a totalitarian dictatorship, only based on religion rather than ideology. Iran limits human rights. Saudi Arabia eliminates them, at least when it comes to opposing the royal system of princely looting and believing anything other than Sunni Islam. Yet successive U.S. presidents have proclaimed their eternal friendship with the Saudi royals.

Personal friendship would be one thing. But these are political relationships, which means Washington giving the king and court most anything they want.

After 9/11, Saudis were spirited out of the U.S. on special flights; the 9/11 commission report’s discussion of Saudi Arabia’s role was kept classified until last week. Riyadh gets to buy most any weapon it wants – as though that should be a benefit for Americans, since Saudi Arabia should be protecting itself from Iran, which spends but a fraction of Riyadh’s spending on its military.

Personal friendship would be one thing. These are political relationships.U.S. government officials who otherwise wander the globe denouncing failed elections, inadequate minority representation, lack of free speech, and a host of other infirmities, maintain a discreet silence when visiting Riyadh. From Washington’s standpoint, one obviously can be too free!

Worst of all, the U.S. agreed to underwrite the Saudis’ war against the Houthis in Yemen. Don’t ask what the conflict is about. The Houthis have been in revolt for decades and recently completed a dramatic switcheroo, joining with former president Ali Abdullah Saleh, an American ally against whom they fought for years.

The Saudis decided they wanted to reinstate his successor (the “legitimate” president, at least, as legitimate as you can be in Yemeni politics) who had been ousted by the Houthi-Saleh coalition. So royals intervened, killing abundant numbers of civilians, while blaming everything on Iran. Naturally, Washington is on Saudi Arabia’s side, seemingly attracted to war a bit like moths head toward the light. But why should the U.S. kill Houthis who have never done anything against the American people?

If there’s one issue that should be easy for American officials, it is not meddling in the business of organizations to which the U.S. does not belong. But no. The president and his aides apparently are convinced that the world would come to a quick and particularly gruesome end if they did not seek to micro-manage even groups which neither they nor their country had been invited to join.

Back when Turkey’s President Erdogan was a liberal hero, U.S. president Barack Obama went to Ankara and gave a speech advocating Turkey’s membership in the European Union. One could imagine the reaction of Americans if, say, the French president showed up in Mexico City and lectured on why the U.S. should create a North American Union and grant Mexico equal rights to govern the continent.

But President Obama is nothing if not consistent. Earlier this year, he went to London and told the British that they should not vote to leave the European Union. (They did so anyway.) One is tempted to ask why the president didn’t stay home to work on America’s problems. However, his prior efforts actually caused many of today’s difficulties. So no sensible American should want him to try to fix much of anything. And no sensible Briton would want to listen to him tell them what to do.

Of course, a lot of foreign peoples wouldn’t complain if U.S. officials only offered advice. Far too many people in other lands have come to realize that being a superpower means never having to say one is sorry for bombing, invading, and occupying foreign countries and imprisoning, torturing, and killing foreign peoples.

The U.S. government must stop those seeking to kill Americans. It also must stop making so many enemies who will then seek to kill Americans.Yes, yes, we live in a dangerous world, as we are constantly told, and some people mean us ill. However, the world isn’t very dangerous for a nation surrounded on two sides by big oceans and two other sides by friendly neighbors (at least until Donald Trump thoroughly alienates the latter). The traditional big threats that most countries had (and some still have) to worry about, such as invasion, just don’t apply to America.

Moreover, many of the people who hate us do so because of things we do – like bomb, invade, occupy, imprison, torture, and kill. That doesn’t justify terrorist attacks, but the American people need to know that blowback is real, that what is done in their name can come back to hurt them. The U.S. government must stop those seeking to kill Americans. It also must stop making so many enemies who will then seek to kill Americans. The best way to do that is for the government to do less militarily in the world.

But the American people should do more. They are the best ambassadors for the U.S. They establish friendships, demonstrate kindness, become customers, teach students, spread ideas, and build human bridges in so many other ways. Such human connections are not enough to prevent conflict and war. However, transforming other nations in this way is the one thing that most every American can do. It’s certainly better than Washington bombing, invading, occupying, imprisoning, torturing, and killing again.