Beginning in the early 1990s, global capitalism has lapsed into “its most savage form,” according to progressive populist (and new papal advisor) Naomi Klein.

Just kidding, that’s not what happened at all.

New research from the Peterson Institute for International Economics finds that global median income doubled between 2003 and 2013. Over the same period, global income inequality declined.

Renowned economist Xavier Sala-i-Martin finds that absolute poverty rates have fallen around 80% and “measures of global welfare [have] increased by somewhere between 128% and 145%” since 1970.

Economists David Dollar and Aart Kraay found that, in a global sample of over 100 countries, changes in the income growth of the bottom 40% of the world’s income earners are highly correlated with economic growth rates. On the other hand, changes in inequality have contributed relatively little to changes in social welfare of the poor. 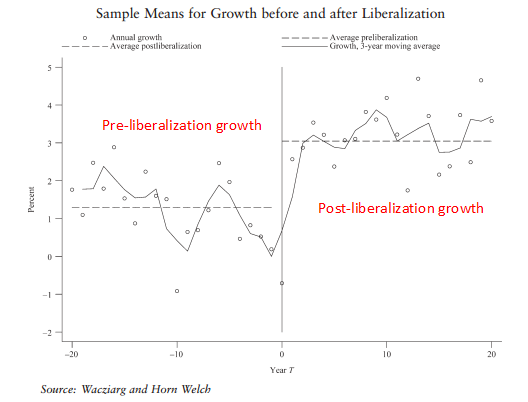 Using quantitative analysis and a thorough review of country-specific case studies of free trade reforms, Wacziarg and Welch found that after countries reformed their trade policies in favor of freer trade, average investment and economic growth surged quite dramatically.

Indeed, “countries that liberalized their trade regimes experienced average annual growth rates that were about 1.5 percentage points higher than before liberalization.”

While protectionists argue that policies restricting trade are necessary to reduce poverty by protecting domestic industries, empirical evidence favoring this assertion is scarce. A 2004 review of the evidence on trade liberalization (reform towards freer trade) by Alan Winters found that:

In the long run and on average, trade liberalization is likely to be strongly poverty alleviating, and there is no convincing evidence that it will generally increase overall poverty or vulnerability.

In 2014, a decade later, Winters published another review to see if new evidence had changed that conclusion. The finding? “The conclusion that liberalization generally boosts income and thus reduces poverty has not changed.”

Consider a study on trade liberalization in Indonesia, which found that liberalization in the form of reductions of import tariffs led to an increase in disposable income among poor households, which allowed them to pull their children out of the labor force, ultimately leading to “a strong decline” in the incidence of child labor.

Foreign investment is also more desirable than opponents of markets and globalization give it credit for. The conventional wisdom in wealthy countries is that multinational corporations exploit poor workers in developing countries for cheap labor, profiting off people working in sweatshop conditions.

However, a review of the evidence published by the National Bureau of Economic Research disputes this idea. According to authors Brown, Deardorff, and Stern:

There is virtually no careful and systematic evidence demonstrating that, as a generality, multinational firms adversely affect their workers, provide incentives to worsen working conditions, pay lower wages than in alternative employment, or repress worker rights.

In fact, there is a very large body of empirical evidence indicating that the opposite is the case. Foreign ownership raises wages both by raising labor productivity and by expanding the scale of production and, in the process, improves the conditions of work.

Opponents of globalization, like Klein, often try to shame consumers for purchasing apparel that was made in third world countries. Buying these clothes will just further perpetuate the exploitation of the poor in these countries, we are told.

However, in poor countries like Bangladesh, China, and Vietnam, the apparel industry consistently pays more than most other industries. According to research by economist Ben Powell, in poor countries “most sweatshop jobs provide an above average standard of living for their workers.” In light of this, it would hardly seem wise (or compassionate) to protest these jobs or boycott their products.

It’s also worth noting that foreign competition is another way that people in developing countries can be made better off, by, for instance, inducing lower prices in important consumer goods and expanding consumer’s choices. A recent paper by a team of economists from several universities found that in Mexico “foreign retail entry [into domestic markets] cause large and significant welfare gains for the average household.”

Anti-capitalists must also ask themselves: If these nightmarish depictions of free markets and globalization were true, why is capitalism so popular?

A recent Pew Research poll of 44 countries revealed that a global median of 66% of respondents say most people are better off under capitalism, even if some people are rich and some are poor.

Studies also show that there is an empirical regularity that democracies are more likely to engage in free market reforms than non-democracies. In recent work, Harvard and MIT economists found that one of the ways democracy indirectly stimulates economic growth is by increasing the likelihood of pro-market economic reforms.

Moreover, another Pew Research poll found that in 41 of the 46 countries surveyed, majorities or pluralities said they believed foreign companies are having a positive effect on their country. In fact, people in poorer nations are more likely to say that foreign investment is good than people in richer nations.

While wealthy progressives depict free markets, trade, and foreign investment as inherently exploitative, the world’s poorest people see them as opportunities for a better future.

In this era of “savage capitalism,” the world has seen unprecedented declines in poverty and increases in global welfare, especially in the countries that have embraced free markets and free trade.