In Berlin, Germans Consider a Land Expropriation Law That Echoes Their Communist Past

In Berlin, support is growing for a referendum on mass property expropriation. 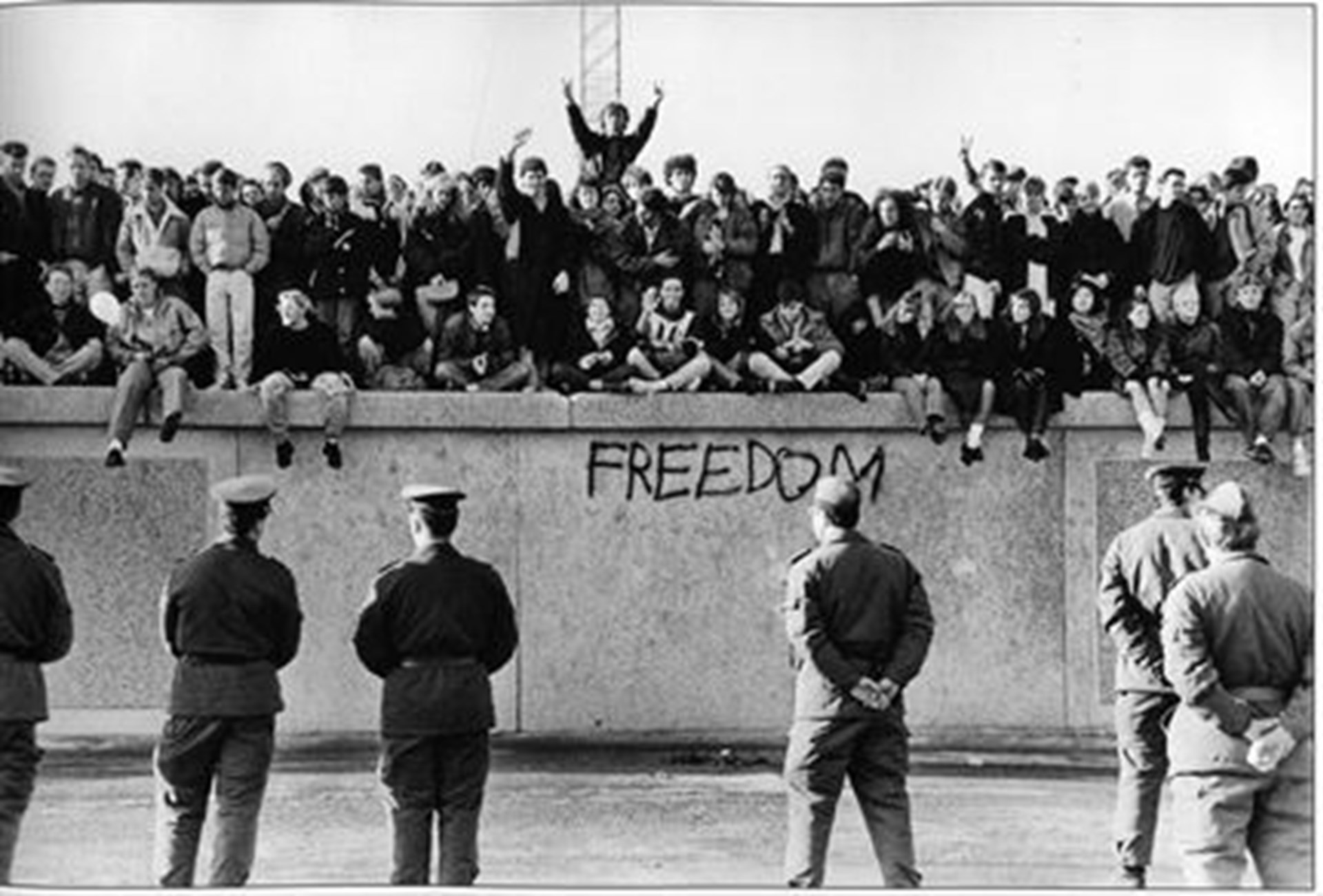 In Berlin, support is growing for a referendum on mass property expropriation. In a move reminiscent of East Germany’s communist past, the referendum’s supporters aim to seize property from all private landlords who own more than 3,000 rental units.

If the housing activists are successful and expropriation is enacted, roughly a dozen housing companies owning around 240,000 apartments would be affected. The largest of these private landlords is the publicly traded real estate company, Deutsche Wohnen, which owns over 110,000 rental units in Berlin.

The campaigners believe that the referendum’s radical demand is supported by Germany’s 1949 constitution, the Basic Law, which specifies that “land, natural resources and means of production” may be transferred to “public ownership,” i.e. nationalized. However, this is the first time the law has actually been applied in practice.

It’s yet another example of how politicians in the West are forgetting the lessons of the socialist failures of the 20th century, a trend I document in my new book, The Power of Capitalism.

According to the Berlin Senate’s own estimate, expropriating property owners would require compensation payments of up to €36 billion. However, the campaigners behind the referendum want to pay far less. They commissioned their own experts, who concluded that in the event of expropriation, there would be no need to pay the current market value of the property in compensation. They claim that a far lower price would suffice: some of the campaign’s leading figures have claimed that a symbolic sum of €1 would be enough.

Others have said they are ready to pay more, but even these offers are well below market value and would not even be enough for the real estate companies to settle their bank liabilities. In effect, the proposals amount to nothing less than expropriation without compensation. But even if the petition for a referendum is successful, it doesn’t necessarily follow that landlords will be expropriated.

With its roots in communist East Germany’s ruling party, the SED, it is hardly surprising that the Left Party supports the expropriation campaign.

In a previous referendum, for example, the population of Berlin voted to keep Tegel Airport open even after the (repeatedly postponed) opening of the new BER International Airport, but Berlin’s government simply ignored the result of the referendum and refused to implement it in a law.

Berlin is governed by three parties: the SPD (comparable with the British Labour Party), the left-wing environmentalist party, Die Grünen (the Greens) and the former communist party, Die Linke (the Left Party). With its roots in communist East Germany’s ruling party, the SED, it is hardly surprising that the Left Party supports the expropriation campaign.

People’s experience of state-owned housing in the communist GDR couldn’t have been much worse. Despite the fact that East Germany’s government had made housing construction one of its priorities, the difference between East Germany’s planned economy and West Germany’s market economy was nowhere more visible than in the housing market. In East Germany, rents were controlled at extremely affordable levels, but East Germans still had to wait years for a highly-coveted apartment in one of the country’s new, prefabricated, concrete multi-family apartment buildings.

Pre-war multi-family buildings in Leipzig, Dresden, East Berlin, Erfurt, and other East German cities were so dilapidated that a massive, tax-funded refurbishment scheme (costing several billion euros) was required to bring them up to scratch in the years after German reunification. By then, the post-war era’s pre-fabricated apartment buildings also required large-scale renovation. Holm has previously pointed to Venezuela’s housing policy as an example Germany should follow. In addition, an extensive construction program was also required to solve the severe housing shortage in Germany’s eastern regions. With the help of tax incentives, a total of 838,638 homes were completed in the former GDR during the 1990s, at a cost of €84 billion.

Senator Katrin Lompscher, who is responsible for housing construction in Berlin, is a member of the Left party who treats investors with open hostility. After taking office, she appointed Andrej Holm, a former member of the East German State Security Service (Stasi), as her secretary of state. Holm has previously pointed to Venezuela’s housing policy as an example Germany should follow. Having failed to disclose the work he did for the Stasi, he was forced to resign, although he still serves as a Senate advisor.

The Young Socialists Target Landlords with over 20 Apartments

Far from being the preserve of the hard left, the expropriation demands have met with broad political support. Robert Habeck, chairman of the Green Party, said in a newspaper interview on April 7 that if necessary, housing companies would have to be expropriated. According to the latest opinion polls, his party is currently the second strongest in Germany and by far the strongest in Berlin.

The governing mayor of Berlin, the SPD’s Michael Müller, has distanced himself from the expropriation campaign, although even he has not ruled out using such a measure “as a last resort.” For Müller, the costs of expropriation are simply too high. Instead, the SPD is focusing its efforts on a rent freeze. If they get their way, rents in the German capital will be frozen for at least five years. Müller has also announced that he wants to “buy” housing stock from the city’s private housing companies.

According to the referendum campaigners, these include the very same units that would be expropriated if the referendum ends up being successful. It would seem that Berlin’s government is pursuing a twin-track strategy: the extremists on the left are demanding expropriation, while the center-left SPD wants to harass and ramp up the pressure on property owners until they “voluntarily” sell their apartments below market value.

The heated discussions surrounding the expropriation of apartment owners is symptomatic of the renaissance of socialist ideas in Germany.

But the SPD is also home to more radical demands: One of the party’s youth branches, the Jusos in Berlin-Pankow, has gone further than the demands of the referendum campaign and proposed expropriating any landlord with more than 20 apartments. The national chairman of the SPD’s youth organization, Kevin Kühnert, defended this demand on a high-profile television talk show. In all seriousness, he asked: “What right does anyone have to own more than 20 apartments?”

The heated discussions surrounding the expropriation of apartment owners is symptomatic of the renaissance of socialist ideas in Germany. Just a few years ago, the government adopted the so-called “rent brake.” Germany’s new rent control law represented a significant intrusion by the state into the contractual freedom between tenants and landlords. The law stopped landlords from charging new tenants rents that are more than 10 percent above a “local comparative rent.”

The only apartments that were exempted from the rent brake were newly built apartments. In the years since it was enacted, however, the rent brake has proven overwhelmingly ineffective and has since been made even more stringent.

The mood in Berlin is explosive: The housing companies’ prominent directors are accompanied by bodyguards wherever they go because of threats of violence from members of the left-wing extremist scene. Cars—including vehicles from the Deutsche Wohnen fleet—have been set on fire several times in recent weeks by left-wing extremists.

The Real Causes of the Housing Shortage

Unfortunately, the real estate industry has also fallen short: It has been unable to effectively explain to Berlin’s population that the real culprits behind the city’s spiraling rents are government politicians. The only reason rents are rising is because nowhere near enough affordable apartments are being built.

And there are two main reasons for this: First, construction permit procedures take far too long—it can take ten years for a developer to progress from purchasing a plot of building land to actually completing an apartment. Construction itself takes two years. Developers spend the other eight years dealing with the authorities and negotiating with local politicians. Second, politicians have made building more and more expensive over the last few years, especially with a raft of environmental regulations and never-ending updates to Germany’s “Energy-saving Ordinances.”

As the population of Berlin continues to grow, it is only logical that rents and prices are going up: simply put, demand far outstrips supply.

Perhaps more than anywhere else in Germany, Berlin provides countless examples of how left-wing politicians are blocking the construction of new housing. Since Lompscher from The Left party took up office as Berlin’s senator for construction, the number of development plans being approved has halved!

And, as anyone with a basic understanding of the housing industry will know, the construction of new apartments largely depends on the number of development plans being approved. What’s more, the number of building permits being issued in Berlin is also in steep decline.

As the population of Berlin continues to grow, it is only logical that rents and prices are going up: simply put, demand far outstrips supply. The only way to ease the city’s housing crisis is to massively increase the volume of affordable apartments under construction. It is clear what the city needs. And yet so much energy is being wasted on an expropriation campaign that, whether it is successful or not, will not create a single new home. All it will accomplish is driving investors out of the city.

This article is reprinted with permission from Cap X.

Dr. Rainer Zitelmann is a historian and sociologist. He is also a world-renowned author, successful businessman and real estate investor. His most recent book, The Power of Capitalism, was released in 2019.