In 2017, the USA Had the Largest Decline in CO2 Emissions in the World for the 9th Time This Century 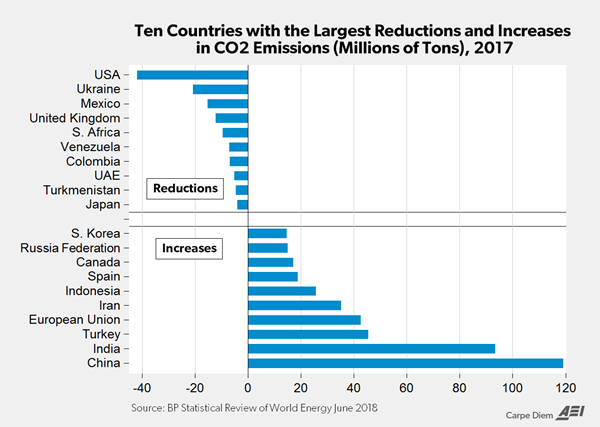 From the June 2018 BP Statistical Review of Global Energy (67th edition) here are some details on C02 emissions in 2017:

2. Declines in CO2 emissions in 2017 were led by the US (-0.5% and 42 million tons, see chart above). This is the ninth time in this century that the US has had the largest decline in emissions in the world. This also was the third consecutive year that emissions in the US declined, though the fall was the smallest over the last three years.

3. Carbon emissions from energy use from the US are the lowest since 1992, the year that the United Nations Framework Convention on Climate Change (UNFCCC) came into existence. The next largest decline was in Ukraine (-10.1% and 28.1 tons).

For that impressive “greening” of America, we can thank the underground oceans of America’s natural gas that are now accessible because of the revolutionary, advanced drilling and extraction technologies of hydraulic fracturing and horizontal/directional drilling, and are increasingly displacing coal for the nation’s electricity generation.