If You Accept this Raise, You Fall Off the Welfare Cliff

Pretend you are a poor, single parent of two in Chicago, earning $12 an hour, working full time, and determined to do what is best for your family. And suppose your employer, impressed with your work, offers you training for and promotion to a new job paying $15. Should you take the offer?

At your present $12 an hour you are eligible for refundable tax credits, food assistance, housing assistance, child care assistance, and medical assistance worth $41,465 combined. Together with your earned income after taxes of $22,121, you are now bringing home to your kids about $63,586 a year.

If you take your employer’s offer, you’ll earn $5,451 more after taxes, $27,572. You will also become eligible for an Affordable Care Act (ACA) premium tax credit. But at that level of earned income all your other benefits would decrease by $8,336, more than your increase in net pay. That means the income you would bring home would decrease from $63,586 to $60,701.

It’s tragic because one of the keys to human happiness is earned self-respect, which requires, as Charles Murray has written, making one’s own way in the world.

Now, would you take your employer’s offer? What would be best for you and your family, a move up the job ladder with a loss of $2885 in income? Or staying in your same job and keeping the larger income?

This example, which is taken from a fascinating, and appalling study by the Illinois Policy Institute entitled “Modeling Potential Income and Welfare Assistance Benefits in Illinois,” illustrates with clear charts and tables what is known as “welfare cliffs” or the “low wage trap,” which can trap families in poverty. When earning more means taking home less, the disincentive to work is obvious. The report provides striking visual representations of the “welfare cliffs” that poor people’s total incomes can fall off as they increase their earned incomes. Here is the chart on which the hypothetical above is based (the particular numbers in our example come from tables in the report, which clarify the visual data in the charts.) 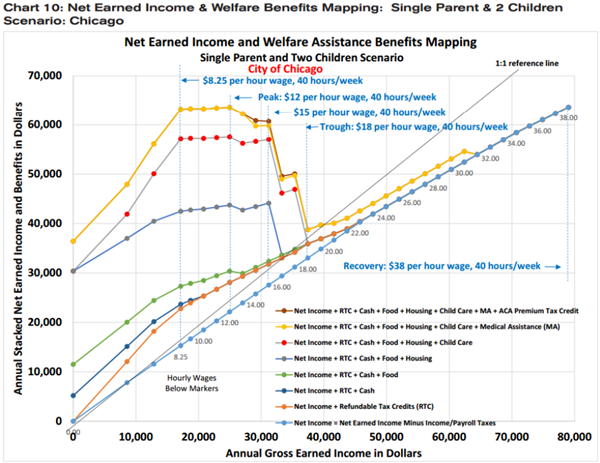 To pick up our thought experiment, let’s suppose that you want to get free of welfare eventually, and you know that moving up the job ladder is key to doing so, so you take your employer’s offer of a raise to $15 an hour and the corresponding loss of $2,885 in annual income. You cut back on spending where you can and look to the future. Now suppose further that you do well in your new job, you boost your knowledge and skills, and your employer offers you another promotion, with still more training and a raise to $18 an hour. Should you take it? Can you afford to take it?

Dreadful government schools in poor areas and systematic obstacles to getting a job, such as minimum wage laws and occupational licensing laws, are also to blame.

At $18 an hour full time you would earn gross income of $37,440, and net income (after taxes) of $33,023. But earned income that high would reduce your refundable tax credit and ACA premium assistance, and eliminate your cash assistance, food assistance, housing assistance, and child care assistance, for a total reduction in government benefits of $26,820. So if you take the promotion and raise, your income would decrease from $60,701 to $39,332! A case could be made that it is irresponsible for you to reduce your family’s income that way.

Just think what that kind of welfare cliff does to the incentive to work (“on the books,” at least) and thereby to get off welfare. And the problem is not restricted to Chicago; the same kind of problem exists all across the country.

One of the tragedies of America today is that so many adults of sound mind and body do not support themselves and their families. It’s a tragedy not because they suffer material want; indeed, relatively few suffer so, because government assistance satisfies many of their material needs. It’s tragic because one of the keys to human happiness is earned self-respect, which requires, as Charles Murray has written, making one’s own way in the world. The vast majority of poor people don’t want welfare; they don’t want handouts; they want a good job with which they can support themselves and their families comfortably. The tragedy of the American welfare system is that it traps so many people in dependency on government, by hindering them from getting on and climbing up the job ladder, and thereby earning self-respect and happiness.

Welfare cliffs are of course not the only reason so many capable Americans languish in partial dependency on government assistance. Dreadful government schools in poor areas and systematic obstacles to getting a job, such as minimum wage laws and occupational licensing laws, are also to blame. But the perverse incentives of America’s welfare system really hurt.

A version of this piece was published by LearnLiberty.