How to Create Starvation in 2016

A path does exist. It goes by the name “socialism.” 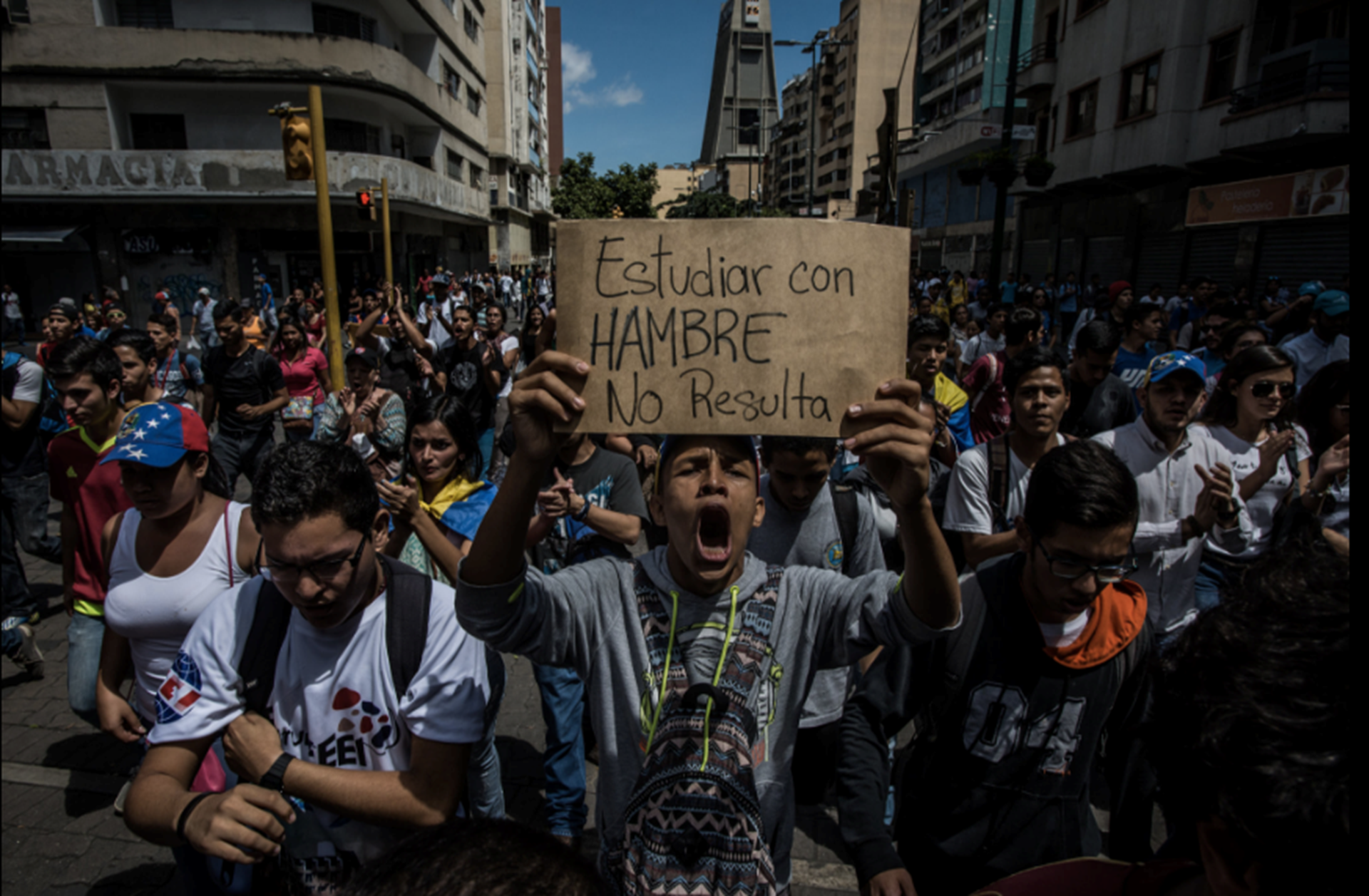 Look around Venezuela and what you see is the end of everything we call civilization.One of the great achievements of the human mind is having produced a solution to the single greatest challenge of life on earth: getting enough to eat. Shelter and clothing are no brainers by comparison. You find a cave, you snag a pelt, and you are good to go.

But finding food to eat is a daily issue for human beings, never finally solved. You need more than a stock of food; you need a system that produces a continual flow.

In 2016, we finally have such a system in place, one capable of supporting 7.4 billion people. It’s so robust at this point that the developed world has the opposite problem of obesity, which, in the course of social evolution, is a nice problem to have.

The creation of this system – which you can see on display at any grocery store in your own neighborhood – defied the expectations of legions of doubters in the 19th century. Population was booming beyond belief. How would they be fed? Most intellectuals couldn’t imagine how it could happen.

And yet it did. So complex, well developed, and productive is the global market for food that it turns out to be extremely hard to break the system. To create starvation in 2016 requires extraordinary effort. It requires a comprehensive system of coercion that attacks all the institutions that make abundance possible: ownership, international trade, an adaptive price system, the right of commercial innovation.

Such a system does exist, however. It goes by the name “socialism.” It is being tried today in a country that was once wealthy, comfortable, and civilized: a country with the largest oil reserves in the world.

Yes, it seems like fiction. It’s not. In one country in particular, over the course of 16 years of unrelenting destruction of property rights and human rights, step by gruesome step, socialism has resulted in unthinkable scenes of human suffering.

That country is Venezuela. It began under the rule of Hugo Chavez and now continues under the rule of his successor Nicolás Maduro. As bad, grafting, and despotic as their intentions, it is not likely the case that they intended to create starvation. Rather, they sought to bring about all the promises of socialism: fairness, equality, an end to exploitation, justice, and so on. But you look around and what you see instead is the end of everything we call civilization.

I can do no better than to quote at length from the New York Times report from yesterday:

Venezuela is convulsing from hunger.

Hundreds of people here in the city of Cumaná, home to one of the region’s independence heroes, marched on a supermarket in recent days, screaming for food. They forced open a large metal gate and poured inside. They snatched water, flour, cornmeal, salt, sugar, potatoes, anything they could find, leaving behind only broken freezers and overturned shelves.

And they showed that even in a country with the largest oil reserves in the world, it is possible for people to riot because there is not enough food.

In the last two weeks alone, more than 50 food riots, protests and mass looting have erupted around the country. Scores of businesses have been stripped bare or destroyed. At least five people have been killed….

The economic collapse of recent years has left it unable to produce enough food on its own or import what it needs from abroad. Cities have been militarized under an emergency decree from President Nicolás Maduro, the man Mr. Chávez picked to carry on with his revolution before he died three years ago.

“If there is no food, there will be more riots,” said Raibelis Henriquez, 19, who waited all day for bread in Cumaná, where at least 22 businesses were attacked in a single day last week.

But while the riots and clashes punctuate the country with alarm, it is the hunger that remains the constant source of unease.

A staggering 87 percent of Venezuelans say they do not have money to buy enough food, the most recent assessment of living standards by Simón Bolívar University found.

About 72 percent of monthly wages are being spent just to buy food, according to the Center for Documentation and Social Analysis, a research group associated with the Venezuelan Teachers Federation.

In April, it found that a family would need the equivalent of 16 minimum-wage salaries to properly feed itself.

Ask people in this city when they last ate a meal, and many will respond that it was not today.

Among them are Leidy Cordova, 37, and her five children — Abran, Deliannys, Eliannys, Milianny and Javier Luis — ages 1 to 11. On Thursday evening, the entire family had not eaten since lunchtime the day before, when Ms. Cordova made a soup by boiling chicken skin and fat that she had found for a cheap price at the butcher.

“My kids tell me they’re hungry,” Ms. Cordova said as her family looked on. “And all I can say to them is to grin and bear it.”

Other families have to choose who eats. Lucila Fonseca, 69, has lymphatic cancer, and her 45-year-old daughter, Vanessa Furtado, has a brain tumor. Despite also being ill, Ms. Furtado gives up the little food she has on many days so her mother does not skip meals.

“I used to be very fat, but no longer,” the daughter said. “We are dying as we live.”

Her mother added, “We are now living on Maduro’s diet: no food, no nothing.”...

Sugar fields in the country’s agricultural center lie fallow for lack of fertilizers. Unused machinery rots in shuttered state-owned factories. Staples like corn and rice, once exported, now must be imported and arrive in amounts that do not meet the need.

In response, Mr. Maduro has tightened his grip over the food supply. Using emergency decrees he signed this year, the president put most food distribution in the hands of a group of citizen brigades loyal to leftists, a measure critics say is reminiscent of food rationing in Cuba.

“They’re saying, in other words, you get food if you’re my friend, if you’re my sympathizer,” said Roberto Briceño-León, the director of the Venezuelan Violence Observatory, a human rights group.

It was all a new reality for Gabriel Márquez, 24, who grew up in the boom years when Venezuela was rich and empty shelves were unimaginable. He stood in front of the destroyed supermarket where the mob had arrived at Cumaná, an endless expanse of smashed bottles, boxes and scattered shelves. A few people, including a policeman, were searching the wreckage for leftovers to take.

“During Carnival, we used to throw eggs at each other just to have some fun,” he said. “Now an egg is like gold.”...

At the same time, the government also blames an “economic war” for the shortages. It accuses wealthy business owners of hoarding food and charging exorbitant prices, creating artificial shortages to profit from the country’s misery.

It has left shop owners feeling under siege, particularly those who do not have Spanish names.

“Look how we are working today,” said Maria Basmagi, whose family immigrated from Syria a generation ago, pointing to the metal grate pulled over the window of her shoe store.

Her shop was on the commercial boulevard in Barcelona, another coastal town racked by unrest last week. At 11 a.m. the day before, someone screamed that there was an attack on a government-run kitchen nearby. Every shop on Ms. Basmagi’s street closed down in fear.

Other shops stay open, like the bakery in Cumaná where a line of 100 people snaked around a corner. Each person was allowed to buy about a pound of bread.

Robert Astudillo, a 23-year-old father of two, was not sure there would be any left once his turn came. He said he still had corn flour to make arepas, a Venezuelan staple, for his children. They had not eaten meat in months.

“We make the arepas small,” he said.

In the refrigerator of Araselis Rodriguez and Nestor Daniel Reina, the parents of four small children, there was not even corn flour — just a few limes and some bottles of water.

The family had eaten bread for breakfast and soup for lunch made from fish that Mr. Reina had managed to catch. The family had nothing for dinner.

It has not always been clear what provokes the riots. Is it hunger alone? Or is it some larger anger that has built up in a country that has crumbled?

Inés Rodríguez was not sure. She remembered calling out to the crowd of people who had come to sack her restaurant on Tuesday night, offering them all the chicken and rice the restaurant had if they would only leave the furniture and cash register behind. They balked at the offer and simply pushed her aside, Ms. Rodríguez said.

“It is the meeting of hunger and crime now,” she said.

As she spoke, three trucks with armed patrols drove by, each emblazoned with photos of Mr. Chávez and Mr. Maduro.

The trucks were carrying food.

“Finally they come here,” Ms. Rodríguez said. “And look what it took to get them. It took this riot to get us something to eat.”

Sometimes people wonder why people like me are so passionate about free markets and all that they imply. In the end, it is about the quality of life on earth. Will we thrive or will we starve? This is what economics is about. And it is not an abstract problem.

Any country on earth is capable of creating starvation. You only need to follow the path of Venezuela. Attack property rights and trade, pillage the rich, abolish the price system, jail dissenters, crush the opposition, dismantle the system of natural liberty that has fed the world. This is socialism. It is the path to Hell on earth.