How Free Migration Could Double the Economy

The single best policy we could do for the poor, the economy, and the world

Great libertarian thinkers such as Milton Friedman and Ludwig von Mises believed that the free movement of people (labor) across borders is desirable in the same way that the free trade of goods and capital is desirable.

Both labor and capital should not be hindered from relocating to areas in which they can be most productively used. As Mises wrote in his influential book Liberalism, “There cannot be the slightest doubt that migration barriers diminish the productivity of human labor.”

To illustrate this point, consider the differences in productivity between the United States and Mexico.

The United States is much more productive than Mexico and, consequently, has five times more income per person.

It's not just that the United States has better educated or more skilled workers, although it does. Rather, the capital, institutions, and infrastructure makes the same workers much more productive simply by being in a different place.

For this reason, many people come the United States in order to gain access to the human and physical capital that makes them more productive and consequently wealthier than they could be in their home country.

In a world in which labor were free to across borders, you would expect a larger share of the global population residing and working in high productivity countries, thus dramatically increasing global income and production.

Many academics have attempted to model how global income would respond in a world of free labor mobility.

In summary of the literature, economist Michael Clemens found that the research indicates that ending government restrictions on the movement of labor would result in global income increasing on the order of 100%! That is, the total amount of goods and services produced on planet earth every year would double. 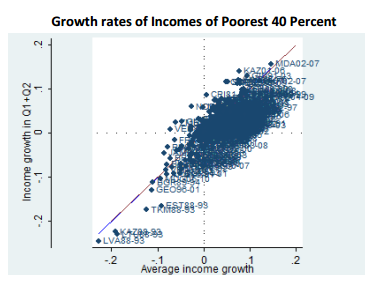 It’s widely known that economic growth reduces poverty. This chart was produced by economists David Dollar and Aart Kraay, who depict the relationship between economic growth and income growth of the poorest 40% of people in a global sample of over 100 countries.

It’s strikingly clear from this data that economic growth is key to global poverty reduction. And if the estimates of the benefits of open borders are anything like accurate, lifting international barriers to free migration is one of the most effective anti-poverty measures imaginable.

Conversely, they suggest that governments across the globe are perpetuating poverty by restricting the movement of people in and out of countries. Unfortunately, the liberalization of immigration policies isn’t popular. According to Pew Research:

Publics around the world want tighter restrictions on immigration to their countries.

Majorities in 22 of 25 nations completely or mostly agree with the statement: “We should restrict and control entry of people into our country more than we do now.”

While there are some non-economic reasons why people might support more restrictions on immigration, the belief that immigrants hurt the economic well-being of natives certainly plays a role in promoting restrictionist policies.

Opponents of open immigration policies, much like trade protectionists, seek to shield native workers from foreign competition (in the form of immigration), arguing that it will drive down native wages and employment.

In the mind of the economic nationalist, an increase of the supply of labor necessarily increases competition for jobs, reducing the likelihood of natives finding employment and causing wages to fall.

However, this theory ignores that the number of “jobs” in the economy is not fixed, and it misses ways that immigrants expand native employment and contribute to economic prosperity.

One way immigrants expand domestic employment is through their own consumption: They buy houses, cars, groceries, etc. On the supply side, immigrants may create new employment opportunities by opening new businesses. In the United States, immigrants are 30% more likely to start a business than natives.

Empirically, there is little evidence that immigration makes economic life worse for natives.

According to economist Giovanni Peri, the data shows that immigrants tend to increase specialization in the economy, contributing to higher levels of productivity. That is, immigrants’ skills tend to complement those of native workers. As a result, real wages of natives tend to increase in response to immigration.

According to Peri and his co-author:

Across a wide range of settings and research approaches, immigration is associated with higher wages for most native-born workers, and with higher productivity, especially when analyzing immigration across geographic areas.

In regards to the effect of immigration on native employment, Harvard economists William and Sari Kerr find that “most studies find only minor displacement effects even after very large immigrant flows.”

Moreover, a new working paper by Hong and McLaren finds that, in the United States, “each immigrant creates 1.2 local jobs for local workers, most of them going to native workers.”

Despite the widely held belief that immigrants extensively use government benefits and are a drain on government budgets, economists find that, “on average, immigrants appear to have a minor positive net fiscal effect for host countries.”

Even in welfare states like Sweden, immigrants are a benefit to government budgets. A recent study found that the net fiscal effect of unrestricted Romanian and Bulgarian immigration to Sweden was “substantially positive.”

In the context of the United States, research finds that, historically, “immigrants and their descendants have not increased the size of individual welfare benefits or welfare budgets and are unlikely to do so going forward.”

Also, contrary to the belief that immigrants come to the United States to exploit the generosity of the American taxpayer, data from the Current Population Survey (CPS) shows that poor immigrants use public benefits at a lower rate than poor native-born citizens.

Immigrants also have higher labor force participation rates than natives do, suggesting that foreigners come to America to work, not collect welfare. 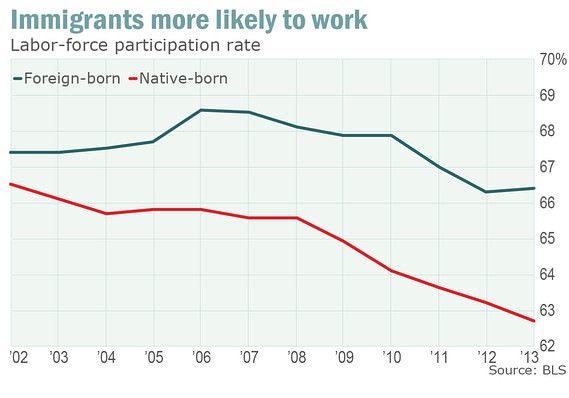 Isolationist immigration policies make no sense in light of the enormous economic benefits of free migration, and concerns about immigrants’ economic effect on natives have been shown to be overblown or flatly contradicted by the evidence

Moreover, it is ethically troubling that nativists emphasize the primacy of natives over foreigners in the first place, as if we weren’t all human and of equal worth. It undermines the notion of equal human rights to associate and cooperate. Closed borders ignore our duty to respect one another.