On the issue of trade, Donald Trump is wallowing in the swamp of special interest favoritism instead of defending the interests of taxpayers and consumers. 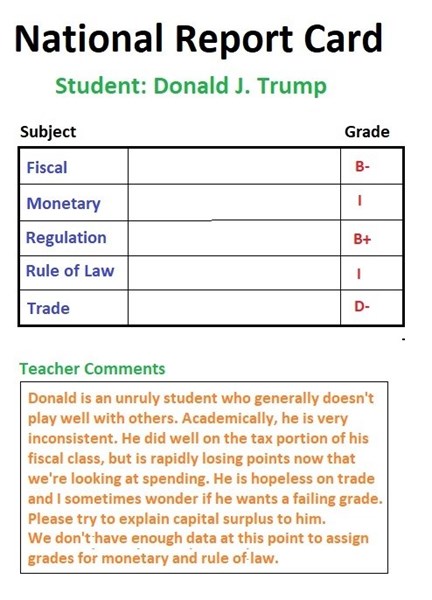 And it appears that he is determined to be wrong on automobiles.

The Administration has launched a “Section 232” case at the cronyist Commerce Department, which is the first step toward a big tax increase—which would be unilaterally imposed—on imported vehicles.

By the way, Section 232 is supposed to be limited to issues involving national security. And since American consumers don’t buy cars from countries that are enemies (or even potential enemies) of the United States, the entire case is a farce.

Yet the protectionists in the Administration get to act as judge and jury.

Unfortunately, when a sentence is imposed, it will fall on Americans. The trade experts at the Peterson Institute for International Economics have analyzed the issue and they are not impressed by Trump’s proposed protectionism.

A new PIIE analysis shows that…production in these industries would fall 1.5 percent and cause 195,000 US workers to lose their jobs over a 1- to 3-year period or possibly longer. …If other countries retaliate in-kind with tariffs on the same products, production would fall 4 percent, 624,000 US jobs would be lost… This second scenario would also hurt US exports of these products more than imports. …Both scenarios demonstrate how reliant the domestic industries are on imported parts, or intermediate inputs, that are not produced in the United States or that have no easy US-made substitute. Tariffs would raise the cost of these parts and domestic production, which makes products more expensive to consumers and lowers demand for them in the United States and abroad. … nearly 98 percent of the targeted car and truck imports by value would hit key US allies: the European Union, Canada, Japan, Mexico, and South Korea.

Here’s a table from the PIIE study (click to enlarge).

Unfortunately, the second line is the most relevant since other nations will respond with their own destructive trade taxes.

But let’s not rely on just one source. The Hill reported on some additional research about the potential job losses from higher taxes on auto imports.

President Trump‘s proposed tariffs on imported automobiles and parts would cost the U.S. economy 157,000 jobs, according to a report by the Trade Partnership, a trade policy consultancy. “We find that the tariffs would have a very small positive impact on high-skilled workers in the motor vehicle and parts sectors, but very large negative impacts on workers — both high- and lower-skilled — in other sectors of the economy,” the study says. …the tariff policy would boost jobs in the auto sector by 92,000, but then destroy 250,000 jobs in the rest of the economy, according to the study. The price of foreign vehicles would rise from $30,000 to $36,400, a 21 percent increase. All in all, the economy would lose 0.1 percent of its value. Those effects don’t take into account any potential retaliation by American trade partners for the tariffs.

The Tax Foundation looked at the impact of higher taxes on imported autos and discovered that they would wipe a big chunk of the recent tax cuts.

...increasing tariffs on automobile imports would reduce the gain in after-tax income for households in 2018 derived from the Tax Cuts and Jobs Act while making the tax code less progressive. In 2017, the United States imported nearly $293 billion worth of vehicles for consumption, while paying about $3.4 billion in duties on those imports. If we assume that import levels will remain the same…the new tariff would amount to a $73 billion tax increase. …Using the assumptions mentioned above, we estimate that the new tariffs on automobiles would reduce after-tax incomes for all taxpayers by 0.47 percent in 2018 while making the distribution of the tax burden less progressive. These tariffs would fall harder on those taxpayers in the bottom 80 percent, reducing their after-tax income by 0.49 percent.

Here’s a chart from the report showing—for various income groups—how the trade tax hikes are offsetting the reductions from last year’s tax reform. 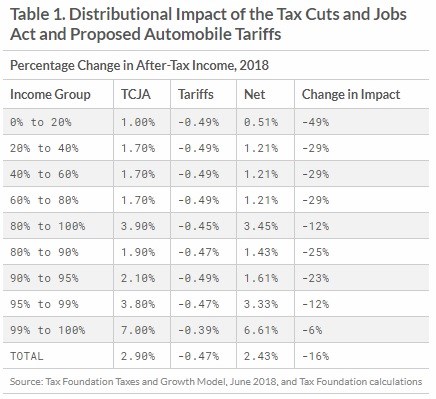 The Wall Street Journal opined on the economic harm to ordinary Americans.

The tariffs shave gains in all income brackets, but no one is hurt more than the poor and middle class. …Tariffs are inherently regressive because low-income Americans spend more of their income on household goods. Commerce Secretary Wilbur Ross has argued that no one will notice price increases—what’s a few cents more for a can of soup? But people in Mr. Ross’s income strata are not the Trump base. The Commerce Department is still looking at whether a muffler is a national security threat under Section 232 of the Trade Expansion Act of 1962. President Trump should abandon the idea lest Americans wonder if they really benefitted from that tax cut.

What about the White House’s claim that there should higher taxes on foreign cars because of national security?

Well, I rarely agree with Paul Krugman on fiscal policy, but there’s a good reason why he won a Nobel Prize for his work on international economics. His analysis on this topic is spot on.

…there have been only a handful of Section 232 investigations over the past half century—and most of them ended with a presidential determination that no action was warranted. But Trump is different. He has already imposed tariffs on steel and aluminum in the name of national security, and he is now threatening to do the same for autos. The idea that imported cars pose a national security threat is absurd. We’re not about to refight World War II, converting auto plants over to the production of Sherman tanks. And almost all the cars we import come from U.S. allies. Clearly, Trump’s invocation of national security is a pretext, a way to bypass the rules that are supposed to limit arbitrary executive action.

Showing this is a big tent, the Chamber of Commerce also concurs.

The U.S. Chamber strongly opposes the administration’s threat to impose tariffs on auto imports in the name of national security. If this proposal is carried out, it would deal a staggering blow to the very industry it purports to protect and would threaten to ignite a global trade war. In fact, the U.S. auto industry is prospering as never before. Production has doubled over the past decade, it exports more than any other industry, and it employs nearly 50 percent more Americans than it did in 2011. These tariffs risk overturning all of this progress. This isn’t about national security. The administration has already signaled its true objective is to leverage this tariff threat in trade negotiations with Mexico, Canada, Japan, the European Union, and South Korea. These allies provide nearly all U.S. auto imports and are among America’s closest partners. Neither they nor these imports endanger our national security in any way. The president’s Section 232 authorities should not be abused in this way, and doing so only encourages other nations to do likewise.

As does the Business Roundtable.

The Section 232 tariffs on steel and aluminum imports have harmed the U.S. economy, resulting in higher costs on U.S. businesses and consumers, and exposing U.S. exporters to foreign retaliation. Imposing such tariffs on automobile and automotive parts imports would only make things worse. Using ‘national security’ arguments under Section 232 to investigate and potentially impose tariffs on auto imports doubles down on a bad precedent for U.S. trade policy. It undermines our nation’s credibility in the global community, weakens the international trading system, and emboldens other countries to use ‘national security’ to limit U.S. goods and services exports to their markets.

Even the auto industry—including some American manufacturers—is opposed, as reported by ABC.

Two Washington D.C.-based automaker groups are slamming President Donald Trump’s decision to launch an investigation into auto imports, which could lead to tariffs on foreign-made vehicles. “To our knowledge, no one is asking for this protection. If these tariffs are imposed, consumers are going to take a big hit,” said John Bozella, President of Global Automakers, a trade group representing foreign manufacturers doing business in the U.S. …The legal mechanism for the investigation “has rarely been used and traditionally has not focused on finished products,” said Gloria Bergquist, spokeswoman for Auto Alliance, a group that represents foreign automakers like Volkswagen and BMW in addition to U.S. manufacturers like GM and Ford. “We are confident that vehicle imports do not pose a national security risk to the U.S.,” Bergquist said. …”Last year, 13 domestic and international automakers manufactured nearly 12 million vehicles in the U.S. The auto sector remains the leading exporter of manufactured goods in our country,” Bergquist said.

And the Financial Times notes that the rest of the world isn’t happy, either.

Donald Trump’s threat to impose tariffs on automotive imports in the name of national security has drawn condemnation from US trading partners around the world and warnings that it would disrupt global supply chains and put the international trading system at risk. …The European Commission…said it was “far-fetched” to invoke a national security consideration for car imports. That sets the stage for a possible challenge to any US tariffs at the World Trade Organization. …Japan also responded in unusually strong terms. “If they were to go ahead with such wide-ranging trade restrictions, it would throw the global market into confusion,” said Hiroshige Seko, minister of economy, trade and industry. “There could be a negative effect on the WTO multilateral trading system. It is extremely regrettable.”

In my humble opinion, “extremely regrettable” is the understatement of the century. As Walter Williams observed, protectionism is a punitive form of government intervention. Politicians and bureaucrats decide that their prejudices should take priority over consumer preferences. 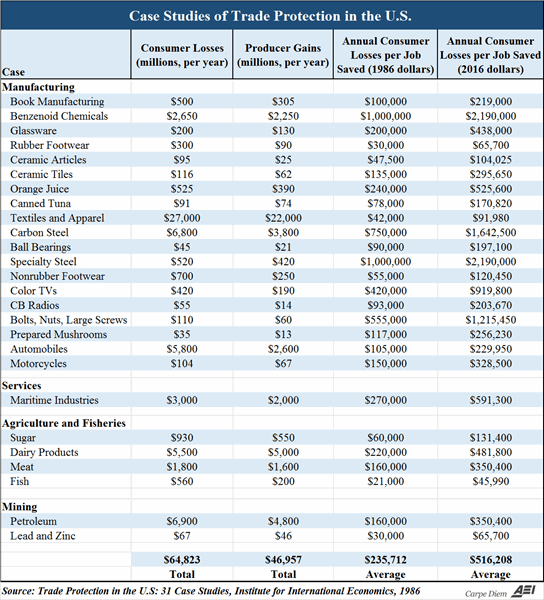 That’s morally offensive, but it’s also economically self-destructive since the research unambiguously demonstrates that protectionism is a net job destroyer.

I suspect Trump is part of the second group, but I’ll reserve judgment until I have the opportunity to ask him these eight questions.

P.S. Here’s a bit of trade history. The United States already imposes a 25 percent tax on imported light trucks. So why did American politicians decide to hurt American truck buyers with this tax? As explained in this video, it’s because European politicians decided to hurt their consumers with taxes on American chickens.

So if the Trump Administration moves forward with a big tax hike of foreign cars, video makers in the future will have new stories to tell about how reciprocal protectionism hurt various American industries, workers, and consumers. Maybe politicians will take the sugar program and extend that moronic approach to other sectors of the economy.

P.P.S. This is yet another reason why I miss Reagan.

P.P.P.S. Here’s the only acceptable argument for import taxes.