Legalizing marijuana is a great thing, but what's the point if outrageous taxes make the legal stuff unaffordable?

My view on the Drug War is somewhat schizophrenic. In my personal life, I’m basically a social conservative. I don’t like drugs, I’ve never tried drugs, and I urge others to behave the same way.

But I know that prohibition is a costly failure that leads to an abusive government (such as intrusive money-laundering laws and Orwellian asset-forfeiture laws).

And even if one doesn’t care about individual rights, the Drug War is an irrational misallocation of law enforcement resources.

So does this make me a libertarian on the issue? The answer is yes, of course, but I confess that legalization has a downside. And I’m not talking about more people wrecking their lives with drug abuse (indeed, evidence from Portugal suggests drug use may go down). 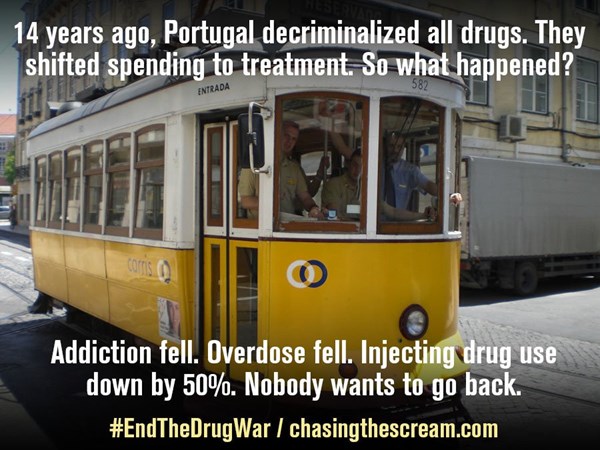 Instead, I don’t like the fact that politicians see legalization mostly as an opportunity to generate additional tax revenue.

My fears have materialized. Sort of.

According to a CNN report, politicians in California want to be the biggest profiteers from legal pot.

Between customers, retailers and growers, taxes on cannabis may reach as high as 45% in parts of the state, according to a Fitch Ratings report. …Consumers will pay a sales tax ranging from 22.25% to 24.25% which includes the state excise tax of 15%, and additional state and local sales taxes ranging from 7.25% to 9.25%. Local businesses will have to pay a tax ranging from 1% to 20% of gross receipts, or $1 to $50 per square foot of marijuana plants, according to the Fitch report. In addition, farmers will be taxed $9.25 per ounce for flower, and $2.75 per ounce for leaves. …Van Bustic, a specialist in the environmental impact of cannabis cultivation for Berkeley’s College of Natural Resources, said that registering with the state and becoming compliant will cost about $100,000.

Geesh, greedy governments can take the fun out of anything!

But not so fast. It seems that politicians are being so greedy that the geese with the golden eggs (or, in this case, drug-addled geese with golden buds) will stay in the shadow economy.

Not that we should be surprised. There is a wealth of evidence showing that high tax burdens lead to evasion and avoidance.

The Wall Street Journal looks at this issue and hits the nail on the head, editorializing that high tax rates on pot are a recipe for non-compliance.

…in California, where recreational pot was legalized last year, citizens now have a much clearer view of the unintended consequences that come from high tax rates. A new report from the global credit-rating firm Fitch Ratin highlights the effect of California’s high taxes on the marijuana market. The combined local and state rate on non-medical cannabis may be as high as 45% in some places, and Fitch says this acts as an incentive for Californians to shun legal pot dealers who pay the tax in favor of black-market sellers who don’t and can charge lower prices. …The irony is that one argument for legalizing pot has been to reduce illegal trafficking. But by imposing taxes that are too high on legal weed, politicians give pot heads an incentive to go back on the illegal market. This will come as no surprise to anyone who has followed the boon to illegal smokes from high cigarette taxes in places like New York City.

The CNN story cited above also addressed this issue.

Among the eight states where recreational marijuana is legal, only Washington has a higher tax rate at about 50%. Colorado and Nevada both follow with rates of 36%. Oregon has a tax rate of 20% and Alaska has a rate of up to 20%. …If taxes increase the price of cannabis beyond a certain point, the legal market becomes less competitive than the illicit market and then consumers become less likely to make the transition from the illicit market to the legal market,” said John Kagia, analyst for New Frontier Data, which tracks the cannabis industry. The Fitch report says this dynamic has already prompted Colorado, Washington and Oregon to lower their “initially uncompetitive” tax rates.

Indeed. I wrote about Colorado’s experience with pot taxation back in 2015.

A story in the Washington Post confirms that the buzzed version of supply-side economics is alive and well.

High taxes on legal marijuana in California could have the potential to turn many consumers away from the state’s cannabis shops and toward the black market, according to a repor from Fitch Ratings. …“The existing black market for cannabis may prove a formidable competitor to legal markets if new taxes lead to higher prices than available from illicit sources,” the report says. …These high tax rates have the potential to drive customers toward the black market. …Colorado, Oregon and Washington all reduced tax rates after the commencement of legalization to shift customers back toward the legal market.

That last sentence warms my heart. Isn’t it nice when politicians are forced to lower tax burdens even when they don’t want to?

P.S. Government is a buzz-kill in other ways. Deregulation helped unleash the craft beer industry, but also created a new source of tax revenue.

P.P.S. Since I’m a fiscal wonk, legalizing drugs has never been high (no pun intended) on my list of priorities. But when U.N. bureaucrats try to tell American states that they’re not allowed to end prohibition, I’m almost tempted to become a user.