Here Is the Proof that Foreigners Are Not Stealing American Jobs

Politicians who blame foreigners for the poor state of labor markets in the United States are profoundly misinformed.

Politicians who blame foreigners for the poor state of labor markets in the United States are profoundly misinformed.The idea that foreigners take jobs away from Americans is generally untrue. There is strong evidence specifically that the inflow of foreigners does not elevate domestic unemployment. Some politicians focus exclusively on the unemployment rate when arguing that Americans lose jobs to those who migrate to our domestic labor market.

Economists use the “Beveridge Curve” (named after Sir William Beveridge) to examine the relative availability of jobs. The Beveridge curve is simply a plot of job vacancy rates against unemployment rates. The official unemployment rate, or U-3 rate, counts active job-seekers as unemployed but omits people who have given up looking for work.

As one might expect, there tends to be high numbers of unfilled jobs during periods of low unemployment, and vice-versa. The logic behind the Beveridge Curve is simple: vacant jobs get filled more readily when there are many job-seekers, not when there are relatively few. Consequently, increases in job vacancies go with reductions in unemployment. 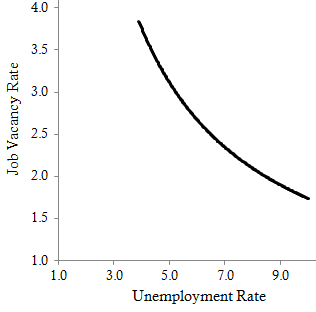 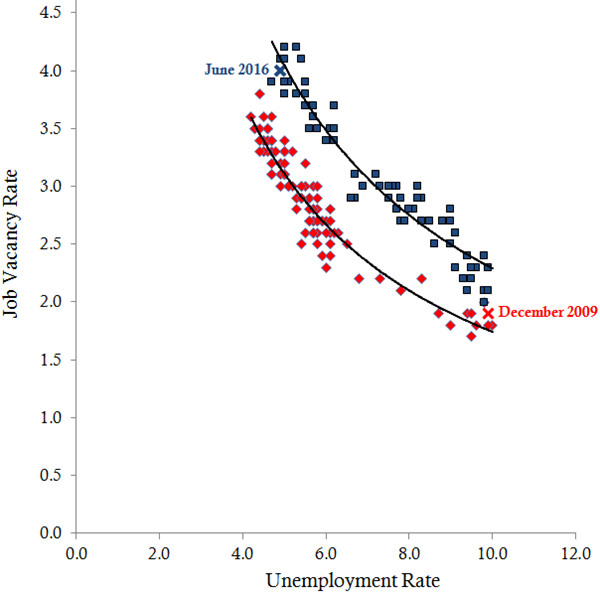 The exact causes of the post-subprime shift of the Beveridge curve are an important, but separate, issue. The primary issue here is with the allegation that foreigners take jobs from Americans. The implication of the shift in the Beveridge curve is obvious: the alleged competition between newcomers and natives over a few vacant jobs does not really exist.  Job vacancies have been running at high levels, relative to unemployment, for over six years. Hiring has been slow in the past six years, but job creation has been better. 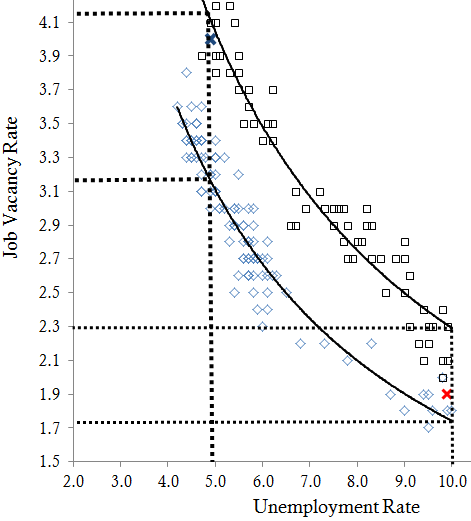 The relative rise of job vacancies is not due to the unemployment rate hitting rock bottom. The official U-3 unemployment rate has been lower than the rates seen for the summer of 2016, and there are large numbers of working age people who have exited the labor force anyway. While the number of Americans without work is relatively high, higher than suggested by the U-3 statistic, this fact is not due to migrants taking scarce jobs. The job vacancy rate shows that there are are many unfilled jobs, which could be filled by discouraged American workers and migrant workers both, even if we assume a fixed number of current vacant jobs.

The Why of Job Loss

The number of jobs is not fixed. Entrepreneurs hire as many workers as they find profitable. Profitability is simply a matter of people being willing to work, earn, and spend money on goods. There are significant problems in the current US economy. Employers do have ideas about hiring more employees, about producing more goods for profit. Many plans for potential hiring are not being undertaken. Lack of faster hiring in the midst of job vacancies is a sure sign that policies designed to counteract the subprime debacle have failed. Past failures are, of course, sunk costs, though we can learn from the past.

Politicians who blame foreigners for the poor state of labor markets in the United States are simply misinformed. Lack of hiring has left some people behind, but that is because open jobs are not being filled, not because migrants are taking a fixed number of available domestic jobs. Employers keep creating more jobs, depending upon the productivity and availability of labor.

Actual hiring has been slow relative to potential hiring in recent years due to other reasons. What are some possible causes of the hiring slowdown in recent years? Perhaps growing regulatory burdens and wasteful government spending and borrowing have caused employers to delay hiring plans. Perhaps the sheer complexity or uncertainty regarding regulations has caused hesitancy among employers. Perhaps government unemployment and disability benefits have left some people less anxious about finding work.

The current labor market conditions have led some Americans to give up looking for work. The solution to the hiring problem can only be found by identifying the actual causes of slow domestic hiring, not by falsely blaming migrants for a domestic situation of our own making.