Hating the Establishment Is Not the Same as Supporting Liberty

The case for antidisestablishmentarianism 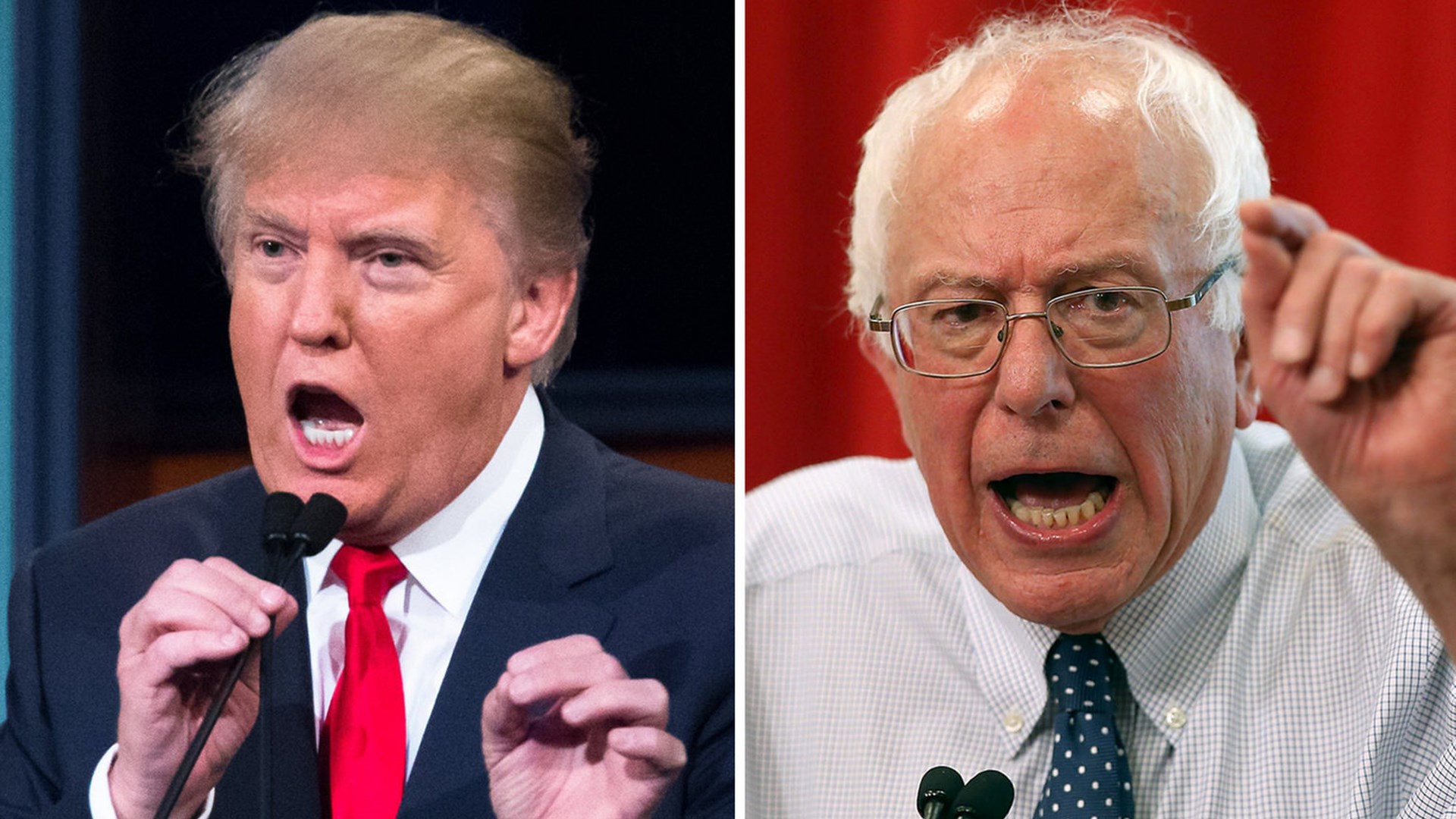 Many friends of mine — people who have worked for the progress of liberty for years — are mightily encouraged by the popularity of Donald Trump and Bernie Sanders. My friends point out that they are both radicals of a sort, people who represent a threat to the established political order. We too are against the establishment, so their rise suggests rising discontent with the status quo. That’s a step in the right direction, they say.

As far as it goes, I see the point, and I sympathize. In fact, on these pages, I’ve drawn parallels between the Tea Party and the Occupy movement: both oppose the status quo in ways partisans of liberty can appreciate.

But there’s a problem. The state power we oppose is not identical to the establishment we reject. You can overthrow the establishment and still be left with a gigantic machinery of legalized exploitation. All the agencies, laws, regulations, and powers are still in place. And now you have a problem: someone else is in charge of the state itself. You might call it a new establishment. It could be even more wicked than the one you swept away.

Indeed, it usually is. Maybe always.

Anatomy of the Establishment

What is an establishment? It is a network of large and cooperating interest groups that have developed a stable relationship with state power. It includes finance, organized labor, public bureaucrats, government contractors, big businesses with quid pro quo relationships with regulators and politicians, political families with a strong stake in the election process, intellectuals at state-friendly think tanks and universities, and so on.

Czarist Russia had a deeply entrenched establishment: the church, business, government, aristocracy all working together in a stable relationship. The corruption was obvious. Then it became intolerable with the war draft and rampant inflation. The establishment failed and was overthrown. What came it its place was a transitional government and finally Bolshevik rule.

Weimar Germany had an entrenched establishment: banking, government, corporations, bureaucracy all working together. The corruption was obvious. Then it became intolerable with hyperinflation and deep economic retrenchment. People were suffering and looking for answers. Most people regarded Hitler as a non-ideal messenger, but he was fine in a pinch. No one expected the results.

The list of failed establishments replaced by still more wicked states is long indeed: Mexico, Spain, Italy, Argentina, Venezuela in the last century, and Iraq, Syria, and Libya in our own times.

The conflation of the state and the establishment has caused countless revolutionary movements to go wrong. Eastern Europe overthrew its establishments in 1989 but kept their states, resulting in mixed-economy social democracies. Russia got rid of the Bolsheviks in 1990 and created an authoritarian oligarchy in its place. To be sure, the results in these cases were better than before. But as the Italian, Russian, French, and German cases illustrate, that is not always the case. The results differ according to the plans and designs of the new power holders.

You might point to the American Revolution as a contrary case. We tossed out the British monarchy and invented freedom! But think again. The war itself created a new establishment consisting of politicians, military generals, bond dealers, and influential landholders. Twelve years after the Declaration of Independence, these groups got together and formed a new government that, in time, became as oppressive and restrictive — and in some ways, more so — as the one the revolutionaries overthrew. And this occurred despite the existence of classical liberal political norms and intellectual culture.

Nonetheless, in our times, freedom lovers have become so enraptured with the idea of opposing the establishment as such that many have lost sight of the actual goal of establishing freedom. It’s for this reason that so many have fallen for Donald Trump’s claim that he deserves support solely because he owes nothing to anyone. Therefore, he is not part of the establishment.

Why is that good for liberty? He has said nothing about dismantling power. Indeed, he is on record with his desire to radically expand the power of the state. He wants surveillance, controls on the internet, religious tests for migration, war-like tariffs, industrial planning, and autocratic foreign-policy power. He’s praised police power and toyed with ideas such as internment and killings of political enemies. His entire governing philosophy boils down to arbitrary, free-wheeling authoritarianism.

As for Sanders, everything that is bad about the current establishment he promises to make worse with more programs, bureaucracy, taxes, controls, and government power in order to making life fair, just, and equitable. He speaks as if he’s never heard of the failed history of socialism and certainly hasn’t learned anything from it.

Some of these ideas are so extreme that, it’s true, the establishment doesn’t like them. That’s a good thing. Establishments are as Machiavelli described: stable machines that keep competitors at bay but otherwise seek to make the system work for themselves. They resist rampant populism that would lead to a pillaging of the nation that is serving them so well.

Bonfire of the Vanities

To understand Machiavelli, realize that his black beast was the cleric Savonarola, Florence’s quasi-dictator who led a mass movement of crazed pietists who pillaged and burned material possessions as a pathway to heaven. The Bonfire of the Vanities of 1487 was one result. This is exactly the kind of mania that establishments exist to keep at bay.

It is the height of political naivete and historical ignorance to believe that anti-establishment populism and the cause of human liberty are united in the same struggle. They are not.

Not that there is anything wrong with “the people” as such. As Trump might say, “I love the people.” They are great as consumers using their own property, as workers and entrepreneurs creating value, as family members, as managers of their own lives. But the people as absolute rulers over the political system? That’s a different matter. For instance, polls show that many people (30% of Republicans, 19% of Democrats) support bombing Agrabah, the fictional country in Disney’s “Aladdin.”

Think of Iraq or Libya as recent cases. From what we observed from media coverage, the masses were struggling against despots and sought their overthrow, hoping for a future of human rights and democracy. What we got was the opposite. Only too late did most people discover that these wicked establishments were all that were standing between their populations and the advent of terror.

Here’s the problem with political revolutions. One group leads the revolution, while others follow. If the revolution succeeds, the leaders expect a payout. The main payout is the control of the state apparatus that outlives the establishment’s overthrow. It makes sense that the results will tend to be more ruthless, vengeful, and bloody than anything that came before.

This is not a case for the establishment. It is a case against disestablishmentarianism as an ideal. The ideal is liberty, not the overthrow of existing elite structures as such. Rampant and unchecked populism can be as much an enemy of liberty as unchecked rule by an entrenched power elite.

We need to be alert to the difference. A movement toward a lasting liberty has to think long term, and not find itself buffeted by the winds of politics that promise overnight results. The goal should be the tearing down of power itself and its replacement by simple human rights and a society that functions according to civilized standards.

Top Down or Bottom Up?

Top-down political putsches are particularly dangerous in our times. The establishment is already on the run because of technological innovation. The ruling class is gradually losing control over communication, education, industrial development, civic planning, consumption, and so much else. The old models have been discredited and new ones are replacing them, organically, in a sustainable way.

A new autocrat from the left or right threatens everything. A political movement fueled by bloodlust — mobilized by raw resentment and crying out for vengeance — could empower a new form of oligarchic control, resulting in a calamity that no one intended but no one can control once it has power.