Greenspan the Undertaker and His Countless Victims

Emi and Glen Yamasaki were a smiling couple that waved at their neighbors in the Sun City Anthem neighborhood of Henderson. Other retirees who lived near them couldn’t believe the Yamasakis committed suicide by jumping from the top story of the Silverton Casino’s parking garage.

What neighbors didn’t know is the couple’s golden years were not so shiny. Having bought their home at the top of the market in 2005, they were likely underwater and were facing foreclosure and other money troubles. W.C. Varones’ “Greenspan’s Body Count” counts Mr. and Mrs. Yamasaki as victims 257 and 258.

“A decade after the peak of his diabolical, deliberately created housing bubble, the 21st century's most prolific serial killer is still killing,” writes Varones on his blog. “Less than a month after his most recent murder, Alan Greenspan has killed a married couple in Las Vegas.”

The Man Who Knew

Sebastian Mallaby describes Varones as a “vituperative blogger” in his book The Man Who Knew: The Life and Times of Alan Greenspan. However, the blog, which likely undercounts “mortgage-related suicides,” provides prescience to Ayn Rand’s nickname for Greenspan, “The Undertaker” – joining other nicknames such as “the Maestro” and “the Greatest Central Banker Ever.”

Of Mallaby’s very readable account of his life, the Maestro himself called the book “not always positive, but accurate.” Mallaby believes his subject knew all about the bubbles the Fed was creating but didn’t act. But, of course, the market did act, harshly. It’s Mallaby’s view that Greenspan could have pricked these asset bubbles and somehow let the air out slowly, making it painless for everyone.

So why didn’t he? The “greatest central banker in history” insisted in hindsight that bubbles were impossible to detect until it was too late.

No doubt Murray Rothbard is somewhere laughing. Mallaby mentions Greenspan’s devotion to Ayn Rand, laissez-faire capitalism, and the gold standard often. But, as Rothbard wrote, “For Greenspan, laissez-faire is not a lodestar, a standard, and a guide by which to set one's course; instead, it is simply a curiosity kept in the closet, totally divorced from his concrete policy conclusions.”

"For Greenspan, laissez-faire capitalism is not a lodestar, a guide by which to set one's course; instead, it is simply a curiosity kept in the closet."The shy undertaker was not a swashbuckling Randian hero or libertarian firebrand, but a passive-aggressive political manipulator. However, those inside the Fed, like Alan Blinder, gushed as Greenspan was retiring, “Financial markets now view Chairman Greenspan’s infallibility more or less as the Chinese once viewed Chairman Mao’s” – an interesting and rather backhanded compliment from an economist who occasionally butted heads with his boss.

In either case, history would say otherwise. Other than New York, Greenspan never saw a bailout he didn’t support or a bubble he couldn’t create. After all, it kept both Wall Street and the political class happy – both here and abroad. The man who grew up without a father and with an overbearing, doting mother wanted to gain powerful people's’ approval. He hated confrontation.

If Greenspan was familiar with Austrian Business Cycle Theory, and he should have been, he’d have known crashes and recessions are needed to correct the malinvestments created by central bank monetary interference. To paper over crashes and bail out losers is to destroy precious capital by keeping it in the hands of those who waste it.

However, Greenspan was a Keynesian forecaster who, as Rothbard explains, had no interest in Austrian economics or economic theory at all. Murray, who had met Greenspan, admitted he didn’t understand how Greenspan rose to power. “He’s the least charismatic person I’ve ever seen,” Rothbard said. “He has the persuasiveness of a dead mackerel.”

Most libertarians are familiar with Greenspan’s 1966 article "Gold and Economic Freedom," an attack on fiat money and central banking. Years later, Congressman Ron Paul asked the Fed Chair to sign an original copy. As Greenspan signed, Paul asked him if he still believed what he wrote in that essay some 40 years before. “Greenspan – enigmatic as ever – responded that he ‘wouldn't change a single word,’" writes Michael Kosares.

But to read Mallaby, Greenspan was not so much an enigma as much as he was duplicitous. For instance, President Reagan was very interested in returning to a gold standard and mentioned it often. A Gold Commission was even formed. Meanwhile, Greenspan “feigned empathy with his adversaries and played skillfully for time, morphing from an ardent advocate of gold into its most devious opponent,” writes Mallaby.

In the nearly 700 pages of text, two things are strangely not mentioned: the Enron Prize for Distinguished Public Service, which Greenspan accepted just a few days after Enron filed paperwork admitting to having fabricated its financial statements for five years, and his dissertation.

Greenspan’s mentor was Arthur Burns, who happened to chair Murray Rothbard’s dissertation at Columbia. The fruit of Rothbard’s work was the seminal Panic of 1819. Meanwhile, “Alan,” Princeton economist Burton Malkiel gushed, “is one of the smartest people I’ve ever known in my life,” but didn’t manage to file his dissertation until 1977 at New York University, where boyhood friend Bob Kavesh urged him to finish his Ph.D.

As exciting as it was to find Greenspan's dissertation, there wasn't much to it.Jim McTague, a reporter for Barron's, secured a copy in 2008. As excited as McTague was to get his hands on it, there wasn’t much to it. It was merely a collection of articles totaling 180 pages. “Two chapters that had been published as articles in the American Statistical Association's annual proceedings contain several pages of algebraic equations that, frankly, made our head ache,” wrote McTague.

Paul Wachtel, an NYU economics professor who was on Greenspan's dissertation committee, defends Greenspan’s work, claiming, “the chapter written by Greenspan in 1959 on investment risk and stock prices anticipated by 10 years the Q ratio developed in 1969 by the late James Tobin,” who would become a Nobel laureate.

Mallaby sprinkles his narrative with anecdotes that make The Man Who Knew very fun to read for those of us who lived through the roller coaster Greenspan economy and appreciate political skullduggery á la House of Cards. Although, with the way the author describes Alan and wife (finally) Andrea Mitchell, you’d think they were as glamorous as Brad and Angelina.

And who knew there was a “Manley Put” supporting stock market prices before there was the famous “Greenspan Put”? Perhaps ironically, the Manuel (“Manley”) H. Johnson Center For Political Economy at Troy University has one of the most free-market oriented economics programs in the country. 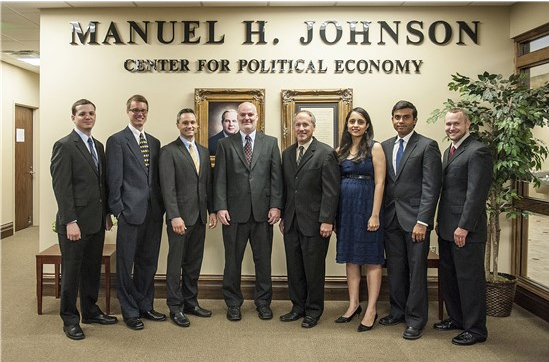 I had the occasion to meet Manley before a Troy football game and we traded stories about Rothbard. Johnson was a 38-year old vice chair at the Fed when Greenspan took over. He is described by Mallaby to have “shocking youthfulness” and “the courtly charm of a Southerner.” I can verify that he still does.

The idea that the Federal Reserve is somehow independent of the executive branch is quashed by the author. Greenspan, like his mentor Burns, was eager to do the President’s bidding. George W. Bush’s first meeting as President was with the Fed Chair. Greenspan made a trip to Arkansas to meet with President-elect Clinton.

The Man Who Bailed

Ultimately, Greenspan’s gift was timing. Janet Yellen, then the president of the San Francisco Fed, is quoted by Mallaby as saying on Greenspan’s last day in January 2006 that “it’s fitting for Chairman Greenspan to leave office with the economy in such solid shape.”

As it turned out, he left just in time: the bubble was a year away from popping and Ben Bernanke would step in to engineer the bailout of all bailouts, prolonging the fallout to this day. Meanwhile, Greenspan earned $250,000 by speaking to a “handful of Lehman’s hedge-fund clients,” just a week after leaving his Fed post. (Lehman would file for bankruptcy a year and a half later.) Then work began on his memoir, aptly entitled The Age of Turbulence, for which Greenspan was paid $8 million.

Ultimately, Greenspan's gift was timing.The man who knew is actually the man who bailed out: countries, companies, and finally himself. Ayn Rand always had her doubts about Greenspan, and would frequently ask her associates, "Do you think Alan might basically be a social climber?"

To this day, Greenspan is still in high demand as a keynote speaker. He is represented by the Washington Speakers Bureau which claims it is “Connecting You to the World’s Greatest Minds.” He is addressing the Private Equity International CFOs and COOs Forum this month.

Meanwhile, facing a retirement drowning in debt, Emi and Glen Yamasaki were 63 when they took their lives. The Maestro, Undertaker, or Greatest Central Banker Ever will reach the ripe old age of 91 in March, long outliving the victims of the bubble economy he created, and sadly reaping riches from his status and mythology.