The animosity between the Russian presidential candidates seems to be the best way to get snow cleared in Moscow.

Moscow has experienced some of the heaviest snowfall in decades this year and residents have been frustrated at the government’s slowness in clearing the snow and large snow drifts. According to this BBC report, Moscow residents have found that the only way to get city workers to clear snow is to write the name of opposition leader Alexei Navalny (see picture below) on it. 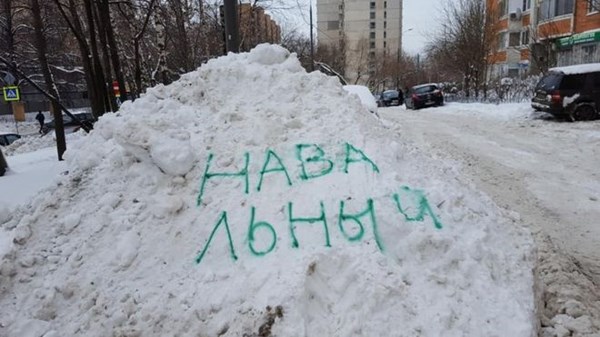 Russia’s presidential elections take place on March 18, and President Putin is running for a fourth term. Navalny, a lawyer and political activist, is barred from the contest as a result of a fraud conviction that many consider retaliation, and he’s calling for a boycott of the election next month. State media never mention him by name and Putin famously refuses to call Mr. Navalny by his name, referring to him only as “that person” when asked about him.