At best, government can secure a person's pre-existing rights.

Today’s Quotation of the Day is from pages 22-23 of Georgetown University law professor Randy Barnett’s must-read 2016 book, Our Republican Constitution:

If one views We the People as a collectio 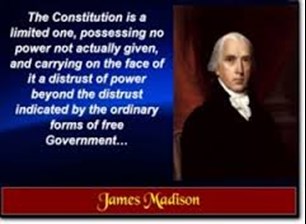 n of individuals, a completely different constitutional picture emerges [from the one seen today by “Progressives”]. Because those in government are merely a small subset of the people who serve as their servants or agents, the “just powers” of these servants must be limited to the purpose for which they are delegated. That purpose is not to reflect the people’s will or desire – which in practice means the will or desires of the majority – but to secure the pre-existing rights of We the People, each and every one of us.

Each of us has, throughout our lives, many agents. Some are formal (such as lawyers and realtors) while others are informal (such as the friend who agrees to run an errand for you). These people serve us, and we, in turn and in various ways, serve them – for example, we pay them money for their services.

Importantly, the ‘power’ of each of these agents to act for us is confined to the purpose for which we hire that agent. I delegate to my real-estate agent the power to represent me in selling my home; I do not thereby delegate to her the power to sell my car, to decide how my children are to be educated, or what I may eat for lunch.

Under the American constitutional system, elected officials are agents of the citizens of the politically defined regions from which these officials are elected. These political agents are no more the originating sources of their own powers and duties to represent the citizens who are their principals than, say, is your realtor the originating source of her power and duties to represent you, the person who hired her to sell your house.

When any such transfer of ownership occurs – wherever there is any such stripping away of rights from the individuals who possess them – what is really there is a brute exercise of raw power regardless of how gaudy is the philosophy that is used to portray this occurrence as something more profound.