If investors and employers are clueless about the next political disaster, they hold back from financial commitments

Governmental policies can and do cause uncertainty among private entrepreneurs.

Policy-driven uncertainty rises during political turmoil or elections, and during the implementation of major new policies and programs. Recent implementation of new policies (i.e. The Affordable Care Act, Dodd-Frank, and The Recovery and Reinvestment Act) left employers wondering about how these new laws will affect their costs.

Attempts by Republicans to undo The Affordable Care Act created even more doubt about future economic conditions. Bad policies should be undone, of course. However, intense political fights over the future of major policies and programs do make it harder for entrepreneurs to go forward with new projects. Public bureaucrats may also react to uncertainty by holding off on new hiring.

Policy driven uncertainty was high during the 2008 crisis, and also during the slowest part of the post-crisis recovery.

How can the effects of policy uncertainty be quantified more precisely? One of the most disconcerting aspects of the slow recovery is the relative lack of job opportunities. Those who watch economic reports carefully have become accustomed to disappointing monthly reports from the Bureau of Labor Statistics.

The Job Opening Labor Turnover Survey (JOLTS) provides regular data on hiring and firing in national labor markets. Monthly jobs reports have shown some improvement in some months during the past year, but hiring has generally been slow for many years now. Why has the job market been so weak? Slow job growth is certainly not the result of inaction on the part of government officials. On the contrary, people in government have borrowed and spent money faster than ever before.

A plot of the Economic Policy Uncertainty Index against hiring during the 2002 to 2016 period, lagged by two months, reveals a clear and expected negative correlation. 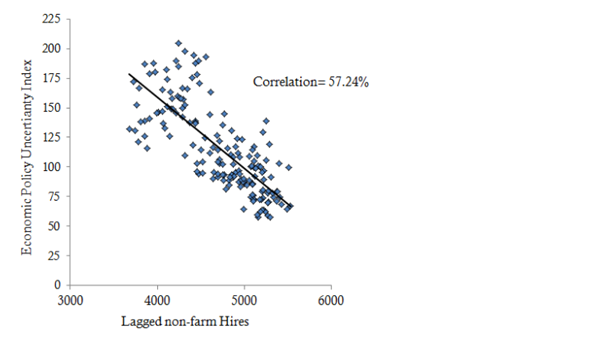 Theoretically speaking, the idea that policy uncertainty would dampen hiring is sensible. A 57% correlation indicates that a causal relationship between two variables is very plausible. When theory and data point in the same direction, few doubts should remain.

Slow hiring over the past seven years adds up to a tremendous loss of potential increases in private wealth. While what is done in the past is just a sunk cost, lessons from the past can help us to avoid costly waste in the future. Many people assumed that private bankers caused the 2008 Crisis, and that governmental policies could fix the economic situation.

It is easy to assume that, since employers have been reluctant to hire more employees, we must turn to public officials for help. There is real evidence that government policies that were intended to help have had the unintended consequence of hindering recovery.

Government has grown rapidly in recent years, with few signs of having a positive effect on economic conditions. Governmental programs often have perverse incentives, incentives that result in economic waste. There is another issue to consider: governmental policies can and do cause uncertainty among private entrepreneurs. At least part of the solution for the weak economic recovery of the past seven years would then simply be for politician to stop trying to fix our problems: laissez-nous faire.