FEE is proud to welcome Zilvinas Silenas as our 11th president this spring. I recently had the chance to visit with Zilvinas, whom I first met over five years ago during the excellent Atlas Network Think Tank MBA program. Here we discuss his background, growing up in a communist country, and the huge opportunity he sees as FEE’s incoming president.

We’re thrilled to have you join us this spring in Atlanta, Zilvinas! Our readers are sure to wonder how you first came to share FEE’s worldview. What was your introduction to the ideas of freedom?

My first encounter with the ideas of freedom was in the 1990s during the collapse of the Soviet Union, the departure of Soviet troops, and, ultimately, Lithuania’s independence. My second introduction came in 1999 when I was studying economics in the U.K., when I encountered the concepts of market failure and externalities. “Sure,” I argued, “some market outcomes may be imperfect, but why do we assume that government intervention would produce perfect outcomes?” So it must have been through the study of economics that I started on the path to freedom formally.

I imagine that it’s not hard for someone who grew up in a communist context to be formed deeply through that experience. How far has Lithuania come since independence from the Soviet Union? Is socialism at all still viable there today?

First, I think Americans misunderstand how bad life was under communism; otherwise, we would not have remarks from the likes of Bernie Sanders that bread lines were (are?) a good thing.

Second, many fail to understand how fast Lithuania is catching up to countries that had an enormous head start. In 1995 our GDP per capita (adjusted for purchasing power) was barely a quarter of that in Austria, now it’s risen to two thirds. We still have a long way to go, but this progress occurred precisely because government was largely removed from people’s everyday lives.

Third, many people assume that Lithuanians are somehow now immune to socialism because they lived through it. Sure, people hate old school Stalinist socialism; however, the everything-I-like-is-a-human-right socialism is as seductive there as anywhere else.

We certainly hear a lot today about how socialism is simply generosity enacted through government. (Some call this “democratic socialism” to describe expanding the welfare state.) It can be frustrating to feel the need to correct the record about what socialism actually is and has wrought. What philosophical or political argument can you never resist?

I love engaging in doomsday scenarios or when people claim that something is “inevitable.” I am not denying global trends or cause and effect, but if we are talking about human events, we have to remember that individuals can influence the world for better or worse. Population growth outstripping food production seemed inevitable for Malthus at the beginning of the 19th century, but in the beginning of the 20th century Haber and Bosch invented synthetic nitrogen fertilizer, which saved the world from Malthusean hunger games. Suddenly, what looked like an inevitability became an anachronism. Individuals took on inevitability and won.

I am a techno-optimist and a firm believer that the ultimate natural resource is a human mind. So whenever someone says that humanity is doomed because we have not enough of X (for example, oil, water, rare-earth metals, etc.) or too much of Y (for example, carbon dioxide), I jump in to argue that individuals can solve nearly everything. But, of course, we can mess everything up as well.

You’re coming to FEE from leading one of Europe’s leading free-market public policy think tanks for nearly a decade. What is the biggest lesson you’re looking forward to applying to FEE?

I’ve learned that, first, you have to show that your ideas are not only beneficial, but also morally correct. You can push a policy reform legislatively or use litigation to block a bad policy proposal in the courts, but if you fail to demonstrate that what you are proposing is the right thing to do, then your changes are going to be temporary at best.

Second, if you want to reach people’s hearts and minds, you need to speak to what people care about. Most people have more important things on their minds than the intellectual duel of socialism versus classical liberalism. They care about how to take care of their families and how to put food on the table. Obviously, we should not change our content or sacrifice our values in order to appear popular, but we have to think very hard whether our proposals address actual people’s problems. If someone is proposing to subsidize food costs, we have to show that we have better proposals rather than just scoff at “big government,” “socialists,” or “statists.”

Third, our message has to reach sizeable portions of the population. If we are saying that we are going to change the world by a pen rather than a sword, our letters have to reach many mailboxes. There are many think tanks that spend a lot of money on writing things that no one reads. I have and I will pursue the approach of making our ideas relevant and compelling.

It’s amazing when strangers approach me on the street to shake my hand and tell me that they agree with what I say on TV. It’s a huge rush when socialist members of parliament call to boycott our emails for being too persuasive. My biggest achievements, however, have been when our products, such as the Economics in 31 Hours high school textbook, earned two Templeton Freedom Awards along with an award from the London Book Fair.

Why have you chosen FEE as the place to continue your freedom-advancing career?

Over the past few years FEE has made Atlanta our home. What’s the most exciting thing you expect from living in Atlanta?

I’ve lived in Lithuania, Wales, and Connecticut, but I’ve never lived so far south, so I am looking forward to warm winters and sunlight. I’ve been to Atlanta a couple of times and everyone is so polite!

Let’s talk about when you’re not working–What do you enjoy doing recreationally? 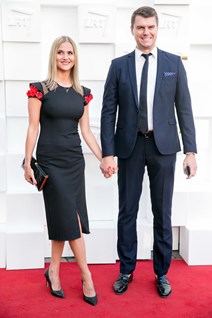 My wife Rosita and I enjoy attending many social functions, dinners, etc. We both enjoy strategy games, Lord of the Rings, and squash. Rosita is involved with social outreach and volunteering. I play basketball, which I hope to continue in Atlanta. I am also looking forward to exploring the outdoors. The highest point in Lithuania is less than 1,000 feet, so I am looking forward to hiking.

We’re looking forward to showing you the trails and blazing new ones with you, Zilvinas. Thank you for your time, and welcome aboard!

Thank you–I could not possibly be any more excited!