Even though many countries “may want to be like the Nordics with a more extensive safety net and a more egalitarian structures,” it wouldn't work in America.

Europe is a rich, well-educated, orderly place. And many Americans not only like to visit and do business there, but also see it as an aspirational economic model.

Well, not Greece, and Italy so much, but certainly the Nordic nations. Many progressive Democrats really have a thing for Scandinavia and its egalitarian social democracies. “I think we should look to countries like Denmark, like Sweden and Norway, and learn from what they have accomplished for their working people,” Bernie Sanders said during one of his debates with Hillary Clinton. And there are certainly Europeans who agree. For instance, I recently had a long chat with by Anu Partanen, a New York-based Finnish and American journalist, about her book The Nordic Theory of Everything.

In another Q&A, however, my AEI colleague Stan Veuger was skeptical that going Nordic was as easy or efficacious as progressives and Partanen believe. Along the same lines, a 2012 analysis by Daron Acemoglu, James Robinson, and Thierry Verdier argues that even though many countries “may want to be like the Nordics with a more extensive safety net and a more egalitarian structures,” it’s not really possible to have “cuddly” capitalism with America’s more high-pressure, competitive, or “cutthroat” capitalism. From their research:

As a matter of fact, given the institutional choices of other countries, if the cut-throat leader were to switch to such cuddly capitalism, this would reduce the growth rate of the entire world economy, discouraging the adoption of the more egalitarian reward structure. In contrast, followers are still happy to choose an institutional system associated to a more egalitarian reward structure. Indeed, this choice, though making them poorer, does not permanently reduce their growth rates, thanks to the positive technological externalities created by the cut-throat technology leader. This line of reasoning suggests therefore that in an interconnected world, it may be precisely the more cut-throat American society, with its extant inequalities, that makes possible the existence of more cuddly Nordic societies.

And if you want to know what the phrase “positive externalities” means in this case, take a look at these two charts from the Wall Street Journal looking at venture-backed private companies valued at $1 billion or more in Europe and America.

And now the US:

And while the US gains in terms of direct jobs and taxes by companies and employees, most of the benefits that flow from these companies are widely shared. Most of the value of, say, the iPhone, isn’t captured by Apple.

Still, we like that the US economy is able to generate this high-impact, fast-growing, innovative new firms. As AEI’s Edward Conard writes in his new book, The Upside of Inequality: 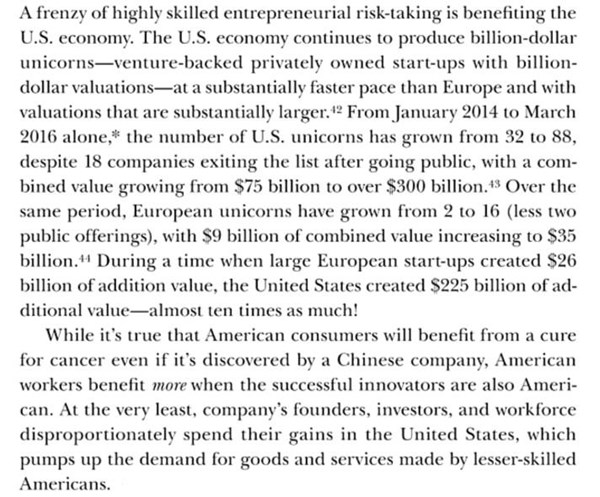 Not much talk about this sort of thing this election season, or about what sort of public policy can create an even better ecology for this important competitive advantage. And why does the US do so much better than Europe in this area? In addition to research cited above, here are a few explanatory blog posts:

Why can’t Europe create its own Facebook, Apple, Netflix, or Google? Here’s what Europeans think

Why does the US generate more fast-growing tech startups than Europe?

Finally, speaking of cuddy capitalism, here is a bit from an excellent piece by John Gapper of the Financial Times that touches on the issue:

This week is Oslo Innovation Week, a gathering of technology start-ups, venture capitalists and Norwegian companies such as Statoil, the state-owned oil and gas company. The theme is omstilling, the name for Norway’s nascent shift to living without the energy industry that has brought it wealth and welfare for 45 years.

Why hurry, some wonder. Its 5.2m citizens are among the world’s comfiest, with gross domestic product per head of $75,000. Its oil-funded sovereign wealth fund, set up in 1990 to help it avoid “Dutch disease” — the syndrome of resource wealth driving up national currencies and weakening other sectors — is worth $880bn. Its oil and gas reserves should last for another half-century.

The trouble is that Norway is too comfortable. It takes a crisis to get most people to change their ways radically or for an economy to adjust the way that it works. Whatever you think of Brexit, it is one of those crises. At the moment, Norway has more official think-tanks and innovation incubators than entrepreneurship and disruption.

The oil fund is exemplary in many ways: by taking the wealth largely out of the hands of the government and directing it into overseas investment, Norway has avoided the worst of Dutch disease. But it adds to the sense of the country having a cushion against change: the fund’s very existence extends its deadline to reshape the economy.

The citizens are also cushioned. The government devotes the equivalent of 20 percent of “mainland” GDP — the output of the non-energy economy — to social benefits, and Norwegians work 80 per cent of average hours in OECD countries, the equivalent of one less day a week. The energy sector is highly paid and productive but productivity growth elsewhere has lagged behind.

Norway has the potential to adapt. It has less of a human resources challenge than the UK: its people are well educated and offshore exploration requires engineers with skills that are useful in technology and software. The most coveted attainment for an 18-year-old is not to become a banker but to study engineering at the Norwegian University of Science and Technology.

But this potential has to be exploited and Norway remains hesitant about change. There were plenty of young people touting start-ups at Innovation Week but many work part-time for big companies and experiment with entrepreneurship in their spare hours. They do not need to take the plunge.

This first appeared at AEIdeas.