Down and Out in the Middle-Class Economy

The truth about growth, recovery, and unemployment

The president recently boasted of the success of his administration’s economic policies, which he calls “middle-class economics.” He describes his approach as “helping working families feel more secure in a world of constant change.” Who can blame him? People like to feel secure.

Given the nature of politics, we should expect politicians to embellish their policy accomplishments and downplay their failures. But Obama’s recent claims regarding our true economic conditions have gone well beyond embellishment and evasion to outright falsehoods. It’s either mendacity or denial.

One need only look at the facts to get some perspective on the real state of the economy.

President Obama claims that “we’ve seen the fastest economic growth in over a decade” — but there is no evidence for this claim. Actual GDP growth rates have been unusually low in recent years, even as GDP measures liberally include both fat and muscle. 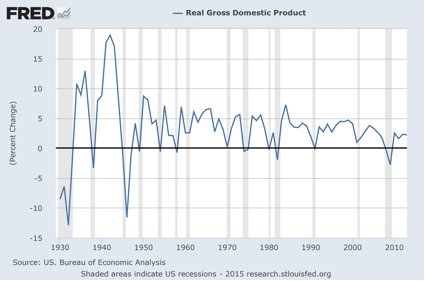 A casual glance at the above graph is enough to disabuse the electorate of the idea that growth has been fast or stellar. Yet, President Obama would like to craft the narrative that his administration’s policies have not only rescued the economy, but set it ablaze.

The “recovery” of the last six years is even worse than the above graph indicates. While the GDP growth rate has been historically low, it should have been at historic highs. Why? The economy has much untapped potential. 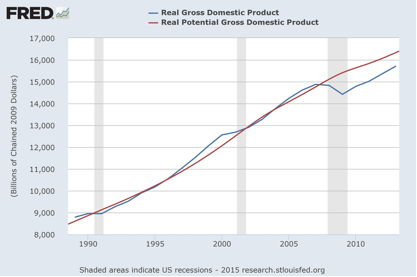 Growth in the past six years has barely reduced the gap between actual and potential GDP. Given the large untapped potential in the economy, GDP growth should have been faster than it was during any other expansion in the past half century, but that didn’t happen. 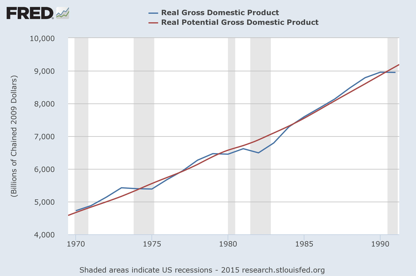 Real statistics reveal a boom-bust cycle in the economy up to 2008 and a persistent gap between actual and potential GDP since 2008. The lack of a real economic recovery since 2008 has had dire consequences for American workers. President Obama claims that “our unemployment rate is now lower than it was before the financial crisis,” but this statement is also false. The U-6 unemployment rate gives us a true indication of economic conditions when it comes to putting people back to work. 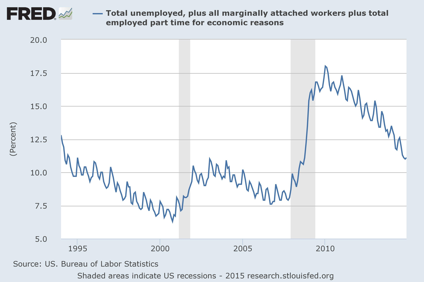 Full accounting of unemployment shows the unemployment rate in double digits since 2008. The lack of a real recovery has left millions unemployed. The president dodges the failure of the “economic stimulus” in his 2009 Recovery and Reinvestment Act by focusing on the official U-3 unemployment rate — a statistic that ignores millions who have simply given up looking for work in recent years, but are able.

The president said something recently that we should take seriously, however: “When what you’re doing doesn’t work for fifty years, it’s time to try something new.”

Federal officials have been trying to “manage the economy” with fiscal and monetary stimulus for half a century. Presidents began taking the advice of demand-side economists during the 1960s, and there has been little deviation from this practice since then, even during President Reagan’s supposed “supply-side” years. The results of the policies favored by both President Obama and his predecessors are clear: management of the economy delivers a boom-bust cycle at best and relative stagnation at worst.

The real evidence indicates that we are living in the worst period of this federally managed economy. President Obama’s “middle-class economics” is nothing more than the same old demand-side economics, only on steroids. Fiscal and monetary “stimulus” policies of the past six years have been some of the most ambitious ever tried.