Every four years, hundreds of thousands of Republicans in New York and California vote, but none of their votes end up influencing their state’s electoral votes because of the winner-takes-all system. Democrats who cast ballots in South Carolina and Texas have no meaningful impact on the presidential election because their votes are drowned out by the majority of voters in the state. As Steve LeBlanc of the Denver Post writes, “When Donald Trump won more than 52 percent of the Texas vote during the 2016 election, he pocketed all 38 of that state’s Electoral College votes just as Hillary Clinton, who won California with 61 percent of the vote, swept up all 55 of that state’s electors.”

The Electoral College is a central pillar of American democracy. Without it, our country’s leaders could be voted in by the overflowing metropolises without regard for the farmers and factory workers in less populated states. But the Electoral College isn’t perfect. Some have argued it badly distorts the vote.

Adopting proportional representation is not a scheme to twist elections to benefit one party. Both would benefit from this reform.

Clara Wheeler, vice chairwoman of the State Board of Elections in Virginia, argues that the congressional district method better represents all the citizens of a state. “When Virginia takes a position that is all or nothing, vast numbers of your communities—your constituents—have no say in the Electoral College.”

Americans seeking to improve the presidential election system and see that less competitive states are not ignored should reform, not abolish, the Electoral College. As it happens, the Constitution allows states to do just this by allowing votes to be divided proportionally according to congressional districts.

Adopting proportional representation is not a partisan scheme to twist elections to benefit one party. Both parties would benefit from this reform. In Article Two, the Constitution clearly lets all 50 states choose how to allocate their electoral votes, and Maine and Nebraska already use the congressional district method. If the entire nation adopted this reform, our elections would better represent the will of the American people without succumbing to majority rule. 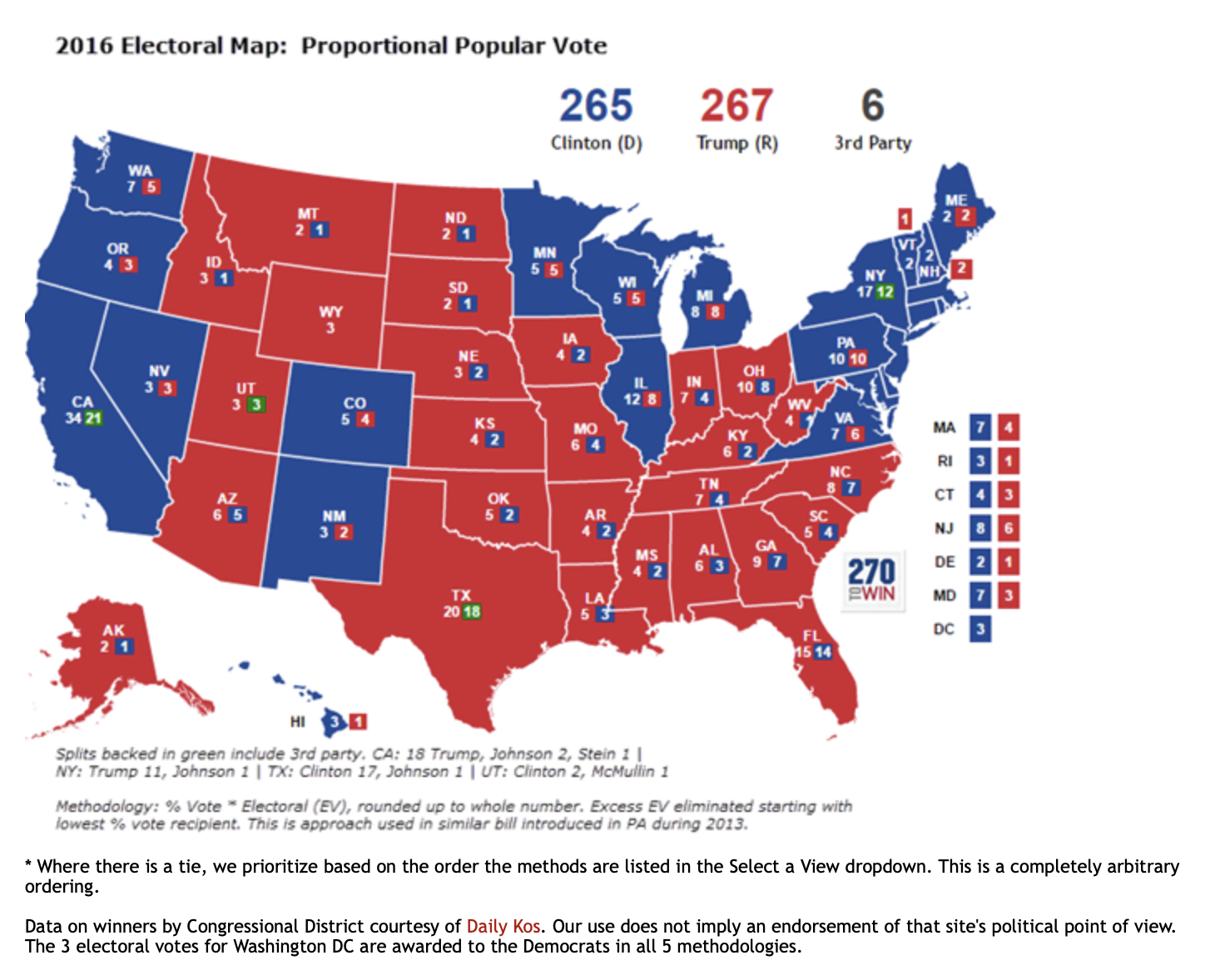 This map shows that Trump would have still won the presidency because even though he lost the popular vote, he still won the majority of congressional districts. Florida demonstrates the problem critics of the current winner-takes-all system cite. According to The New York Times, Trump won 48.6 percent of the Florida vote, with Clinton close behind at 47.4 percent. In actual votes, the difference was only 112,911, an incredibly small amount compared to the total number of votes in Florida: 9,501,617.

Proportional representation is not simple majoritarianism. The US is not and should not be a direct democracy. The Founding Fathers warned against “the tyranny of the majority,” which is why they set up a republic.

As James Madison wrote in The Federalist Papers, no.10:

To secure the public good and private rights against the danger of such a faction, and at the same time to preserve the spirit and the form of popular government, is then the great object to which our inquiries are directed. [Pure] democracies have ever been spectacles of turbulence and contention; have ever been found incompatible with personal security or the rights of property; and have in general been as short in their lives as they have been violent in their deaths. A republic... promises the cure for which we are seeking.

By eliminating the winner-takes-all model, we can constitutionally reform the Electoral College, our best safeguard against the tyranny of the majority. In order to uphold the equal protection clause of the 14th Amendment, we need to ensure that the votes of Americans reasonably and proportionally impact elections. Proportional representation also minimizes gerrymandering and boosts voter turnout.

Swing States Would No Longer Have Exaggerated Importance

This reform would reduce the importance of the “swing states”: Colorado, Florida, Iowa, Michigan, Minnesota, Ohio, Nevada, New Hampshire, North Carolina, Pennsylvania, Virginia, and Wisconsin. Instead of competing for huge chunks of electoral votes, candidates would have to campaign and fight for each congressional district, not just the whole state. Candidates would focus on a variety of states and districts, not just the competitive states. Small states will still be influential proportional to their population. This was true for Maine in 2016, when Trump visited Lisbon, a tiny town of less than 10,000, and ended up winning two of Maine’s four electoral votes.

We have 13 million people across the state from top to bottom and we shouldn't allow one community of people to determine who the presidential electors are. Representational democracy is what we are and this allows that. It allows a state to realize that we’re diverse and we are a diverse state ideologically. When we have a winner takes all system it does not show the diversity that is Illinois. And I think this allows us to get back to what the Founding Fathers had in mind.

As Abraham Lincoln said, we should strive for a government “of the people, by the people, for the people.” Proportional representation upholds this principle and better represents America’s voters when compared to the winner-takes-all method.