Does Government Spending Help the Economy?

How much government spending is enough, and how much is too much? While some spending on infrastructure, defense, and courts is probably beneficial, many economists suspect that public spending has decreasing marginal benefits: after a certain point, further spending results in slower growth by crowding out private sector activity.

To illustrate this theory, economist Richard Rahn of the Cato Institute developed the “Rahn Curve,” as pictured below. The peak of the Rahn Curve is the optimal or “growth maximizing” size of government, relative to the overall economy. 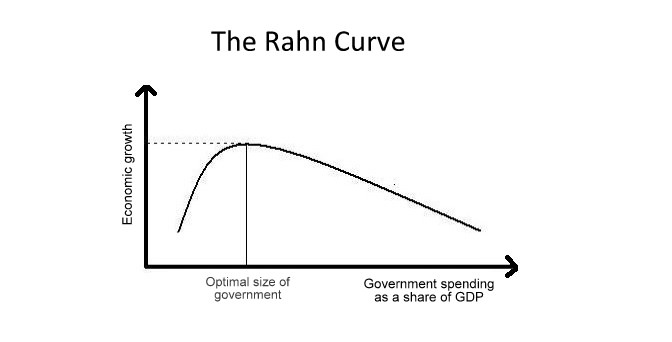 While we have strong theoretical reasons to suppose that governments cannot allocate resources as efficiently as private markets (and have little incentive to try), what does the empirical evidence say? The best macro-level evidence for the validity of the Rahn Curve comes from the fact that countries with large governments tend to have less economic growth than countries with small governments.

In a book published by the World Bank, two economists examined the relationship between government size and economic growth for Europe and the world as a whole. After controlling for numerous variables known to affect economic growth, as well as accounting for reverse causality, the economists found that:

[In Europe], higher initial government size has led to slower economic growth… Government [spending] reduces growth, particularly when it exceeds 40 percent of GDP. Perhaps because governments are smaller outside Europe, there is no evidence that government size generally harms growth in the global sample.

Similarly, a 2011 survey of the research on government size and economic growth in wealthy countries found that:

The research is rather close to a consensus: the correlation [between government size and growth] is negative, and the sign seems not to be an unintended consequence of reverse causality in the sense that government generally expands during economic downturns… The most recent studies find a significant negative correlation: An increase in government size by 10 percentage points is associated with a 0.5 to 1 percent lower annual growth rate.

Other recent reviews of the literature on military spending and government transfers — two of the largest budget categories in the United States and other western countries — found that higher levels of each are associated with slower economic growth.

But that’s not all: several other studies also suggest that countries with relatively large governments tend to experience higher rates of unemployment, and, of course, high unemployment results in less output than if more people were working. One paper by economists at the University of Delaware’s Department of Economics found that “positive shocks to government outlays slow down economic growth and raise the unemployment rate.”

Likewise, research from the International Monetary Fund found that increasing public hiring — a popular prescription to alleviate unemployment since at least the New Deal — fully crowds out private employment and consequently reduces economic growth, while incurring substantial fiscal costs to a diminished tax base.

In developed countries, limiting the size of government can help the economy grow faster. Studies explicitly looking at the non-linear relationship between government size and growth typically find that government spending hurts growth after it exceeds 25-30 percent of GDP. One paper found that over three-quarters of developed countries have levels of government spending that are detrimental to their growth. The author concluded that, “The concern about large governments is not misplaced. Ever-expanding governments will have negative effects on long-run growth.”

Based on an extensive body of research economist Dan Mitchell has proposed a Golden Rule for fiscal policy: government spending should grow slower than the economy itself. Such a rule would effectively ensure that government doesn’t outpace (and eventually swamp) the private sector.

There are also some ways to enhance economic growth without reducing government spending. There is evidence that governments can compensate for high levels of taxation and spending by implementing market-friendly policies in other areas. Research also shows that simply changing what government spends money on can enhance growth. A study of wealthy nations found that “reallocating total spending towards infrastructure and education would be positive for long-run income levels.”

While big governments may not increase growth, they could be providing other benefits, such as better education, more equality (assuming that has some intrinsic value), or other social improvements. But it’s not obvious that throwing more money to politicians or bureaucrats will guarantee stronger performance there, either.

A paper from the European Central Bank examined how public sector performance — as measured by a number of societal outcomes, such as income inequality, infant mortality, economic performance, and stability — varied across industrialized countries. They also examined how efficient the public sectors in each country were in attaining better economic and societal outcomes by measuring the amount of relevant public expenditure that is used to achieve a given performance level. The results?

So how much is too much? There seems to be a substantial amount of evidence that larger governments in the West are inefficient and economically handicapped by their bloated public sectors. While the conclusions of the studies are provisional and always subject to revision, the available evidence suggests that less is more when it comes to government spending.