New data are in, and the results are encouraging.

When I give speeches about modern welfare states, I’ll often cite grim data from the IMF, BIS, and OECD about the very depressing fiscal consequences of ever-expanding government. 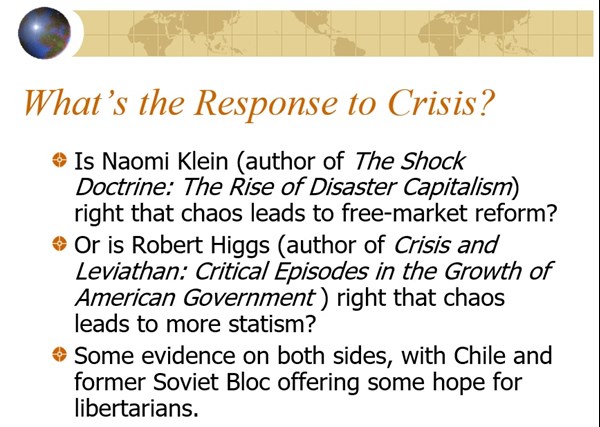 And if I really want to worry an audience, I’ll augment those numbers by talking about the erosion of societal capital and explain it’s very hard to adopt necessary reforms once the work ethic and self-reliance have been replaced by a culture of dependency and entitlement.

I basically warn people that many western nations (including the United States) are doomed to suffer Greek-style fiscal collapse. Depending on the type of speech, this is where I sometimes share a slide suggesting that there are two possible outcomes once an economic crisis occurs.

I’ve generally sided with Higgs, though there obviously are cases—such as Chile—where bad statist policies were followed by sweeping economic liberalization.

But, based on new research from the International Monetary Fund, it may be that Klein has a stronger argument (which would be a depressing outcome for her, since she favors bigger government).

Here are some of the issues that the authors investigated.

Relying on a new database of major past labor and product market reforms in advanced countries, we test a large set of variables for robust correlation with reform in each area. …structural reforms are notoriously difficult to implement…one of the most prominent hypotheses put forward in the literature, namely that crisis induces reform… we attempt to minimize value judgements and measurement error by employing a newly constructed “narrative” dataset of major reforms in four areas namely product market regulation (PMR) in network industries, EPL for regular workers, EPL for temporary workers, and unemployment benefit systems. … The large welfare costs of economic or financial crisis can break the deadlock over welfare-enhancing measures that could not be adopted otherwise due to conflict over their distributional consequences.

In short, they wanted to find out whether bad economic news (as captured by data on “GDP growth, deep recession, unemployment, crisis”) leads to pro-market reforms.

The answer is yes.

Our main result supports some form of the crisis-induces-reform hypothesis across all four reform areas. High unemployment, recession and/or an open economic crisis tend to be associated with a greater likelihood of reform. The effect is economically significant. For example, an increase of 10 percentage points in unemployment (as seen in several European economies in the aftermath of the Great Recession) is associated with an increase in the probability to undertake a major EPL reform for regular contract of about 5 percentage points—that is, about twice the average probability in the sample.

Here’s a chart from the report showing a big spike in deregulation in the late 1990s/early 2000s. 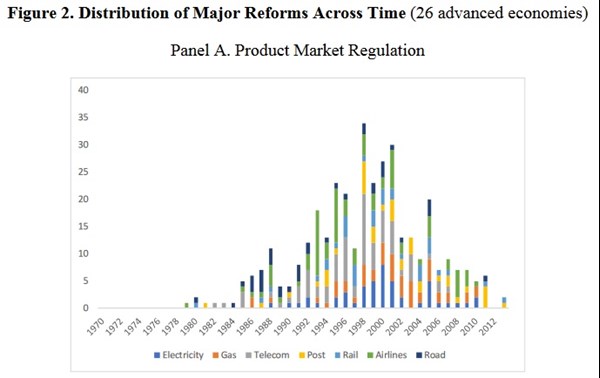 And here’s a chart showing nations that took steps to cut back on unemployment subsidies. 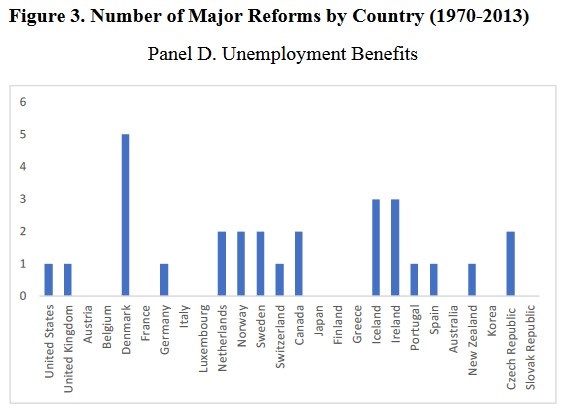 Keep in mind, by the way, that some nations (such as Austria) may not have reformed because they never adopted bad policies in the first place.

Kudos to Denmark for implementing so much reform. And Greece wins a Booby Prize for failing to adopt desperately needed reforms.

I was also happy to see some results that bolster my argument in favor of jurisdictional competition as a tool to encourage better policy.

We also find evidence that outside pressure increases the likelihood of reform in certain areas. Reforms are more likely when other countries also undertake them.

Interestingly, it doesn’t appear that ideology plays a major role.

My two cents is that ideology can play a role (think Reagan and Thatcher, for instance), but that there are plenty of instances of putative right-of-center politicians making government bigger (Nixon and Bush, to cite US examples) and several instances of supposed left-of-center politicians overseeing pro-market reforms (Bill Clinton being the obvious example from America).

I’ll close with a very important caveat. The IMF study looked at regulatory policy. There are no lessons to be learned from this research about whether crises produce better fiscal policy.

For what it’s worth, based on all the post-financial-crisis tax increases that were imposed in Europe, I suspect that the Higgs hypothesis is still very relevant.