Delta Paid Passengers $10,000 to Give Up Their Flight Seats. How One Economist Made It Possible

Julian Simon understood that inherent in market systems are the upsides of mutually beneficial exchange.

Delta Air Lines made headlines this month for offering passengers $10,000 to leave their flight. Several customers heading to Minnesota reported being offered $10,000 (in dollars, not flight credits) to voluntarily deboard an overbooked flight.

“On Delta flight from GRR to MSP and they just offered $10,000 for people to give up their seats,” tweeted Inc. tech columnist Jason Aten. “Ten. Thousand. Dollars.”

A different passenger on the flight, Todd McCrumb, told Fortune magazine it was no joke.

“It’s a true story,” McCrumb tweeted. “I was on that flight!”

It’s a true story. I was on that flight! Unfortunately, I could not take advance the offer, as I was flying with my wife who has very limited eyesight. She has to have me nearby when traveling

When flights are overbooked, it means airlines have more passengers with tickets for a flight than there are seats. And, as I previously reported, complaints about oversold flights have increased relative to pre-pandemic times.

And while you might think airlines offering to pay customers for overbooked flights represents a bug in the airline industry, it’s actually the opposite. Airline overbooking payments are an intentional strategy by companies, and they are a great case study on the power of markets.

To see why, let’s look at the history of airline overbooking.

Prior to 1978, the airline industry dealt with a consistent bug: oversold flights. Oversold flights occurred as a means for airlines to deal with the fact that passengers frequently skip flights. This would lead to several empty seats on flights that could have otherwise been sold to other willing fliers.

While one or two empty seats in a flight may not seem like a big deal, this adds up when you consider the thousands of flights airlines offer every year. Each empty seat represents a lost opportunity to fly passengers at a lower cost.

So airlines solved this problem by selling more tickets than there were seats. Oversold flights were in a gray area for federal regulations, but this didn’t stop companies. They simply claimed this was sometimes done unintentionally. The American Airlines handbook for 1974-1975 stated:

American Airlines never deliberately causes a passenger to be oversold. We tolerate only a limited number of oversold and inconvenienced passengers only because we must allow some margin of error in our operation.

Despite this claim, it was an open secret in the industry that airlines overbooked to increase sales.

And before 1978, there was no good solution to an overbooked flight. The previously mentioned handbook gave crews some guidance for these situations such as:

Reservations will select for removal, the most recently sold locally boarding passenger, whenever good judgment dictates that this passenger will be less inconvenienced than some other passenger, except when undue hardship will be incurred.

In extreme cases the handbook said, “it may be necessary to cancel the flight until all passengers have deplaned.”

Lastly, the handbook is clear that employees should “[n]ever give an oversold passenger anything in writing which admits an error on the part of American Airlines.”

So volunteers were solicited, and, if none could be found, employees arbitrarily selected passengers according to ambiguous perceptions of inconvenience.

So, airlines oversold their flights to the detriment of involuntarily bumped passengers.

An Economist Upheaves the Airline Industry

All of this changed after economist Julian Simon proposed a solution. In 1968, Simon, a professor of business administration at the University of Maryland, published an article cheekily titled “An Almost Practical Solution to Airline Overbooking.” His solution was simple—introduce a market.

Specifically, Simon proposed a reverse auction system. In this system, passengers would write down the minimum amount they would need to be paid to give up their seat. The person with the lowest amount would win the auction and receive money to give up the right to a seat.

It took nearly a decade for regulators and the industry to implement Simon’s solution in 1978— but it had many perks.

This market, like all markets, introduced a win-win scenario. Passengers who win the auction get an amount of money they value more than the seat. Other passengers don’t have to fear losing their seats. Airlines retain the ability to overbook flights. Everyone wins.

If you’re skeptical that airlines are made better off here, consider the data below. 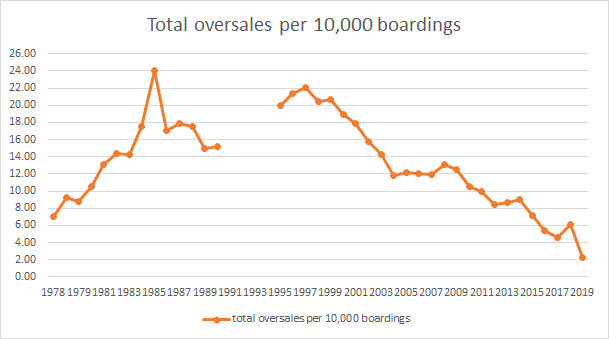 As you can see from the graph, airlines massively increased overbooking when the reverse auction system was implemented in 1978. This suggests the system was profitable for airlines. If it wasn’t, airlines simply could have suspended overbooking.

The total oversales per 10,000 passengers continued to be higher than 1978 until in 2017, when the infamous United Express Flight 3411 incident occurred which led to major decreases in airlines utilizing overbooking.

The Flight 3411 incident infamously involved Dr. David Dao who was involuntarily selected to deboard his flight. After refusing, an officer forced Dao off the plane leading to a broken nose and concussion. Before the incident, United tried to offer vouchers to incentivize volunteers, but they refused to offer more than $800.

After the incident, United and several airlines began to severely cut oversales, but post pandemic those numbers seem to be rising again.

This sort of situation, where a change leads to all parties being better off, is known by economists as a Pareto improvement.

The market had other advantages as well. Unlike the prior system, the passenger who gives up a seat is not chosen arbitrarily. Instead, the person who loses the seat is someone who doesn’t value it very much anyways. This is another advantage of markets. Resources tend to be allocated to the people who value them most.

These valuable features should come as no surprise. Simon’s solution was for airlines to create markets, and inherent in market systems are the upsides of mutually beneficial exchange and resources being allocated to highest valued uses.

So a $10,000 offer to incentivize someone to deboard a plane isn’t a failure of markets—it’s the beauty of markets in action. I can only hope to someday be on a flight that offers me $10,000 to make new plans.

Peter Jacobsen teaches economics and holds the position of Gwartney Professor of Economics. He received his graduate education George Mason University. His research interest is at the intersection of political economy, development economics, and population economics.