Requiring voters' consent to increase taxes or debt is a very effective check on the expansion of government.

A balanced budget requirement is neither necessary nor sufficient for good fiscal policy.

If you want proof for that assertion, check out states such as Illinois, California, and New Jersey. They all have provisions to limit red ink, yet there is more spending (and more debt) every year. There are also anti-deficit rules in nations such as Greece, France, and Italy, and those countries are not exactly paragons of fiscal discipline.

The real gold standard for good fiscal policy is my Golden Rule. And the best way to make sure government doesn’t grow faster than the private sector is to have a constitutional rule limiting the growth of government. 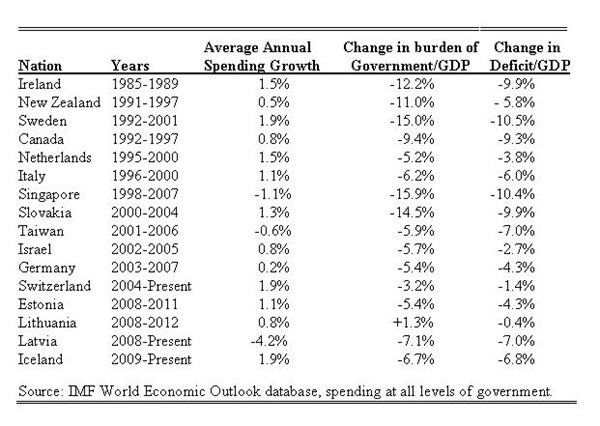 And it’s also why the 49 other states, assuming they want an effective fiscal rule, should look at Colorado’s Taxpayer Bill of Rights (TABOR) as a role model.

Colorado’s Independence Institute has a very informative study on how TABOR works and the degree to which it has been effective. Here’s a good description of the system.

Colorado voters adopted The Taxpayer’s Bill of Rights in 1992. TABOR allows government spending to grow each year at the rate of inflation-plus-population. Government can increase faster whenever voters consent. Likewise, tax rates can be increased whenever voters consent. …The Taxpayer’s Bill of Rights requires that excess government revenues be refunded to taxpayers, unless taxpayers vote to let the government keep the revenue.

And here are the headline results.

However, the study notes that TABOR was most effective during its first 10 years. It was less effective in its second decade because voters acquiesced to a “TABOR time-out” as part of referendum C in 2005.

The final decade included the largest tax increase in Colorado history, enacted as Referendum C in 2005. Decade-2 was also marked by increasing efforts to evade TABOR by defining nearly 60% of the state budget as “exempt” from TABOR. …Rapid government growth resumed in Decade-2, mainly because of Referendum C.

This chart from the study shows that outcomes were much better during the first decade of TABOR. 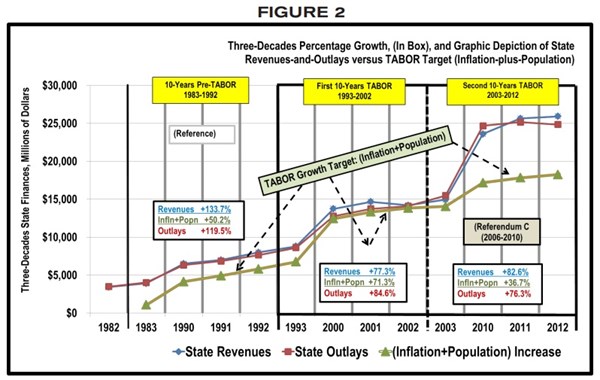 But a weakened TABOR is better than nothing. Here’s the conclusion of the report.

The Taxpayer’s Bill of Rights Amendment has worked well to achieve its stated intention to “slow government growth.” Although government has still continued to grow significantly faster than the rate of population-plus-inflation, the Taxpayer’s Bill of Rights did partially dampen excess government growth. …In terms of economic vitality, Colorado’s Decade-1 was best for Colorado. Unlike in the pre-TABOR decade, or in TABOR Decade-2 with its record increase in taxes and spending, because of Referendum C. Colorado’s first TABOR decade saw the state economy far outperform the national economy.

But keep in mind that the economic gains occurred in the first decade. 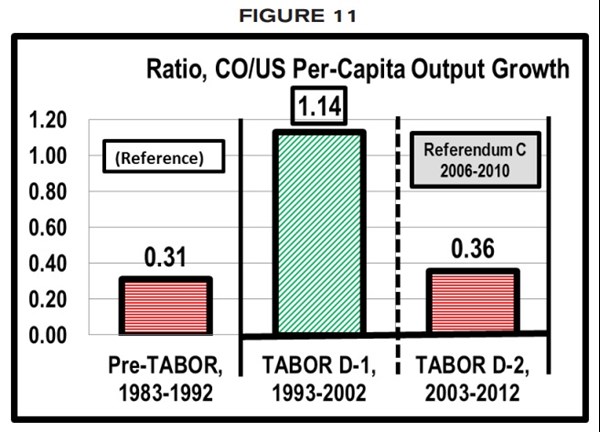 The bottom line is that spending caps are like speed limits in school zones. If they’re set too high, that defeats the purpose.

And in Colorado, the vote for Referendum C allowed a spending surge that made a mockery of TABOR.

But only temporarily, which is why that period was known as the “TABOR time-out.” The rules once again limit spending growth to population plus inflation.

For instance, TABOR made it difficult for state politicians to spend the additional tax revenues produced by marijuana legalization.

Needless to say, the political crowd hates having their hands tied. Which is why the pro-spending lobbies are agitating to once again gut TABOR. Here’s a clip from a local news report that does a good job of describing the current fight.

The battle actually started a couple of years ago. Here are some excerpts from a 2016 report by the Associated Press.

By 2030, Colorado’s population will grow from 5 million to 7 million people, thanks in part to a strong and diverse economy, the state’s famed Rocky Mountain quality of life, and its constitutionally-mandated low taxes. …The state’s Democratic governor, John Hickenlooper, is trying to find ways to squeeze more revenue for roads from the budget, while Republicans don’t want to tamper with the fabled 1992 constitutional amendment known as TABOR that keeps a tight limit on those taxes. …Under TABOR, voters must approve any state and local tax hike. Democrats are still stung by a resounding defeat of a 2013 ballot initiative to raise $1 billion for schools.

I’m amused by the fact that the above passage starts by noting the state has a “strong” economy. Too bad the reporter didn’t put 2 and 2 together and recognize that TABOR deserves some of the credit.

Likewise, this next passage cites a leftist who acknowledges growth in the state but pretends that it’s exogenous, like the weather.

Liberals think that’s a recipe for disaster, especially in a growing state. “What we have to stop doing is pitting necessary priorities like roads against other necessary priorities like schools and colleges,” said Tim Hoover, spokesman for the Colorado Fiscal Institute, which favors dismantling the amendment. “TABOR forces us to do that.” So far the low-tax crowd is winning. Even Hickenlooper acknowledges there isn’t a popular appetite to raise taxes, and his hopes of changing the classification of an arcane fee in the budget to free up revenue are opposed by Republicans… Republicans say the real problem is growing Medicaid spending. Colorado, which expanded the program under the Affordable Care Act, is spending about $2.5 billion on the health care plan.

Note that TABOR critics object to various interest groups having to compete for money.

But that’s exactly why a spending limit is so desirable. Politicians are forced to abide by the rules that apply to every household and business in the state. In other words, they have to (gasp!) prioritize.

Let’s conclude by reviewing some passages from a pro-TABOR column published last week in the Steamboat newspaper.

Colorado’s population has grown by nearly two-thirds since 1992, one of the fastest increases in the country. If you are part of the more than two million new residents who have arrived over this time, there are a few things you should know…the Taxpayer’s Bill of Rights is responsible for much of the state’s economic success, which likely drew you here in the first place. Between 1992 and 2016, median household income in Colorado grew by 30 percent, adjusted for inflation. …TABOR helped end years of economic stagnation and laid the groundwork for the state’s future success by keeping resources in the hands of Colorado residents who could put them to their highest valued use and checking overzealous government spending. …Its requirement that excess revenues must be refunded to taxpayers has also resulted in more than $2 billion being returned to the private economy… TABOR has empowered voters to reject roughly a dozen advocacy-backed tax hike proposals.

My favorite part is when they cite critics, who confirm that TABOR is successful.

A Denver Post editorial last year complained, “TABOR’s powerful check on government spending in reality has been a padlock on the purse-strings of the General Assembly.” The check on spending is exactly the point, and it still allows spending to grow in-line with inflation and population growth. If government wants more money, all it has to do is ask. Requiring consent is hardly a “padlock.”

Amen. We could use some more padlocks in the rest of the country. TABOR should be nationally emulated, not locally emasculated.

P.S. Enjoy this amusing video from the Independence Institute. It shows politicians in a group therapy session about TABOR.

P.P.S. By the way, there is a spending cap in Washington, though it only applies to a small portion of the budget (appropriated outlays). Sadly, that very modest example of fiscal restraint has not been very effective. The group therapy session in Washington, otherwise known as Congress, voted to bust those spending caps in 2013, 2015, and earlier this year. Sort of D.C.’s lather-rinse-repeat version of Referendum C.