If people spent less time yelling at others to check their privilege and more time in deep discussion on the effects of prejudice, we would all be better equipped to battle injustice. 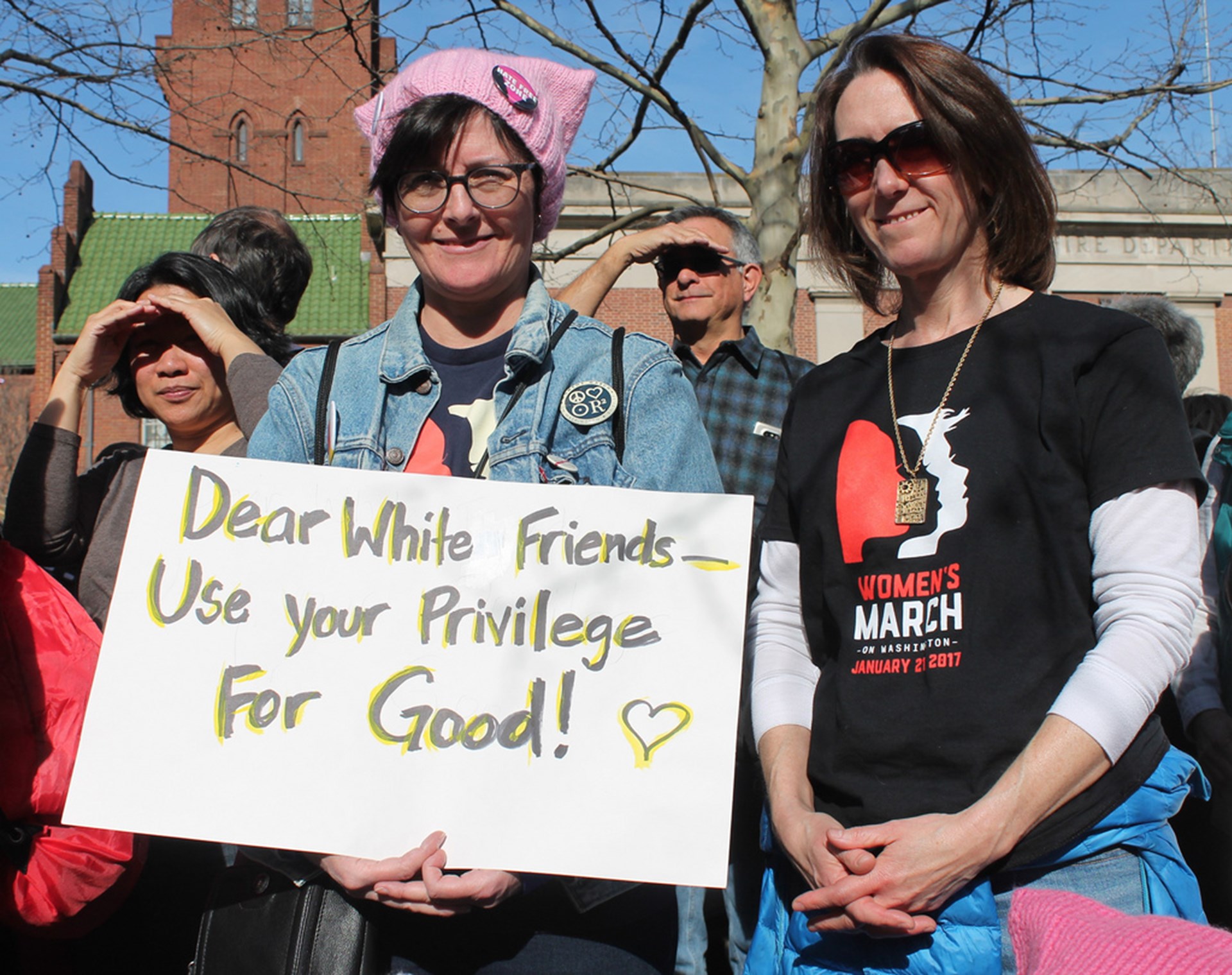 When you entered my college apartment, you were asked to do three things: check your hat, check your coat, and check your privilege. For my roommates and me, this was our little tongue-in-cheek declaration of liberalism.

Saying it was more about who we were than an actual request for reflection for one simple reason: Most everyone who walked through our door was checking the same privilege. Most of our guests were white. Many were gay, but few were easily-identifiable targets for violent homophobes or discriminating landlords. All were cisgendered and educated. All were attending the same expensive, private, liberal arts college—a college that only a few years previously was named “the whitest school in America.” We all lived on “the right side of the tracks” in a town that, because of redlining laws, was almost completely racially segregated. We were beyond privileged.

So why did we say it? Because we didn’t want to be complicit in the system that benefited us.

White supremacism, gender discrimination, and heteronormative oppression were constant topics of conversation. They were real elements of our lives, evident everywhere we went. We were living in St. Augustine, Florida, a city where racial conflict is as deeply embedded as the shells in the coquina brick of the Castillo de San Marcos. Walking through St. Augustine is a tour of racism, violence, and slaughter since 1565, which still affect the town to this day. Present-day black St. Augustinians are relegated to two neighborhoods: Lincolnville and West St. Augustine. Lincolnville residents are being pushed out of historic family homes because of gentrification and the high cost of maintaining “historic residences.” West St. Augustinians aren’t even recognized as city residents: their neighborhood is considered “unincorporated county territory” and does not have sewer, water line, or interstate access. Their neighborhoods were each divided from mine by one street, but there was a chasm between our experiences.

Every day we were faced with the sickening reality that people who looked like us had once terrorized and oppressed people who didn’t.

Every day we were faced with the sickening reality that people who looked like us had once terrorized and oppressed people who didn’t. We saw the lasting effects of racist culture and law everywhere we went. Individually, we had never (to the best of my knowledge) hurt or subjugated anyone. But if black St. Augustinians and Americans were suffering because of injustices done to their ancestors by people who looked like us, and had created a system that benefitted us, were we culpable?

Activists on our campus answered with a resounding “yes.” On the college campus, individuals were viewed and judged in the context of whatever privilege they were perceived to have. Privilege was a score weighted through all the lenses of intersectionality. Race, gender, sexual orientation, and gender identity were the most easily identifiable variables of privilege, but even the minutiae were considered. If your parents were still married, you were privileged. If you took out student loans, you were oppressed. Each layer of your identity contributed to your privilege score.

Your privilege score determined what you could discuss in polite company. Pro-life male students were silenced under the “no uterus, no opinion” doctrine. Discussion of racial issues was only permitted if the party being condemned was white. Questioning any aspect of Islam by a privileged party was instantly classified as Islamophobia. I was once called a racist for saying that a company has a right to deny service to people who won’t pay for it because the people in question were poor, black South Africans. “Check your privilege” was not an invitation to reflect on the lasting effects of prejudice. It was a gag order.

“Check your privilege” was not an invitation to reflect on the lasting effects of prejudice. It was a gag order. Privilege became a system to redistribute free speech to groups who had historically been oppressed, but like all systems of redistribution, it was built on theft. Rather than opening up the forums for all to speak freely, unencumbered by their ancestry, “check your privilege” and its accompanying rhetoric made minority opinions heard by silencing the majority.

We Have to Hear Bad Ideas to Refute Them

How do the best ideas win? Do good ideas perpetuate a culture because those who disagree are silenced? Or do good ideas cut through the noise?

We must be exposed to many arguments and worldviews in order to construct our own. We find truth by challenging our assumptions and justifying our beliefs. We can and should hear bad ideas. We should even hear evil ideas. There is a difference between hearing bad or evil ideas and agreeing with them, and if we never hear them, how can we eloquently refute them?

In the words of Frederic Bastiat, “the worst thing that can happen to a good cause is not to be skillfully attacked, but ineptly defended.”

How can we better our arguments about what is right and just if we never have to defend them?

How can we better our arguments about what is right and just if we never have to defend them?

Good ideas win in the long run. Freedom wins against tyranny and oppression. Legal protection of minorities wins over subjugation. Individualism wins over collectivism. Good ideas win because they are good, not because the alternatives are silenced.

And what about ideas that aren’t good yet but could be? Half-formed ideas are but a promising slab of marble: they become art through the chisel of civil debate. This is the duty of the college campus: to refine promising slabs of marble into works of art. How can we be transformed without challenge, without compromise, without strife?

Nassim Nicholas Taleb calls humans antifragile—in order to grow, we must be tested. We have to be buffeted around, offended, and confronted to become strong people. Silencing the opinions of people who disagree with us removes the chance to be tested.

Privilege is real, and we should all strive to recognize the role it plays in our lives. Privilege may be the reason your elementary school had a lower teacher-to-student ratio than did the school across town. It may be why your family had generational wealth or property. It may be why your ideas are heard in a boardroom, while your female colleague’s similar ideas are dismissed.

Checking your privilege should be an experience of reflection and humility. That is not the experience cultivated by shouting and silencing.

If people spent less time yelling at others to check their privilege and more time in deep discussion on the effects of prejudice, we would all be better equipped to battle injustice.