A new Housing Policy Toolkit from the White House admits that “local barriers to housing development have intensified,” which “has reduced the ability of many housing markets to respond to growing demand.” The toolkit, however, advocates tearing down only some of the barriers, and not necessarily the ones that will work to make housing more affordable.

Instead of relaxing artificial constraints on horizontal development, the toolkit advocates even tighter constraints to force denser housing.

“Sunbelt cities with more permeable boundaries have enjoyed outsized growth by allowing sprawl to meet their need for adequate housing supply,” says the toolkit. “Space constrained cities can achieve similar gains, however, by building up with infill.” Yet this ignores the fact that there are no cities in America that are “space constrained” except as a result of government constraints. Even cities in Hawaii and tiny Rhode Island have plenty of space around them–except that government planners and regulators won’t let that space be developed.

Instead of relaxing artificial constraints on horizontal development, the toolkit advocates imposing even tighter constraints on existing development in order to force denser housing. The tools the paper supports include taxing vacant land at high rates in order to force development; “enacting high-density and multifamily zoning,” meaning minimum density zoning; using density bonuses; and allowing accessory dwelling units. All of these things serve to increase the density of existing neighborhoods, which increases congestion and–if new infrastructure must be built to serve the increased density–urban-service costs.

Developers learned more than a century ago that people will pay a premium to know that the neighborhood they live in will not get denser. Even before zoning, developers used restrictive covenants to limit density because they knew people would pay higher prices for lots with such covenants. When zoning was introduced to do the same thing, many neighborhoods were built without such covenants, but that doesn’t mean the people in those neighborhoods will be happy to see four- and five-story buildings pop up among their single-family homes. 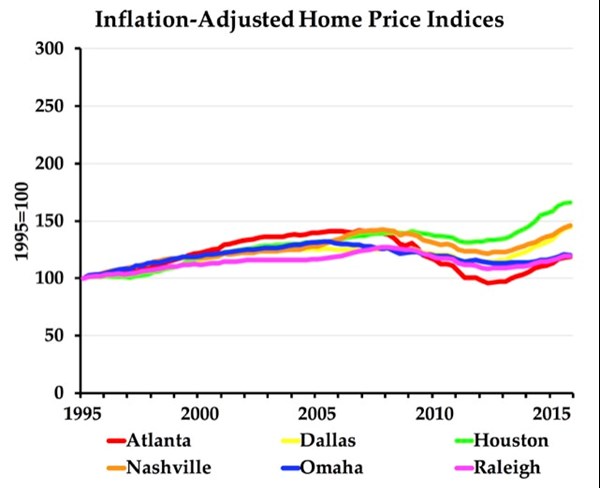 Urban areas with few regional growth constraints see only moderate changes in housing prices over time and still have plenty of affordable housing.

If there really is a market for higher densities, then developers should be allowed to build such densities.

Planners argue the market has changed and more people want denser development. This is belied by the toolkit, which also supports the use of property tax abatements and value capture incentives (i.e., tax-increment financing) to promote higher densities. If there really were a market for higher densities, such subsidies would not be necessary.

If there really is a market for higher densities, then developers should be allowed to build such densities in areas that are not already established low-density neighborhoods. But developers should also be allowed to build low-density neighborhoods at the urban fringe to meet the demand for that kind of development. Instead, state and local planning rules in California, Florida, Hawaii, Oregon, Washington, and most New England states have essentially made such low-density developments illegal.

Moreover, there is little reason to believe that “building up with infill” will make cities more affordable. Artificial constraints on urban growth make land many times more expensive than in unconstrained areas. Mid-rise and high-rise housing costs more to build per square foot than low-rise housing. 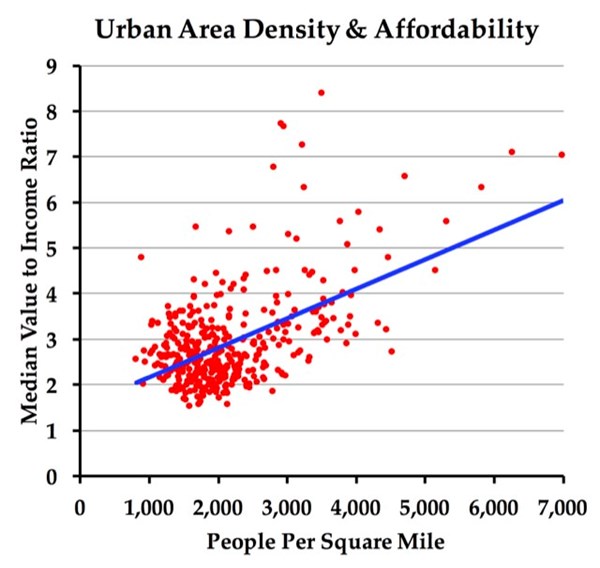 No matter how often urban planners chant, “grow up, not out,” the fact is that no urban area in the nation has ever made housing more affordable by increasing its density. In fact, as the chart above shows, there is a clear correlation between density and housing unaffordability.

Ultimately, what is wrong with the White House toolkit is that it is focused on local zoning when it should be focused on regional growth management.

The real danger is that the White House’s policies will be imposed, via the Department of Housing and Urban Development, on areas that have few regional growth constraints today. The increased regulation advocated by the White House will make those areas less affordable, not more, while it won’t do anything at all for areas that already have lots of growth constraints.

The White House toolkit calls its proposals “smart housing regulation.” Truly smart regulation would rely on policies that work, not policies that only work in the fantasies of urban planners. The policies that do work would better be described as “smart land-use deregulation,” as they involve dramatically reducing constraints in unincorporated areas. Until that happens, housing will continue to become less affordable in constrained areas.