When a country adopts the dollar as its medium of exchange, we call it “dollarization.” That’s what the government of Ecuador formally embraced in 2000.

FEE’s Hispanic Outreach—FEE en Español—is a program launched in May 2019 to formalize and grow FEE’s work in the Spanish-speaking communities of North, Central, and South America. And it’s on a roll!

In a matter of months, the fans on its Facebook page ballooned from a handful to 120,000. We’ve already surpassed 1.1 million minutes viewed on that new page alone. Dozens of videos in Spanish or with Spanish subtitles are set for release in 2020 on both social media and the website.

Working with partners in Mexico and Colombia, we addressed nearly a thousand students in those two countries this past November alone. We’ve distributed many thousands of copies of the Spanish version of Leonard Read’s famous essay “I, Pencil” and other FEE publications. Under the leadership of its director, Javi Perez, FEE en Español will host or co-sponsor numerous events in the region in 2020.

In this second week of January, we are in Guayaquil, Ecuador, where I will deliver speeches over three days to various audiences. In recent years, more than 120 students from Ecuador have attended FEE seminars in the US, so we expect a great turnout at a FEE alumni event on January 8. 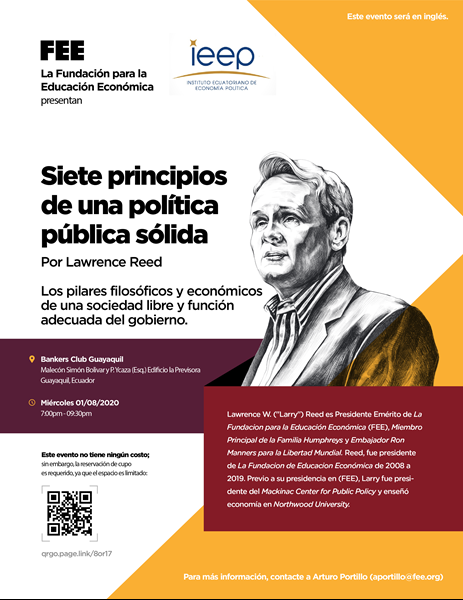 We’re also very excited about a conference in Guayaquil on January 9, when we’ll have the opportunity once again to work closely with long-time friends at the country’s distinguished free-market think tank, the Instituto Ecuatoriano de Economía Política (IEEP). At this event, we’ll be commemorating the 20th anniversary of the country’s “dollarization” in which IEEP played a key role.

What economists call “currency substitution” takes place when a country employs a foreign currency either parallel to or in place of its own. At least a dozen African countries, for example, use euros. When a country adopts the dollar as its medium of exchange, we call it “dollarization.” That’s what the government of Ecuador formally embraced in 2000, though the citizens of that country largely switched from the local currency (the sucre) to dollars months before without any direction from the central authorities.

To those Americans who wish the dollar itself was on far sounder footing than it is (count me among them, please): You might wonder why any country would dollarize. A hard money standard—gold in particular—arguably offers even greater long-term benefits. Alas, the world is an imperfect place. Sometimes you have to go for the most readily available alternative. So in 2000, Ecuador became the third country in Latin America to dollarize, Panama and El Salvador being the other two.

Dora Ampuero, who co-founded IEEP with her late husband some 30 years ago, is a respected economist and commentator and one of the architects of Ecuador’s dollarization. In a 2015 article, she explained the dire economic straits that preceded Ecuador’s adoption of the dollar:

Ecuador entered dollarization under a full-blown hyperinflation. At the beginning of the year 1999, the rate of exchange was 4,000 sucres per dollar; at the end of the year it reached 28,000 per dollar. Inflation was 60 percent, and the rate of devaluation exceeded 300 percent. In March, the government closed the banks for a whole week, then reopened and bailed out some of them by issuing bonds and created a new agency to guarantee the backing of deposits in the event of bank failure. In 1999, the monetary base grew by 552 percent.

Hyperinflations of Latin American currencies are almost too numerous to count. Many of the countries there have experienced at least one in the last century. Bolivia ruined its currency in the 1950s and then did it again in the 1980s, as documented in “Two Videos About Money.” I witnessed and wrote about Brazil’s hyperinflation of 1987. Price inflation in Venezuela increased briefly at a rate of 350,000 percent just last year. It’s the same old story: government monopolizes money then debauches it to help pay for its reckless spending; the people, meantime, get the shaft.

Ecuador’s 60 percent inflation in 1999 was calm by comparison to those examples, but it was enough for Ecuadorians to dump their government’s currency and preserve their savings and purchasing power by switching to dollars. George Mason University economist Lawrence H. White described it as a “bottom-up phenomenon, an expression of consumer sovereignty by money-users, to which the government finally conceded”:

The dollarization of Ecuador was not chosen by policy-makers. It was chosen by the people. It grew from free choices people made between dollars and sucres. The people preferred a relatively sound money to a clearly unsound money. By their actions to dollarize themselves, they dislodged the rapidly depreciating sucre and spontaneously established a de facto US dollar standard…Finally, in January 2000, Ecuador’s government stopped fighting their choice. Until that point the state tried to use legal penalties or subsidies to slow currency switching.

When the government in Quito officially opted for dollarization, it did so by largely following a proposal laid out by Dora Ampuero and IEEP. Hyperinflation disappeared. Prices stabilized. Interest rates fell. Confidence rose, and with it, so did investment and productivity. Dollarization was the success that the folks at IEEP predicted it would be. And that is what we will be celebrating in Guayaquil on January 9.

Critics of the plan complain that by adopting the dollar, Ecuador’s politicians and central bankers relinquished their power to employ their own discretionary monetary policy. But if the experience of Ecuador and so many other Latin countries proves anything, it’s this: you can do worse than America’s Fed, and indeed, most Latin countries at one time or another have.

Ecuador has a lot of work to do to get its economy on the right track. Indeed, its regulatory environment is one of the worst for business in the region. That makes me all the more grateful that IEEP exists and is pointing the way toward freedom and free markets. So while we hope for much more liberalization of the Ecuadorian economy in the future, we happily salute the IEEP for its monetary policy success of two decades ago!

When Giving Is Smart and When It Isn’t

Otto von Bismarck: The Man Behind the Modern Welfare State