Obamacare’s costs are starting to show

Someone at Buffalo Wild Wings decided to make the costs of the so-called Affordable Care Act (ACA) explicit in the restaurant’s register receipts. An estimated ACA cost of 2 percent was charged to each paying customer.

Adding the cost of a specific government program to a receipt is unusual. Normally, the only tax itemized on register tapes is sales tax — but these are a fraction of the true costs of governmental activity. There are, in fact, too many different government programs to list on each register receipt. Because the price of regulation is usually built into the prices of goods and services, we tend to pay for regulatory costs unwittingly.

Obama’s “Affordable” Care Act imposes regulations, taxes, and subsidies as a means of income redistribution. As usual, the goal is to tax and regulate higher-income people to subsidize those with lower incomes — but that’s never the way things work out.

Real people do not simply pay taxes and regulatory costs as required by written laws. Everyone tries to avoid taxes by whatever means are available. Tax avoidance usually stems from bargaining over prices in markets. Sellers push for higher prices, and buyers push for lower prices.

Sellers have costs to cover: labor, capital, and taxes. It is a simple fact of economics that when an entrepreneur’s taxes rise, he or she will pass part of that additional cost on to customers.

Regulations are de-facto taxes. There is no economic difference between taxing money from someone to fund some activity and a regulatory requirement to achieve the same goal. The ACA is a complex set of taxes.

How do entrepreneurs respond to ACA taxes? The same way they respond to all taxes, explicit or regulatory: by raising the price of whatever they sell.

There is an inescapable fact of taxation: tax burdens are always shared. Taxes charged to upper-income earners for redistribution are in some measure always redistributed to those with lower incomes through price increases.

While ACA benefits have been touted as “free” to lower-income recipients, this proposition is false — and impossible. Somebody always pays for insurance, or any other good. Goods that seem to be paid for by government only appear to be free because their costs are hidden or obscured. Costs of government programs, like the ACA, are just added into the total costs of taxation, and the costs of taxation are partly factored into the prices of all goods.

Taxpayers cannot buy the same amount of goods when final tax-adjusted prices go up. Economists call the effect of taxes on consumer purchases the tax wedge, because taxes drive a wedge between what consumers pay and what entrepreneurs receive. Taxes make goods more expensive for consumers and less profitable for entrepreneurs. 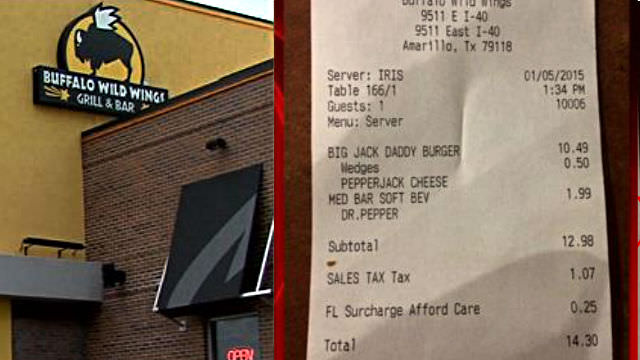 The explicit 2 percent ACA surcharge at Buffalo Wild Wings may or may not have been intended as permanent. The restaurant chain’s executives have already cancelled the policy after customers reacted negatively. But there is a lesson to be learned from the surcharge. Government programs have the superficial appearance of being free, but they never are.

Government’s lack of financial transparency often leads to an ironic outcome: things that appear to be government gifts end up costing more. Why? Because the public sector’s hidden costs mean less cost control in the public sector.

Private enterprises make costs clear with prices. Prices don’t itemize each cost, but because costs are more easily perceived in the private sector, people make greater efforts to control costs. Some find the explicit nature of costs in the private sector unpleasant. Conversely, the fantasy of a free lunch from the state does have a certain emotional appeal. But the inability of most people to perceive the costs of government makes it almost certain that these costs will be higher, compared to the efficiency the private sector can achieve.

As Buffalo Wild Wings made clear, the ACA is just another example of a government program that makes a false promise of free benefits. Rational economic analysis tells us that there ain’t no such thing as a free lunch, yet politicians continue to use that fantasy for political gain.

Let’s abandon the myth of gifts from government. Every action has an economic cost, public or private.