Both Students and Teachers Deserve Better Than This

If the status quo isn't serving the needs of educators and the children, what good is it?

The confirmation of Betsy DeVos as Secretary of Education was perhaps the hardest-won victory of President Trump’s nascent administration. Opposition to DeVos ran deep enough to require Vice President Pence to cast a historic tie-breaking vote.

This kind of stagnation isn’t typical among other nations.

To hear it from those on the left, DeVos is uniquely unqualified for the position. Her lack of personal experience with the public school system, coupled with her one-sided approach to education and purported ignorance of education policy make her unsuited to the position, they argue.

On the right, the response has been to call into question the political motivations behind opposition to DeVos. Teachers’ unions, after all, are some of the biggest spenders in U.S. politics and

their economic interests are threatened by the kind of reforms DeVos’ appointment might foreshadow.

It’s hard to know if either or both sides are being overly cynical. I don’t pretend to have any deep knowledge of DeVos or her new mantle. But one thing seems empirically true: the status quo of public education isn’t above reproach.

According to data from the National Center for Education Statistics (NCES), per-pupil spending on public education has increased roughly 1.7% annually since 1980. Student performance, however, has largely stagnated over the same period by various metrics. As I’ve written before:

The statistics are damning: Literacy rates among 17-year-old Americans peaked in 1971. Standardized testing reveals that math scores peaked in 1986. Test scores show a lack of improvement in math, science, and reading, in which respectively 25%, 22%, and 37% of American students are proficient.

This kind of stagnation isn’t typical among other nations; the United States showed much smaller levels of inter-generational improvement than other OECD nations. Up until about 1975, Americans were scoring significantly higher in math and literacy than Americans born before them. Since 1975, scores have plateaued, even adjusting for race and foreign-born status of students. As [Gallup’s] study states, this implicates the entire US school system.”

Test scores aren’t the only indicators of educational dysfunction. Fully 60% of first-year college students need to take remedial courses in either math or English (to be fair, you might attribute this in part to college admission policies). Companies are also reporting longer vacancies for STEM positions and increasingly are forced to delay projects or look outside the U.S. for workers.

To be clear, it’s not that US public schools are producing particularly terrible outcomes (admittedly, though, they are middling among the developed world). The real problem is spending on public education is becoming increasingly inefficient; we’re putting more and more resources into it and receiving little or no additional benefits. This is a long-term trend that should be addressed immediately to avoid throwing good money at bad policy.

In fairness, I have to point out that speaking of public schools in national terms risks obscuring that some public schools, usually found in high-income neighborhoods, perform incredibly well. However, unequal educational outcomes are often considered a bug, rather than a feature, of the public school system, which charter schools have in some cases been able to address with varying degrees of success (though there are charges that this is only possible because of selective admissions).

The Status Quo Is Hard on Teachers, Too

There is a perception that public school teachers are profiting hand over fist as a result of teachers’ unions, at the expense of students. But the truth is a little more complicated.

Policies that require students to attend schools in their district prioritize the school system over the scholars.

On one hand, strong teachers’ unions have engendered some policies that arguably favor educators over students. Teacher firing rates, for example, are extremely low. This is especially true for tenured teachers, of whom an average of 0.2 are dismissed per district for poor performance annually, according to the National Center for Education Statistics.

This is made possible (at least in part) by what effectively amounts to state-sanctioned local monopolies on education. Constraints on demand impede normal market mechanisms from weeding out inefficient suppliers (at least, that’s the theory embraced by school choice advocates). This isn’t illogical, and it explains the somewhat rare rift between black parents and the Democratic party line on school choice.

Consider a thought experiment: Imagine families were forced to shop for food only in their own neighborhoods. What might we expect to happen to the quality of food consumed by people in poor areas? What if we put limits on the number of new stores that could open?

In this light, it might be accurate to say that policies that require students to attend schools in their district prioritize the school system over the scholars.

On the other hand, a lot of teachers are being harmed by the current system–particularly the young and good ones.

Under current agreements, teacher compensation rates are in large part determined by longevity, both within the profession and teaching district. Young teachers–especially women teaching young children–are often underpaid relative to other professions. 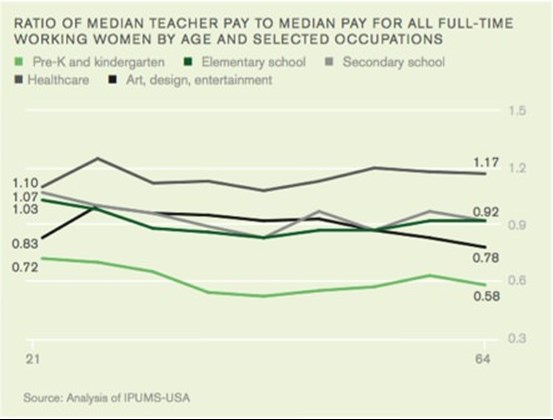 Additionally, collective bargaining agreements have led to pay compression (a narrowing of the pay gap between high and low performers) among teachers, which penalizes high-performing teachers and benefits low-performing teachers. Correspondingly, there has been a detectable decline in standardized test scores of new teachers since the 1960s. (The study I cited found these results to be true only among female teachers. For some reason, scores of incoming male teachers improved slightly over this period. If anyone has any theories as to why this might be, I’d love to hear them.)

The combination of longevity-driven pay and salary compression has made teaching a less attractive profession for the best candidates, who can earn more in other comparable fields. A 2014 survey by the American Federation of Teachers revealed merely 15% of teachers report high levels of enthusiasm about their profession, despite 89% feeling highly enthusiastic at the beginning of their careers.

What might we say about an education system that grows increasingly expensive, and without improvement for students or teachers? We might say that it needs work and we should be open to new ideas, in whatever form they might come. It might also be wise to proceed with caution; for better or worse, this is the system we have right now.

I don’t know if Mrs. DeVos’ agenda will result in improvements. The divergent problems of climbing spending and poor teacher incentive could prove difficult to address simultaneously, especially in the current political climate. But we should all remember the true goal of an education system–public, private, or somewhere in between—is to efficiently increase human capital. How that happens should be of secondary concern.

Eddie Ferrara is a writer from western Massachusetts. He blogs at eddiethoughts.com.