The opioid epidemic has evolved into one of the greatest public health crises of our time and has become a contentious aspect of the ongoing debate surrounding the Republican health care proposal.

There are theories that the Affordable Care Act exacerbated the opioid epidemic.

Voices on the left worry that the repeal of Obamacare’s Medicaid expansion and essential health benefits would worsen the crisis by cutting off access to treatment for addiction and substance abuse. Mother Jones and Vox have both covered the issue. Former President Obama’s June 22nd Facebook post stated his hope that Senators looking to replace the ACA would ask themselves, “What will happen to the Americans grappling with opioid addiction who suddenly lose their coverage?”

On the other side, there are theories that the Affordable Care Act (ACA) actually helped finance – and perhaps exacerbated – the opioid epidemic. It goes something like this:

Expanded insurance coverage was a primary goal of the ACA. Two of its policies that supported that goal – allowing adults to remain on their parents’ insurance up to 26 years of age and expanding Medicaid – unintentionally connected at-risk cohorts (for example, chronically unemployed working-age men and young, previously uninsured whites with an appetite for drugs) with the means to obtain highly addictive and liberally-prescribed pain medications at a fraction of their street price. Once addicted to prescribed pain pills, many moved on to cheaper and more dangerous alternatives, like heroin or synthetic opioids, thus driving the growth in overdose deaths.

This is a really interesting, if tragic, narrative, so I decided to take a deeper look by focusing on state-level analysis. I compared CDC WONDER data on drug-induced deaths with Kaiser Family Foundation data on expansion status and growth in Medicaid enrollment. 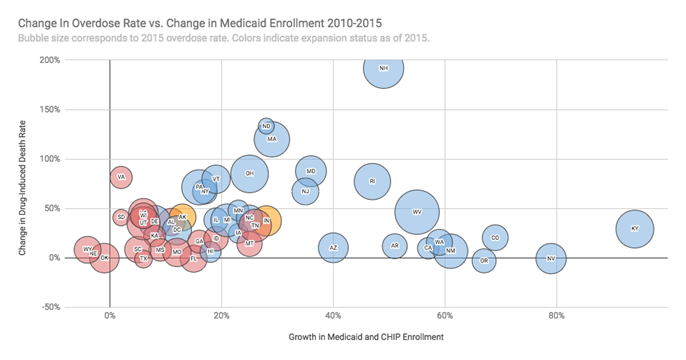 For a more in-depth analysis, check out this post.

The places where overdose rates have increased the quickest are perhaps the most interesting. With the exception of one state, overdose deaths are increasing the fastest in states that expanded Medicaid by 2015. The only non-expansion state to grow by more than 50% since 2010 was Virginia, which in 2015 still had a relatively low rate of 12.7 fatal overdoses per 100,000 population. For some perspective on how bad things have gotten, that rate would have been the 19th highest among states in 2005; today Virginia ranks 42nd in terms of OD rate.

On the other hand, there isn’t a noticeable correlation between increases in Medicaid coverage and increases in the rate of fatal overdoses. Additionally, the rates of overdose deaths in expansion states were increasing before many of the Affordable Care Act’s key provisions went into effect.

Starting around 2010, there was a dramatic divergence between would-be expansion states and the rest. It’s possible that states with accelerating rates of overdoses were more likely to expand coverage in response to increased frequency of fatal overdoses. 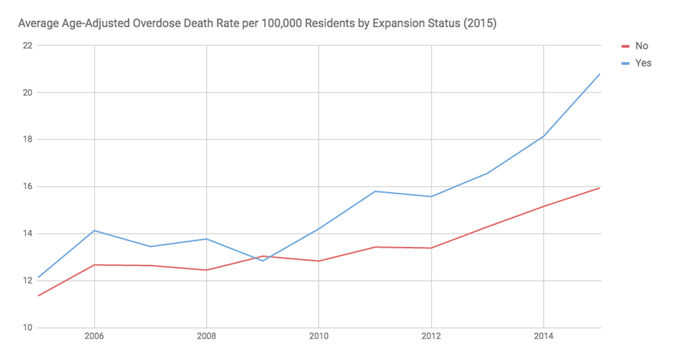 So what’s the deal? Did the Affordable Care Act agitate the opioid epidemic?

It would be difficult to argue it hasn’t been a factor on some level, given the far-higher rates of prescription, death, and opioid use among Medicaid patients compared with the general population, as well as the state-level trends in OD rates (with acknowledgement that state-level analysis is pretty clunky in this regard; for many reasons West Virginia’s population isn’t really comparable to California’s). I think the fact that state Medicaid programs are adjusting regulations for painkiller prescriptions is an acknowledgment of that.

But if the ACA had a negative effect, it must register as a drop in the bucket.

There are so many pieces to this story: lax prescription practices and the rise of “pill mills,” declining labor force participation, sophisticated distribution networks of Mexican heroin, bogus research and marketing on pain management, stark disparities between expectations and reality. It’s nice to think there’s one thing we can change to solve everything, but I don’t think we’re going to be so lucky.

Here’s another twist: Even if the Affordable Care Act had some negative impact, it could very well be that ACA repeal could make things worse.

Scrapping essential benefits coverage could lead to a loss or reduction in access to addiction treatment for millions of Americans. Moreover, gaining insurance has been shown to alleviate feelings of depression and anxiety. How then might we guess 20 million Americans will feel after losing their insurance? Given the feedback loop between pain and depression, this question deserves a lot of deliberation.

Eddie Ferrara is a writer from western Massachusetts. He blogs at eddiethoughts.com.