Blessed Fish! How the Market Brought It to Your Table

Here’s to fish, and here’s to the technology that has made it possible to enjoy, cheaply and easily, in every household. 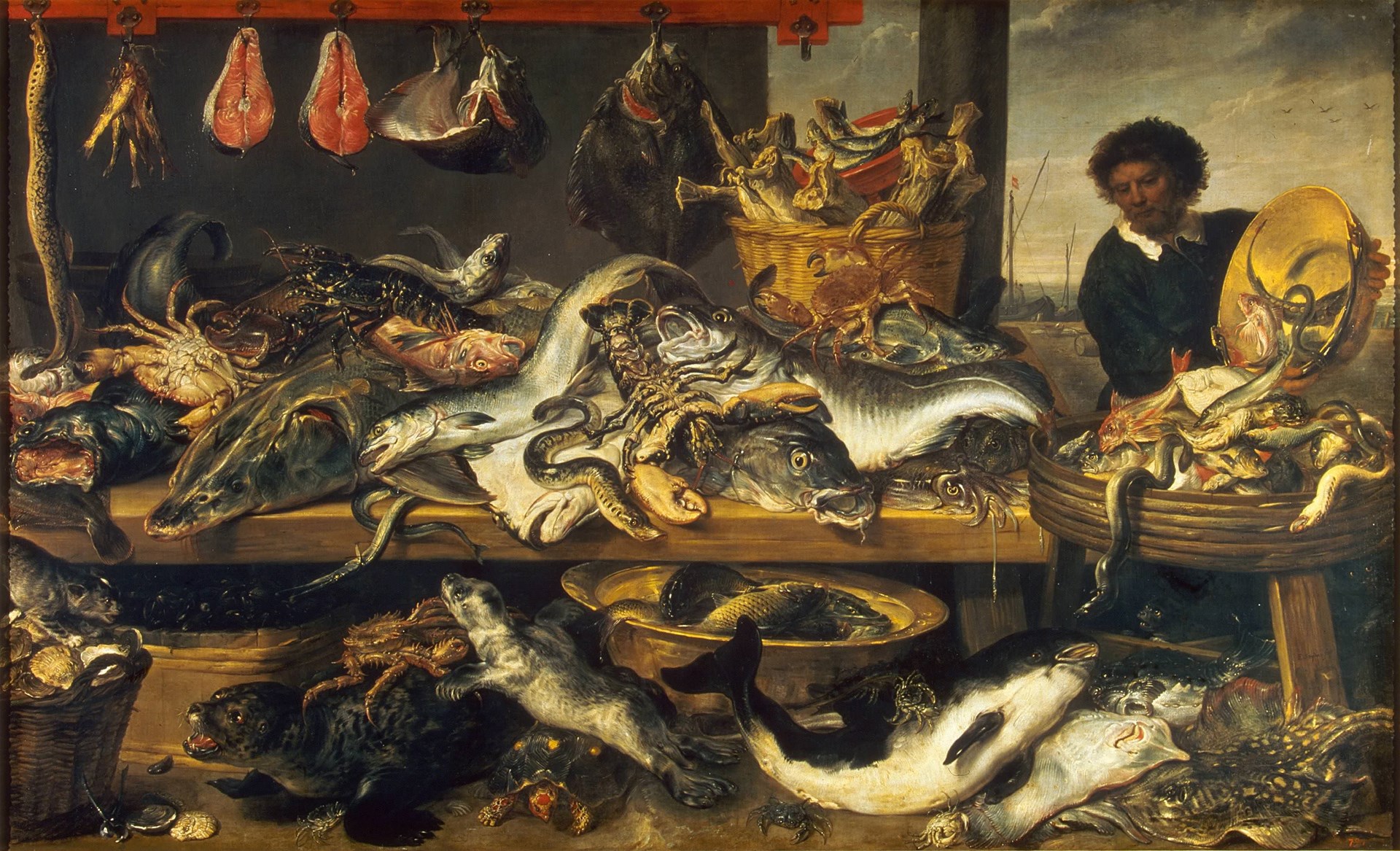 In the Renaissance, painters often featured fishmongers selling fish from tables right there for anyone to buy. Why? For the first time in history, people had money to buy things, from actual merchants. Fish for sale to anyone and everyone was a lovely sign of wealth, an indicator of progress.

Fish preparation now takes less time than it took the burger place yesterday to make me lunch.Still, you could only get it if you lived near the sea. Fast forwarding a few centuries, when I was a kid in West Texas, eating fish at home was unthinkable. Fish sticks, maybe. Otherwise fish at home didn’t exist. By culture, tradition, and by sheer availability, we ate beef.

Even today, many people are reluctant to prepare fish at home. This is my strong impression from talking to friends and colleagues.

This usually traces back to one bad experience. Maybe it came from childhood. The fish was fishy, boney, and just generally dreadful. That one experience can color a lifetime of food choices.

In my own case, I thought for years I would only eat fish at a restaurant. Only they know how to do it right, I thought. Surely I could never replicate that process at home. At most, I could make those awful breaded fish sticks Mom would drag out on dreaded occasions.

Well, dramatic things have happened to the market for fish over the past 10 years. It is wholly changed. Now you can get incredibly great fish at nearly every supermarket. At Wal-Mart, I recently found a vast selection — tilapia, flounder, swordfish, salmon, whiting, halibut, lobster, and so much more. The prices were ridiculously low. I’ve been sampling them all for months.

What’s the secret? Head to the freezer section. I know it sounds inferior. Wouldn’t you rather have fresh? Not any more.

And you don’t have to worry about timing. In the old days, when you bought fish, you had to eat it that night or risk having it become slimy and gross. Now it can stay in your freezer and be ready for you when you want it.

For the first time, the equivalent of fresh fish, stunningly yummy, is available to nearly everyone at low prices, ready for preparation right in your own kitchen. And despite the reputation that fish once had of being difficult to prepare, now it is easier than pork or beef, and even faster.

In other words, cut open the bag, and it is ready to go.

I find this just amazing. That’s a shorter period than it took the burger place yesterday to make me lunch.

And it is a fraction of the price.

What to do with it? It is almost impossible to mess up. You can throw it on foil and set it on the grill with butter, pepper, and lemon. You can put it in a pan with a bit of oil and vinegar or lemon. You can roast vegetables in the oven, throwing in the fish at the last minute and cooking it an extra seven or so minutes. You can do stir fry with veggies. You can hurl it into a tomato soup, or any soup, really.

Of course, you can also break out the FryDaddy and go to town, with a nice floury batter and good vinegar. Who can resist fish and chips?

The new fish is so fresh, there is not a hint of fishiness about it. The texture is perfect, and cooking it makes you feel like a gourmet. I’ve never served this to people who were not then impressed and amazed at how good it is.

I revel in the marvelous achievements of capitalism to bring fish from far-away oceans straight to my kitchen.As for its health benefits, there is no dispute. The American Heart Association recommends eating fish at least two times per week. People who eat fish live longer and have fewer chronic diseases. It provides high-quality protein without the saturated fat. In general, people who eat fish report feeling better than they do eating meat.

Special mention needs to be made of the merits of basa or swai, which is nothing but catfish raised in Vietnam. It was a program pushed by the US government. But in a classic case of business lobbying, the catfish industry forced the imports to be called something else. In my own private taste tests, swai is the same, or better, because it is meatier and bigger. It also costs much less than American catfish. It, too, is available in frozen varieties.

I’ve gone so nuts for this stuff that I eat this fish most of the time, simply because it is delicious and so easy. And I like to revel in the marvelous achievements of capitalism to do the seemingly impossible — bringing fish from far-away oceans straight to my kitchen, preserving both the freshness and the flavor.

So here’s to fish, and here’s to the technology that has made it possible to enjoy, cheaply and easily, in every household. This is a great achievement of humankind, and I’m delighted to celebrate it.