Backfire Economics: The Economic Damage and Job Losses from Trump’s Trade War Ripple through the Economy

As predicted, the ever-expanding trade wars are hurting far more people than they help.

More examples below of the economic damage from Trump’s tariffs and trade war that is rippling through the economy and raising prices for consumers and businesses, imposing long-term costs on US competitiveness, putting the global market share of American firms at great risk, creating economic uncertainty, postponing capital investments, and eliminating US jobs. 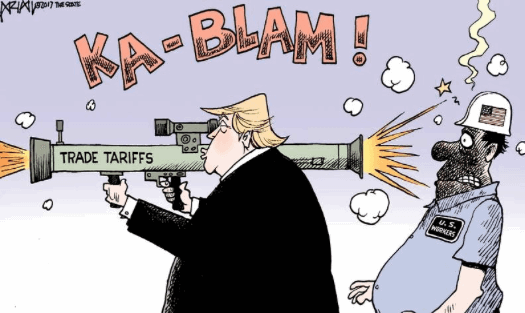 It’s really too bad that there’s no academic discipline with hundreds of years of research, evidence, and theory that could have predicted the significant economic damage that has resulted from the Mercantilist-in-Chief’s misguided trade folly…

1. Trump’s tariffs raise rebuilding costs for wildfire victims. One building association official said the tariffs could raise the price of a typical new home in California by up to $20,000.

Farmers such as myself are starting to see the result. We don’t have much to celebrate when it comes to prices for our commodities. Prices for soybeans, which we grow on our family farm in Mapleton, are down almost 30%. The U.S. Chamber of Commerce estimates that tariffs could cost Minnesota half a billion dollars in exports, including about $100 million in agriculture exports and more than $26 million in soybean exports alone.

We farmers are not a rounding error. Along with many hardworking Americans, we help drive the country’s economy and many of us voted for and support the president. But the trade war comes with steep costs, and if the president doesn’t change direction, rural America will be left to pay the bill.

3. US crop export prices fall in July at the steepest rate since 2011. From The Hill:

U.S. agricultural export prices fell by 5.3% in July as retaliatory tariffs on American crops kicked into effect, according to Labor Department data released today. Prices for U.S. crops sold abroad fell last month at the fastest rate since October 2011, led by a 14.1% decrease in soybean prices. Export prices for corn, nuts, wheat and fruits also fell in July, likely due to tariffs imposed by nations including China, Canada and Mexico, as well as the European Union. 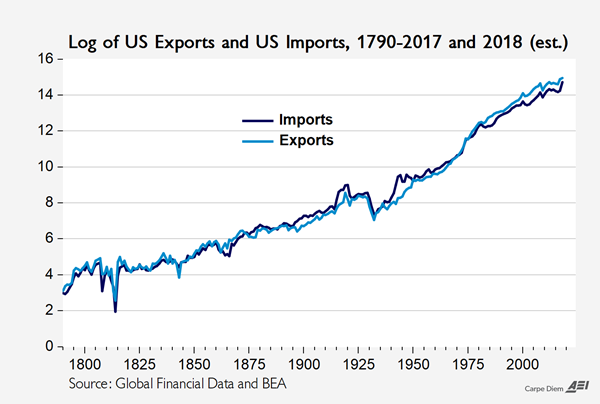 4. Tariffs Could Slow Exports, Not Just Imports. From the Wall Street Journal:

Higher tariffs on imported goods aren’t likely to narrow the U.S. trade deficit because domestic producers are likely to face higher costs for exports, according to a new analysis from the New York Federal Reserve Bank. “The end result is likely to be lower imports and lower exports, with little or no improvement in the trade deficit,” wrote co-author Mary Amiti, an economist at the New York Fed, in a blog post published Monday.

Increasing tariffs on Chinese goods may not only reduce imports of them into the U.S., but the measures could crimp U.S. exports, in part because many large exporters also rely heavily on imports for intermediate goods. U.S. exporters that rely on imported inputs subject to tariffs will be hurt, the analysis concludes, even before taking into account retaliatory tariffs from sanctioned countries.

As I’ve reported before on, via Doug Irwin:

Exports and imports are unmistakably correlated: they rise and fall in lockstep, such that one cannot distinguish between them (see chart above for graphical confirmation of that phenomenon over more than 200 years in the U.S.).

5. Tariffs are harming Wisconsin businesses. Farmers, home-builders, manufacturers, and producers across the state have been negatively impacted by Trump’s steel and aluminum tariffs and subsequent tariff retaliation.

More than 17 local businesses and representatives from manufacturing, agriculture, and building all attended a round table to share the impact of the Trump tariffs locally. The stories they shared testified to the fact that the negative consequences present themselves different in each industry and have ripple effects beyond increasing the cost of foreign steel and aluminum.

The price increases and postponed capital investments are just the immediate effects. The greater long-term concern is that even though the tariffs were intended to encourage buying American-made goods, they along with the retaliatory tariffs will decrease competitiveness of the American economy. Multiple businesses expressed concern that their market share that took decades to build up is now or soon will be gone over night. Cindy Brown works for Chippewa Valley Bean, a company that has been around for over 150 years. She said, “This is the worst thing that the government has done to us in that time.” If the tariffs do not end shortly, employers may be faced with losing their market shares and possibly layoffs to keep afloat.

President Donald Trump’s tariffs on aluminum imports are giving Colombian window-exporter Tecnoglass Inc. a leg up on its U.S. competition. The Barranquilla, Colombia-based company has seen rivals raise prices as much as 10 percent as tariffs increased the cost of importing aluminum to the U.S., said Chief Operating Officer Christian T. Daes. Tecnoglass doesn’t have to pay the duty, since it mainly sells windows assembled in Colombia.

“I love Trump for that,” Daes said, lifting his hands emphatically into the air, during an interview in his office on Colombia’s Caribbean coast.

8. Bonus Video below of Art Laffer, here are some of his “money quotes”:

I’m terrified of a trade war. Protectionism is a killer. It kills your industries that are protected. And it kills your economy.

Do I think we should be in a trade war with China and treat China like an enemy? No. I think of China as America’s best friend. I love China. Without China, there is no Walmart. And without Walmart there is no middle class or lower class prosperity in America.