Are Conservatives Throwing in the Towel on Fiscal Restraint?

Why conservatives shouldn't accept the invasive growth of the government, but instead continue to combat it.

We’ve all heard the refrain these days regarding the misguided notion that “capitalism is broken.” It has even crept into my house, as my oldest daughter has been hearing from her classmates about the virtues of socialism (the dire situation in Venezuela notwithstanding).

This Is Both Startling and Thrilling

It startles me because I wonder where it’s coming from. The best I can imagine is that it’s not talked about at home. If kids take the initiative now to learn about politics and philosophy, though, there’s hope that they will eventually see things in a different light after some life experience.

Being able to convey to my own children the wisdom of the principles codified by our Founding Fathers is a privilege.

The worst I can imagine is that they’re learning about it, absent its inherent individual submissiveness and abdication of responsibility no doubt, from authority figures.

Nonetheless, I’m thrilled, as well. Having the opportunity to teach college students is one thing. Being able to convey to my own children the wisdom of the principles codified by our Founding Fathers is quite another. It’s a privilege.

My mind filled with these thoughts upon reading Peggy Noonan’s recent column in The Wall Street Journal. I’m not a regular reader of her weekend “Declarations,” but the highlighted “Less taxes and spending won’t resolve America’s crisis” caught my attention.

Initially, I thought to myself, “Great; another ‘conservative’ throwing in the towel on fiscal matters.” Sure enough, she taps out: “The federal government will not become smaller or less expensive in our lifetimes.”

A couple of years ago, a younger friend of mine expressed a similar sentiment when he asked, “Shouldn’t we just accept the government we have and work with it?” Even if I deemphasized my stance on one issue in favor of others, I can’t imagine so openly surrendering my principles in the process.

Defense spending should be subject to greater spending discipline, especially when the Pentagon seems prone to losing track of almost a billion dollars.

For the first time in a half-century, the GOP had control of Congress as the 21st century began, and for a majority of it, a Republican presidency. But far from being the “sober-minded … best stewards” of the government who look at spending “coolly,” they became drunk with the power of the purse. Spending rose an average of 7 percent per year, two to three times the rate of inflation.

Perhaps the saddest part of this commentary is that she predicates her entreaty on the certainty of a “terrible day” in our future, an act of war against us using nuclear or biological weapons. This is eerily reminiscent of the justifications we hear to maintain military spending more than twice as high as China, and more than the next seven countries combined.

Only those who live under a rock are unaware of the presence of such weapons. To exploit fears of such nightmare scenarios so that taxpayer resources can be politically directed toward “growing families” is unfortunate, to say the least. Not only should such appeals be rejected, but said defense spending should also be subject to greater spending discipline, especially when the Pentagon seems prone to losing track of almost a billion dollars.

On one of the tests in my macroeconomics class, a question states, “Discretionary fiscal policy is limited by the fact that roughly __% of the federal budget is dedicated to defense or is on autopilot: 30, 50, 70 or 90.” The answer is 70.

How to Combat Growing Expenditures

Rooting out “waste and fraud” is always a noble sentiment, but over the years it’s been reduced to little more than a political bromide intended to placate those committed to a constitutionally-sized government. If Republicans “naturally enjoy” this exercise, as Ms. Noonan alleges, they’ll work with President Trump in his effort to sell off the government’s $1.45 trillion student loan debt to private investors, just to name one example. They could even go a step further and help him make the Department of Education (DoE) leaner.

If we do not adequately address these problems, interest on the national debt will likely blow past 10 percent of the budget.While abolishing the DoE altogether and returning that function to the states where it belongs is the ultimate goal, these practical baby steps would at least prove her right. The primary target of spending reform, however, should be that 70 percent.

Some of what should be done is simply common sense.

Life expectancy, for example, has increased by roughly a decade since the inception of both Social Security and Medicare. Logic dictates that the age of eligibility should follow suit. Also, we should have more choice about our participation in these programs and the way disbursements are administered.

Furthermore, there’s a popular myth that these entitlements have dedicated revenue streams: the payroll tax. The fact is barely a third of Medicare is funded that way, and if demographic trends don’t change, it’s currently projected that Social Security will also have to start dipping into general revenues to help pay out full benefits in fifteen years.

Mark J. Perry of the American Enterprise Institute has a wonderfully illuminative chart (see below) that shows the inflationary effects wrought by government involvement in some of these sectors. It eats into our ability to pursue other worthy personal ventures, not to mention the vicious cycle it perpetuates on the federal budget. 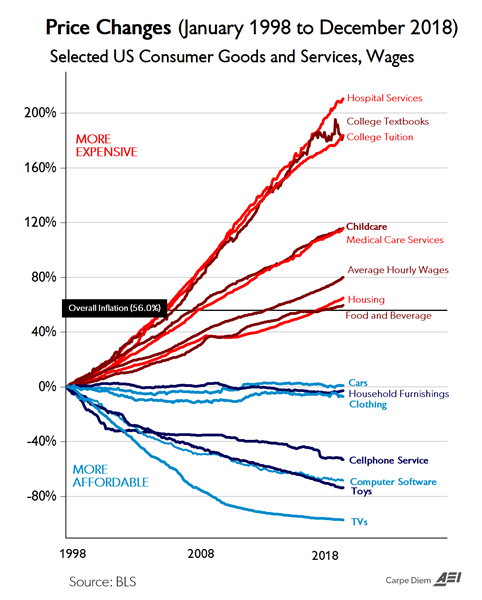 If we do not adequately address these problems, interest on the national debt will likely blow past 10 percent of the budget, and Ms. Noonan’s spending preferences will be further squeezed. This assumes, of course, that hers is not simply one of the initial “conservative” endorsements of the fantasy known as Modern Monetary Theory (MMT).

Where Do We Go from Here?

Ms. Noonan is correct in stating that Republicans are bigger proponents of free-market capitalism. One might quibble that her claim that progressives simply do “not love it” is too restrictive. Some on the left profess to, and genuinely enjoy prosperity, but their obliviousness regarding which policies support or impede it is often staggering.

If we’re stuck with a two-party system, Republicans need to be the party that aggressively represents and promotes independence and personal responsibility, not to mention logic and basic math. It’s been proven before, in 2006 and last year, that they can’t win elections maintaining or adding to the welfare state.

Something else we regularly hear misplaced grousing about is “gridlock.” But gridlock is good. The Founders set up our republic so that time would be required to deliberate changes to the people’s business, and thank goodness considering socialism is back in vogue. Its return is about as welcomed as that of the measles.

By that token, perhaps Ms. Noonan has a point that the government will not be right-sized in our lifetimes. At the same time we teach our kids about our federalist system, though, we should also impart upon them the ideal to work toward.

Christopher E. Baecker teaches economics at Northwest Vista College, is the policy director and editor at InfuseSA, and is a board member for the Institute for Objective Policy Assessment.