And taking themselves to states with lower tax-burdens.

The 2017 federal tax law increased the tax pain of living in a high-tax state for millions of people. Will the law induce those folks to flee to lower-tax states?

For each state, the study calculated the ratio of domestic in-migration to out-migration for 2016. States losing population have ratios of less than 1.0. States gaining population have ratios of more than 1.0. New York’s ratio is 0.65, meaning for every 100 residents that left, only 65 moved in. Florida’s ratio is 1.45, meaning that 145 households moved in for every 100 that left.

Figure 1 (below) maps the ratios. People are generally moving out of the Northeast and Midwest to the South and West, but they are also leaving California, on net.

People move between states for many reasons, including climate, housing costs, and job opportunities. But when you look at the detailed patterns of movement, it is clear that taxes also play a role.

I divided the country into the 25 highest-tax and 25 lowest-tax states by a measure of household taxes. In 2016, almost 600,000 people moved, on net, from the former to the latter.

On the West Coast, California is a high-tax state, while Oregon and Washington fall just on the side of the lower-tax states. 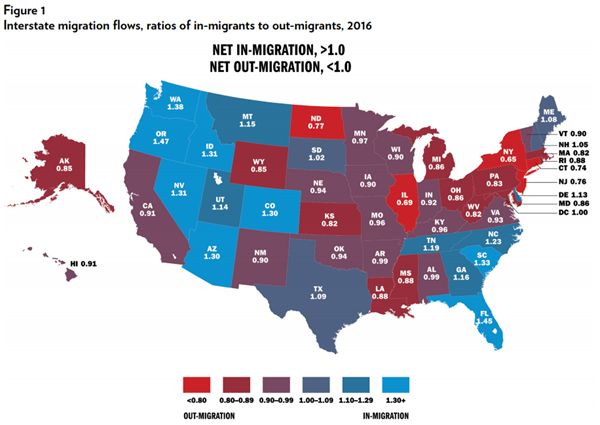