Why Federal Aid for State and Local Activities Should Be Cut

Funding local activities from the federal level creates unneeded bureaucratic costs, which are a loss to the overall economy.

The Economic Development Administration (EDA) is a small agency within the Department of Commerce. Its purpose is to give money to governments and businesses to fund local activities, such as $2 million to “repurpose the West Frankfort Mall” in Illinois and $150,000 for the Brick River Cider company in St. Louis to make “authentic hard cider.”

The EDA has never made sense, as Tad DeHaven and I discuss here, and the Trump administration is right to propose eliminating it.

Funding local activities from the federal level creates unneeded bureaucratic costs, which are a loss to the overall economy. According to the federal budget, the EDA handed out $240 million in grants in 2018 for various local and business activities.

Why don’t communities just keep their own money and spend the whole amount?

The agency’s expenses for salaries, benefits, and other office costs were $39 million. That spending did not go to “economic development,” but rather to support the comfy lifestyle of inside-the-Beltway bureaucrats. Thus, the federal “overhead” costs of the $240 million were 16 percent. The chart (below) shows the overhead cost ratio in recent years.

In an upcoming Cato study, I discuss 18 reasons why federal aid for state and local activities should be cut. One of the reasons is the bureaucratic costs. In 2018, taxpayers living across the nation sent $279 million to D.C. to fund the EDA, of which $39 million stayed in D.C. and only $240 million was distributed back across the nation. Why don’t communities just keep their own money and spend the whole amount?

By the way, if billionaire Wilbur Ross wants to invest in malls and cider companies, he can afford to do so with his own money. 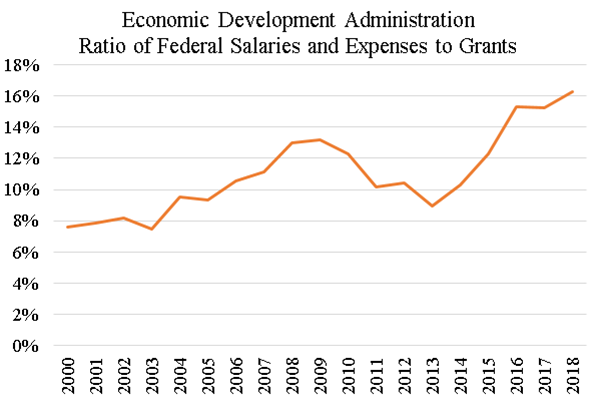 This Cato article was republished via Creative Commons licensing.