America Began with a Declaration of Secession: Why That's Worth Celebrating 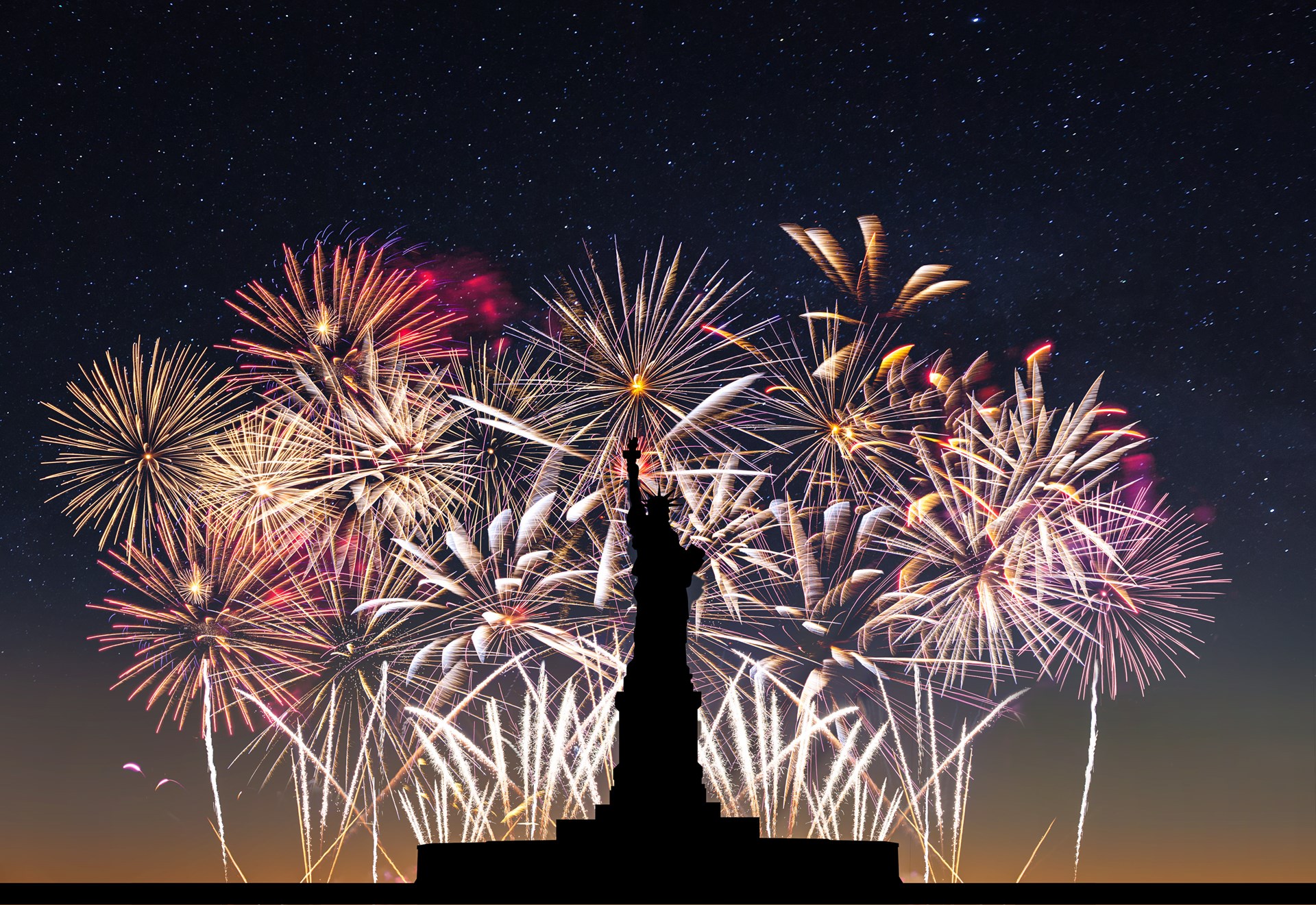 July 4th, Independence Day, presents an opportunity to reflect upon the principles immortalized in the Declaration—principles that, if taken seriously, hold the seeds of sweeping political transformation. The declaration is not only radically libertarian, but radically decentralist.

Independence movements are necessarily decentralist in character, premised on ideas of self-determination, autonomy, and healthy skepticism toward foreign rule. And libertarians are necessarily decentralists to the extent that the principle of individual liberty is served by the practice of decentralism, in which both separate governments and branches within them counter each other, preventing any one force from amassing overweening power.

Secession and federalism are two distinct but related expressions of the decentralist idea, both of which are an important part of the history of the United States. Our country was born through an act of secession, the Declaration disaffiliating the colonies from the yoke of the crown. That document formally set forth the reasons why the American people—British subjects all—chose to “dissolve the political bands which [had] connected them” to the motherland of their forebears.

As a concept in political theory, secession has unfortunately been tarnished by the historical particularities of its association with the Civil War, with the abominable fact of slavery in the Confederacy. But this need not be the case. The right to secede is, in fact, an important natural right and an essential protection against tyrannical government.

Libertarians believe that the individual, too, ought to have the right to secede: that relationships between individuals should be voluntary—like contracts, based on reciprocal promises and obligations. Political power is different: there is no mutual assent as in a true contract.

The relationship between the individual and the state is predicated on a denial of the Declaration’s affirmation “that all men are created equal.” That’s because governments, unique among all human institutions, claim a prerogative that no individual can rightfully possess and no group can create for itself: the right to control another person, to dominate his will through the use of force. No one is or could be obligated to remain in this kind of association. When one finds himself in such an abusive, non-consensual relationship, the Declaration tells us, “it is the Right of the People to alter or to abolish it,” departing for greener pastures.

Stability relies crucially on the experimental dynamism of political, legal, and economic decentralism.

The world recently had a rare opportunity to witness a kind of secession: the United Kingdom’s referendum decision to leave the European Union. The grand experiment in centralized planning that is the European Union finds one of its richest and most important member states departing after almost 45 years.

Perhaps counterintuitively, the kind of uniformity and centralization contemplated and offered by the European Union actually makes the continent and the individual member states more unstable. Stability relies crucially on the experimental dynamism of political, legal, and economic decentralism, in which smaller units decide their own destinies, people and resources gravitating to what has been demonstrated to work. Independent nations needn’t join together under a super state in order to trade and cooperate; they will do so because they recognize that it is in their interest.

Prosperity likewise relies on the individual’s ability to opt out of transactions, communities, and even governments—to force these human designs to compete for the people they are supposed to serve. Legal and regulatory uniformity often aggravates the very problems it is meant to solve: harmful and inefficient rules are more far-reaching in their impact, the broad, remote discretion of regulators more susceptible to big business influence.

Without the right and the ability to exit, there can be no true choice and therefore no true friendship or partnership.

Granted that the shockwaves of Brexit may smart in the short term, with the United Kingdom and its people compelled to reassert themselves and their independence in a way that they haven't needed to for decades. In the long term, though, Britain will be better and stronger: not a mere vassalage of Europe, but the center for trade and innovation it has been for so long. In its trade and immigration policies, Britain will now have the freedom to communicate, negotiate, and trade with the entire world, liberated from the constraints of the EU. Indeed, there is already even talk of Britain dropping the EU-enforced sanctions on Iran.

Britain can be just as much a part of the European civilization as an independent actor, on its own terms, determining its own destiny. As Boris Johnson put it, “We cannot turn our backs on Europe. We are part of Europe.” And indeed, any genuine agreement requires the freedom of each party to enter it and leave it as conscience dictates. Without the right and the ability to exit, there can be no true choice and therefore no true friendship or partnership.

The Power of Exit

The right to secede is thus a necessary condition of all worthwhile human bonds, whether professional or personal, be they between individuals or groups. Smaller units maximize the opportunity for and potential impact of this kind of secession. For freedom to prevail, governments must remain both small and close to those whom they govern, accountable and responsive rather than distant and opaque. Decisions that affect the citizen ought to be made in close proximity to the citizen; within reach, as it were.

This principle is, it turns out, enshrined in Article 5 of the Treaty on European Union, which offers us an important lesson on the practice of politics. Confronted with the strength and majesty of ink on paper, power seems to be everywhere unimpressed, and perfectly able to find a saving construction that clears its path.

The Constitution has been similarly powerless to stem the rising tide of imperious, despotic power, powerless to fulfill the promises and high principles of the Declaration. Independence Day, though, reminds us of the revolutionary remedies set forth in the Declaration. Secession and outright abolition remain available to us according to a law that cannot be abrogated by kings, legislatures, or any other government body—according, that is, to natural law.

Secession Movements Around the World

Just as the peaceful forces of technology and commerce have increasingly connected the world, its people have felt the need to reassert their independence in the face of meddlesome, monolithic governments. Thus do we find secessionist movements all over the world.

Here in the United States, Texas and Vermont have long played host to active secessionists who see their home states as culturally distinct and maintain their right to self-determination. The Texas and Vermont case studies reveal the attractiveness of the secession solution to elements of both the political left and right. As a response to the excesses of far-away power centers, secessionism appeals to people with a wide range of substantive political commitments and ideologies.

In Canada, the Quebec sovereignty movement has similarly agitated for political independence, citing both cultural and religious differences from the rest of Canada (which we might call British Canada).

The Catalonia region, already one of Spain’s several “autonomies,” continues to fight for its independence, even as the Spanish government has consistently worked to hinder its efforts. And Brexit has again buoyed the spirit of Catalan separatists, with the head of the region’s government, Carles Puigdemont, saying, “[Brexit] demonstrates that it is perfectly possible to take a decision about sovereignty as all other countries do.”

These are just a few of the many such movements operating in the world today, hoping to peacefully withdraw from larger political entities that are perceived as not representing their views, cultures, and interests.

The Ultimate Declaration of Self-Rule

Carried to its conclusion, this right to secede—to divide and devolve political power ever further—can extend not only to nations and regions, but to still smaller political units like counties and cities, culminating finally in the ability of each individual to live as a self-governing sovereign. As Murray Rothbard wrote:

[O]nce one concedes that a single world government is not necessary, then where does one logically stop at the permissibility of separate states? If Canada and the United States can be separate nations without being denounced as being in a state of impermissible “anarchy,” why may not the South secede from the United States? New York State from the Union? New York City from the state? Why may not Manhattan secede? Each neighborhood? Each block? Each house? Each person? But, of course, if each person may secede from government, we have virtually arrived at the purely free society, where defense is supplied along with all other services by the free market and where the invasive State has ceased to exist.

The world’s political classes, seeking to consolidate their power, can generally be relied upon to stand in the way of such movements. Like their counterparts in Washington, the EU’s progressive and socialist champions believe that centralized power, entrusted to qualified experts, can be made to serve worthy ends. It would seem, though, that power is the master rather than the servant, that it has ends of its own.

The world must relearn the libertarian lessons of the Declaration. Salutary global interconnectedness need not entail political centralization of the kind represented by the European Union; in fact, it depends on just the opposite, the escape hatch provided by the right to secede from, or to abolish, a government that has gone beyond its mandate, violating our rights rather than protecting them.

David S. D’Amato is an attorney and independent scholar whose writing has appeared at the Institute of Economic Affairs, the Future of Freedom Foundation, the Centre for Policy Studies, and the Institute for Ethics and Emerging Technologies.