America Accepts a Tiny and Shrinking Share of Refugees, Displaced

The Government Will Not Let American Charity Rise to the Occasion

For several years, the United Nations High Commissioner for Refugees (UNHCR) has raised the alarm about the unprecedented number of refugees and displaced people around the world, the worst crisis since World War II. Yet during this time, the United States has still failed to respond, accepting a shrinking share of this growing population.

This reinforces an incredibly jarring fact: the United States establishes its refugee limit without regard to the actual number of refugees around the world. America’s openness to refugees should be adjusted in order to adequately respond to the global need for resettlement.

Ideally, American citizens would be able to step up and sponsor refugees, bringing them into the United States and granting them the opportunity to rebuild their lives. But the current reality is that the government controls all refugee resettlement, bureaucrats dither, Congress refuses to act, and refugees continue to exist in a perilous limbo.

Last year, Secretary of State John Kerry apparently thought it was time that the United States respond to crisis, and  announced an increase of the refugee quota to 85,000 for this year. This promise has yet to be realized, as the United States has actually accepted fewer refugees this year than at this same time last year.

But even if the quota were filled this year, and filled again next year to the 100,000 Secretary Kerry called for, it would be woefully short of the historic share of refugees and displaced persons that the United States has taken in the past.

On average, America’s refugee program has accepted roughly 0.25 percent of the United Nations High Commissioner for Refugees’ (UNHCR) population of concern—displaced persons and refugees—each year since 1993. This year, that population is almost 60 million people, so if the State Department stuck to this acceptance rate, it would set a target of 138,000 for next year. 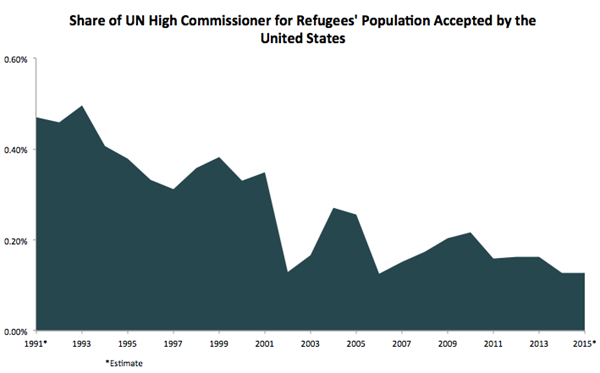 But even this increase is far less than the share of refugees that the United States has taken in its recent history. In 1993, for example, the U.S. refugee program accepted almost four times as high a share of UNHCR’s population as it did last year. Today, the same share would be roughly 272,000 refugees.

Some people may well ask whether the United States can integrate that many refugees. Although every refugee group is different, there are many more Americans today to aid the integration process than there were back in the early 1990s. The United States admitted twice as many refugees per capita from 1990 to 1994 than it has over the last five years.

Despite the fact that more Americans than ever want to help, the U.S. government has drastically cut down the acceptance rates of refugees. If Americans were able to sponsor refugees, the response would have very likely put the government’s limited reaction to shame.

That is precisely what has happened in Canada. Through its private refugee sponsorship program, tens of thousands of Canadians have raised money through a diverse range of means from filling Church offering plates, to giving up their furniture, to canceling weddings. And remember Canada is a tenth of the size of the United States.

The United States has a storied history of accepting refugees, and much can be learned from it. We should not be abandoning this history in the midst of the current devastating crisis.