We have a lot to be thankful for on Thanksgiving: an abundance of cheap, affordable food. 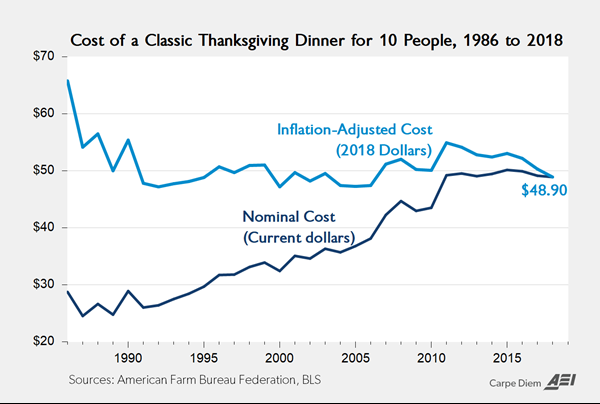 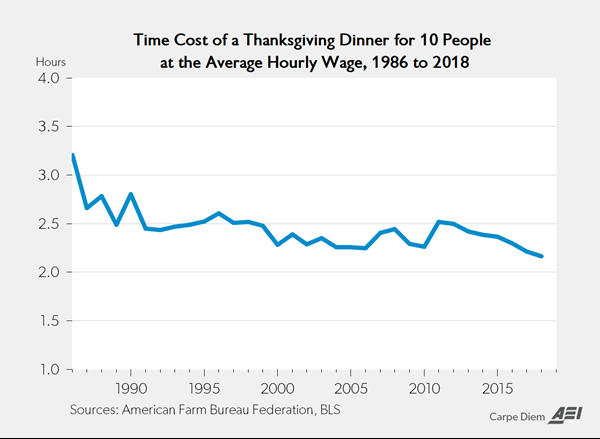 From today’s annual report and press release from the American Farm Bureau Federation (AFBF) on the cost of a classic holiday meal, "Thanksgiving Dinner Cost Down for Third Straight Year":

The American Farm Bureau Federation’s 33rd annual survey of classic items found on the Thanksgiving Day dinner table indicates the average cost of this year’s feast for 10 is $48.90, or less than $5.00 per person. This is a 22-cent decrease from last year’s average of $49.12. “Since 2015, the average cost of Thanksgiving dinner has declined steadily and is now at the lowest level since 2010,” said AFBF Chief Economist Dr. John Newton.

The featured food on most Thanksgiving tables – the turkey – cost slightly less than last year, coming in at $21.71 for a 16-pound bird. That’s roughly $1.36 per pound, down 3 percent from last year. The survey results show that retail turkey prices are the lowest since 2014. “Thanks to an ample supply, turkey remains affordable for consumers, which helps keep the overall cost of the dinner reasonably priced as well,” Newton said.

A total of 166 volunteer shoppers checked prices at grocery stores in 37 states for this year’s survey. Farm Bureau volunteer shoppers are asked to look for the best possible prices, without taking advantage of special promotional coupons or purchase deals, such as spending $50 and receiving a free turkey. Shoppers with an eye for bargains in all areas of the country should be able to purchase individual menu items at prices comparable to the Farm Bureau survey averages. Farm Bureau’s survey menu has remained unchanged since 1986 to allow for consistent price comparisons.

1. Compared to $49.12 last year, the cost this year for a classic Thanksgiving Day dinner for 10 people is $48.90, and this is the third year in a row that the cost of a Thanksgiving dinner has decreased (see dark blue line in top chart). That decrease in the price for a turkey dinner in 2018 compares to increases over the last year of 2.53 percent for overall consumer prices and 3.20 percent for average hourly earnings.

3. Adjusted for inflation, the cost of a classic Thanksgiving dinner this year is 2.7 percent less expensive than last year, and the lowest since 2010 (see light blue line in top chart).

5. Measured in time worked at the average hourly wage for all private production workers of $22.89 in October 2018, the “time cost” of this year’s classic turkey dinner is only 2.14 hours, down by 3.2 percent from 2.21 hours last year and at the lowest level since 1986 when this annual AFBF report started (see bottom chart). Compared to 1986 when the average American would have worked 3.21 hours to earn the income necessary to purchase the turkey dinner for 10, the “time cost” for a worker today (2.14 hours) is 33.3 percent lower.

Bottom Line: The fact that a family in America can celebrate Thanksgiving with a classic turkey feast for less than $50 and at a “time cost” of only 2.14 hours of work at the average hourly wage for one person means that we really have a lot to be thankful for on Thanksgiving: an abundance of cheap, affordable food. The average worker would earn enough money before their lunch break on just one day to be able to afford the cost of a traditional Thanksgiving meal. Compared to 1986, the inflation-adjusted cost of a turkey dinner today is more than 25 percent cheaper, and 33.3 percent cheaper measured in the “time cost” for the average worker. Relative to our income and relative to the cost of food in the past, food in America is more affordable today than almost any time in history.