A Reminder on Socialism and Hunger

An Ideology that Starved Tens of Millions

Socialism is back in vogue, especially among America’s college-educated youth. They are too young to remember the Cold War and few study history. It is, therefore, timely to remind the millennials of what socialism wrought — especially in some of the world’s poorest countries.

Those of us who remember the early 1980s will always remember the images of starving Ethiopian children. With bellies swollen by kwashiorkor and eyes covered with flies, these were the innocent victims of the Derg — a group of Marxist militants who took over the Ethiopian government and used starvation to subdue unruly parts of the country.

Between 1983 and 1985, some 400,000 people starved to death. In 1984, Derg earmarked 46 percent of the gross domestic product for military spending, thereby creating the largest standing army in Africa. In contrast, spending on health fell from 6 percent of GDP in 1973 to 3 percent in 1990.

Predictably, the Derg blamed the ensuing famine on drought, although the rains failed many months after the food shortages began. In 1991, the Derg was overthrown and its leader, Mengistu Haile Mariam, escaped to Zimbabwe, where he lives, under government protection and at the taxpayers’ expense, to this day.

Speaking of Zimbabwe, in 1999, Robert Mugabe, the 92-year-old Marxist dictator who came to power in 1980, embarked on a catastrophic “land reform” program. The program saw the nationalization of privately-held farmland and the expulsion of non-African farmers and businessmen. The result was a collapse of agricultural output, the second highest hyperinflation in recorded history that peaked with inflation at 89.7 sextillion (or 89,700,000,000,000,000,000,000) percent per year and an unemployment rate of 94 percent.

Thousands of Zimbabweans died of hunger and disease despite massive international help. As was the case in Ethiopia, the government of Zimbabwe blamed the weather, stole much of the aid money, and denied food and medicine to its political opponents. Plus ça change, plus c’est la même chose.

I was reminded of that parade of horribles when I came across Benjamin Zycher’s table of the greatest famines of the 20th century. As Zycher notes, six out of the 10 worst famines happened in socialist countries. Other famines, including those in Nigeria, Somalia and Bangladesh, were partly a result of war and partly a result of a government’s economic mismanagement. 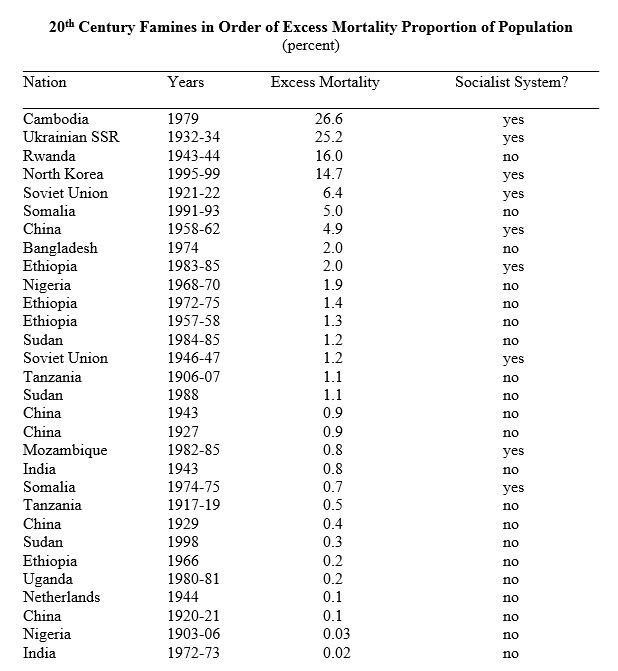 The American students growing interested in “socialism” today are too young to remember what the world actually looked like the last time socialism held sway. In their lifetimes, famine has all but disappeared. Today, there is not a single ongoing case of famine in the world — not even in war-torn places like Syria.

Why did famines disappear?

First, because agricultural production is at an all-time high and food has been getting cheaper, not dearer. Between 1960 and 2015, the world’s population increased by 143 percent. Over the same time period, the price of food has gone down by 22 percent.

Second, humanity has grown richer and can afford to buy more food. Over the last 55 years, the real average annual per capita income in the world rose by 163 percent.

Third, communications and transport have massively improved and it is now possible to deliver food aid anywhere in the world in a relatively short time.

Fourth, globalization and trade ensure that food can be purchased by anyone, anywhere.

Africa has been the main beneficiary of that salutary development. In 1961, Africans consumed on average 1,993 calories per person per day. In 2011, which is the last year for which the World Bank provides data, they consumed 2,618 calories. Globally, food consumption increased from 2,196 calories to 2,870 calories. Even in Ethiopia, food consumption has increased. In 1993, two years after the overthrow of the Derg, Ethiopians consumed 1,508 calories per person per day. In 2013, they consumed 2,131 calories.

Wherever it has been tried, from the Soviet Union in 1917 to Venezuela in 2015, socialism has failed. Socialists have promised a utopia marked by equality and abundance. Instead, they have delivered tyranny and starvation. Young Americans should keep that in mind.