Why Cosmetic Procedures Are Getting Cheaper

Between 1998 and 2018, the average cost of cosmetic procedures rose at a slower pace than inflation.

According to Perry’s analysis, inflation in the United States amounted to 54 percent over the last 20 years. Over the same time period, the nominal cost of 19 cosmetic procedures increased by 34 percent (unweighted average) or 32 percent (weighted average). In inflation-adjusted terms, therefore, the cost of cosmetic procedures fell. In contrast, hospital and medical care costs rose by 202 percent (four times the rate of inflation) and 110 percent (twice the rate of inflation) respectively. As Perry notes,

The competitive market for cosmetic procedures operates differently than the traditional market for health care in important and significant ways. Cosmetic procedures, unlike most medical services, are not usually covered by insurance. Patients typically paying 100 percent out-of-pocket for elective cosmetic procedures are cost-conscious and have strong incentives to shop around and compare prices at the dozens of competing providers in any large city.

Let’s interrogate Perry’s data a bit differently. Goods and services can become more affordable in two ways. First, the money price can decrease. Second, hourly income can increase. Note that incomes tend to rise faster than inflation because people tend to become more productive over time. That’s a good thing, for as the Scottish economist Adam Smith noted in The Wealth of Nations 243 years ago,

The real price of everything…is the toil and trouble of acquiring it…What is bought with money or with goods is purchased by labor.

The time price captures both the price fluctuations and the value of labor. As such, it better reflects the availability of goods and services in any given society. The cost of the 19 cosmetic procedures relative to the wages of unskilled laborers fell by 26 percent on average. The time price can be defined as “the amount of time that a person has to work in order to earn enough money to buy something.” To calculate the time price, the nominal (or current) money price is divided by nominal hourly income. Dollars and cents are thus converted to hours and minutes of labor.

Having obtained the nominal prices of the 19 cosmetic procedures from Perry’s report, we then acquired the average hourly income data from www.measuringworth.com. This source, which is curated by Lawrence H. Officer of the University of Illinois at Chicago and Samuel H. Williamson of Miami University, includes nominal hourly wage rates of unskilled laborers and nominal hourly compensation rates of blue-collar workers. (On average, blue-collar worker receive about a third of their total compensation in benefits, including bonuses, paid leave, and company contributions to insurance and retirement plans.) What did we find? 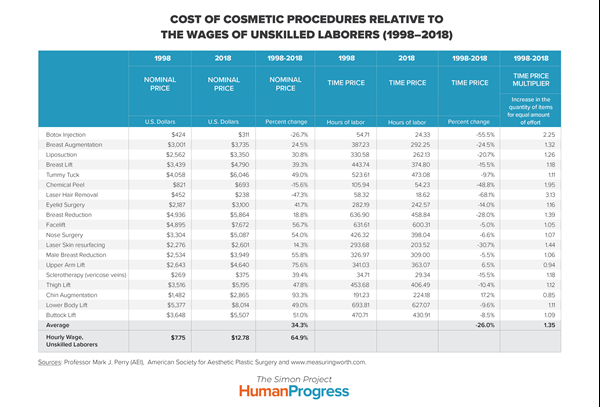 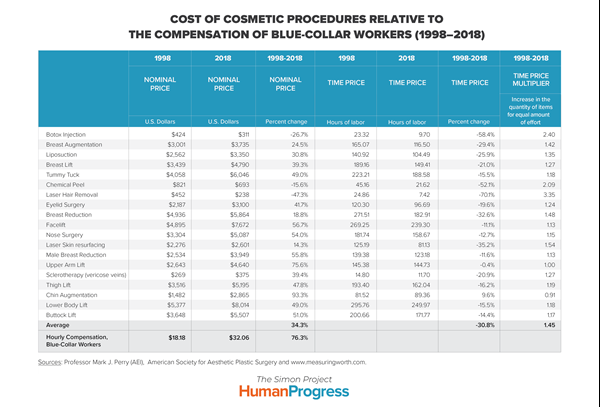 Finally, consider an upskilling worker, who is defined, solely for the purposes of this article, as an employee who started as an unskilled laborer in 1998, but acquired additional skills and ended up as a skilled worker in 2018. Such a worker would see the cost of 19 cosmetic procedures decline by 71 percent on average. For the same amount of labor he or she had to work to earn enough money to purchase one item in our basket of cosmetic procedures in 1998, he or she could buy 3.4 items in 2018. 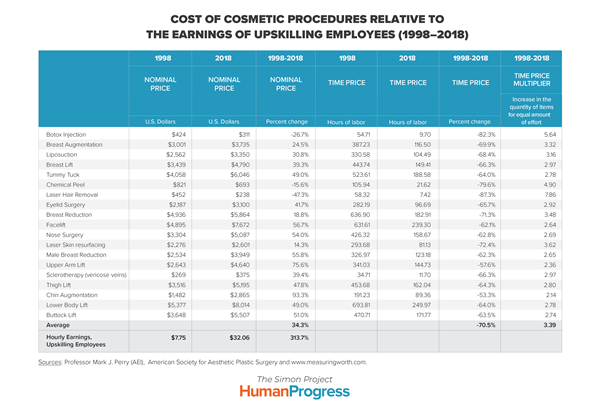 Total nominal health care spending in America rose from $1.2 trillion in 1998 to $3.65 trillion in 2018. That amounts to 204 percent. In other words, the overall healthcare costs rose 6.3 times faster than Perry’s weighted average of cosmetic procedures (32 percent). If the overall provision of health care in the United States were as cost-efficient as the delivery of cosmetic procedures, Americans would have spent $1.58 trillion (in 1998 dollars) on health care in 2018. That amounts to $2.46 trillion in 2018 dollars. Thus, the savings last year would have amounted to $1.19 trillion.