A Federal Gas Tax Will Only Fuel Bureaucracy

In today’s dollars, the real gas tax rate has risen substantially since the early 1980s.

The Trump administration will release its long-awaited infrastructure plan in coming weeks. The plan is expected to include $200 billion over 10 years of federal funding. Where will the money come from? The president has pondered raising the federal gas tax.

Revenues from the 18.4 cent-per-gallon federal gas tax go into the Highway Trust Fund and are then dished out to the states. But 98 percent of U.S. streets and highways are owned by state and local governments, and the owners should do the funding. States that need to improve their highways can increase their own gas taxes, sales taxes, issue debt, add user charges, or pursue public-private partnerships.

There is no advantage in raising federal highway revenues rather than the states raising their own. The states can tackle their own infrastructure challenges, and about half of them have raised their transportation taxes in the past five years.

Supporters of a federal gas tax hike say that the tax has not been raised since 1993, and its real value has been eroded by inflation. That is true. But the federal gas tax rate more than quadrupled between 1983 and 1993 from 4 cents to 18.4 cents, as shown in the chart below. The 4-cent rate would be 9.8 cents in today’s dollars, so the real gas tax rate has risen substantially since the early 1980s.

The chart shows that the states have steadily raised their own gas taxes in recent years. API discusses state gas taxes here, and they emailed me data back to 1994. (I’ve interpolated a few missing years). The state average — currently 33 cents — includes both gasoline excise taxes and other taxes on gasoline.

I hope Trump does not go down the road of gas tax increases. Pumping more money through federal bureaucracies would fuel more top-down planning and inefficiency. Funding for highways and other infrastructure should be handled by state and local governments and the private sector.

More on infrastructure here and here. 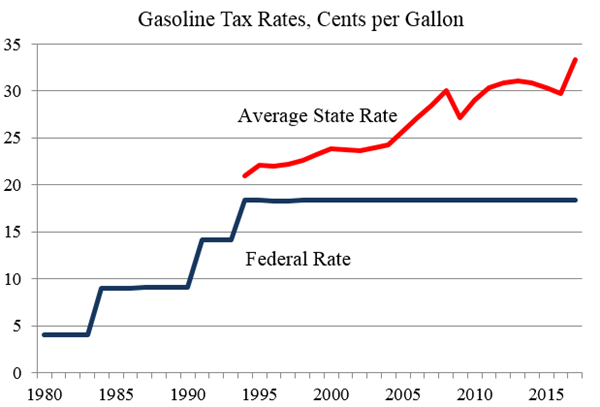