Far more American workers produce services rather than goods, so why do we ignore them when it comes to trade policy?

The chart below shows that the number of goods-producing jobs in the US has remained relatively flat since WWII at about 20 million, while the number of service-sector jobs has increased nearly seven-fold during that time period from fewer than 19 million in 1939 to nearly 128 million in February 2018. And yet, for several generations, we seem determined as a country to try to save or bring back manufacturing/factory jobs that never really existed at levels very far above today’s level for goods-producing employment. At the same time, there’s not much attention paid to promoting or celebrating the service sector, which is really America’s only job-creating sector that has added an average of 1.62 million jobs annually (81 million jobs in total) over the last half-century, while the goods-producing sector shed 1.8 million jobs. 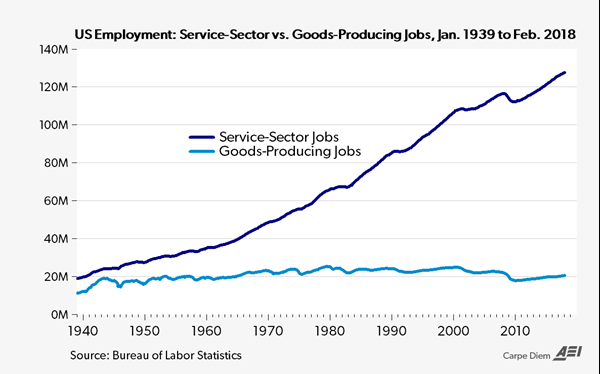 That issue and paradox were discussed in two recent articles featured below.

1. From the New York Times article “Most Americans Produce Services, Not Stuff. Trump Ignores That in Talking About Trade” by Neil Irwin:

You probably work in the service sector. This seems like a safe assertion, as 86 percent of private-sector jobs in the United States are in services. By contrast, “goods-producing” jobs like logging, mining, construction, and manufacturing accounted for only 20.5 million jobs last month, in a nation with 148 million total positions (see chart above).

If we’ve guessed right about your occupation, the question for you and 128 million fellow service workers—a very broad category that includes retail clerks, truck drivers, architects, bankers, doctors and more—is whether the Trump administration cares about your economic fate.

The risk is that if trade negotiators follow the president’s lead and focus entirely on obtaining more advantageous treatment for American goods-producing industries, it could come at the cost of concessions that damage industries that employ far more people.

…for that great majority of people who work in service industries, it might be reassuring if the president himself acknowledged more readily that there’s more to a modern economy than making physical stuff.

2. From the article “America’s Strength in Services Promises Trade Success” by John G. Murphy, senior vice-president for international policy at the US Chamber of Commerce:

George Orwell famously wrote that “to see what is in front of one’s nose needs a constant struggle.” This statement is certainly true for the vast and often overlooked world of trade in services. Consider:

Clearly, a trade agenda that focuses exclusively on manufacturing and agriculture would leave money on the table. To capitalize on America’s tremendous strengths in services, the Trump Administration should jumpstart the Trade in Services Agreement (TISA) negotiations.

The TISA aims to remove barriers to trade in services among 50 countries that represent more than two-thirds of world trade in services. When the TISA negotiations began three years ago, the Chamber and other business groups advised that its chief goals should be to expand access to foreign markets and bar discrimination against U.S. companies. In addition, it should lift foreign governments’ limits on U.S. investments in their services sectors.

The TISA also represents an opportunity to craft enforceable rade rules that reflect how data has become the new currency of international commerce. That’s why the TISA must include enforceable rules to ensure that enterprises and individuals can move data across borders in a reliable and secure manner.

To illustrate the point, a recent Chamber study estimated that reducing market and regulatory barriers to cross-border information and communications technology (ICT) services could boost global GDP by an impressive $1.72 trillion. This finding confirms that international data flows have become a vital catalyst of global economic growth—and American companies and American technology are at the forefront.

It’s a great point that all of the incessant hand-wringing about the loss of US factory jobs, the decline of the Rust Belt, and the supposed “hollowing out of American manufacturing,” and the subsequent attempts to save or bring back those jobs with protectionist trade policy, miss the bigger picture of the US labor market, which is a job-creating machine when it comes to the dynamic, thriving service-providing sector that has added an average of 4,500 new jobs every day to the nation’s labor force over the last half-century.